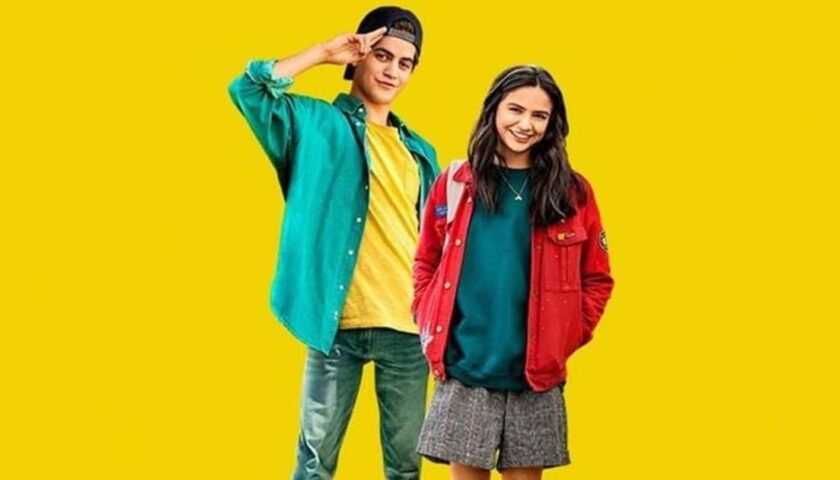 ‘Anonymously Yours’ is a Netflix original film, that was released on December 10, 2021, shot in Spanish. The teen rom-com is directed by Maria Torres and written by Wendy Mora Reyes.

The Spanish movie makes for a great one-time watch; you won’t realize where an hour and a half goes by so quickly. The film can be categorized as both a drama and romance, with Harold Azuara (as Ritchie), Annie Cabello (as Valeria or Vale), Estefi Merelles (as Regina), Alicia Vélez (as Lina), and Ralf (as Alex).

Who knew texting the wrong number would be the start of a wonderful friendship and high school love story? ‘Anonymously Yours’ captures the essence of an accidental romantic rapprochement in all its glory.

The premise of the new Netflix movie may seem a little too familiar — a shy boy meets an introverted girl — and while they can’t stand the sight of each other, the two have also been secret pen pals without even realizing it. Although this might seem like the genre staple for most movies these days, ‘Anonymously Yours’ somehow finds its way into the hearts of all those who once used to be high school students.

Valeria, called Vale for short, (played by Annie Cabello) is a senior in school. Her love for creating videos and movies is beyond her love for life itself. She’d do anything to be involved in the world of cinema, despite her parents constantly pushing her to take over the family business. Vale doesn’t have a lot of friends, save for her childhood best friend, Regina (Esteffi Merelles) and her overprotective brother, Ritchie (Harold Azuara).

The charming boy who started texting Vale in the first place is none other than the new kid in school, Alex (played by Ralf). He is an absolute sweetheart, studious, and great at sports! An all-rounder but also, quite shy. While he does know how to make Vale laugh on texts, the two don’t exactly start on the right foot when it came to real life. When the two have to partner up during detention, they don’t interact with one another, but instead, choose to text their “Anonymous” phone friend!

That one message sent by mistake causes Vale and Alex’s lives to intertwine, although he is the very same guy in her school, who she bumped into, making Alex spill his coffee all over himself! The two continue to text each other, all the while having decided not to enclose any personal details. In doing so, they soon develop a virtual friendship. In due course of time, both Alex and Vale notice that they have feelings for their texting buddy, who neither of them has “technically” met.

In hindsight, Vale and Alex are the true definitions of 21st-century high school romance. In a world where people basically live on their phones, this digital rom-com is sure to make you reminisce about your school days. ‘Anonymously Yours’ connects the world of high school with romance, as most teen movies do, but takes it up a notch. This movie may sit well with most teens as the storyline depends on the constant texting, the need for wi-fi, and obsessive checking of phones to check for replies but could feel annoying to those from an older age group. It’s safe to say that this one aspect was probably the only drawback in an otherwise adorable movie.

Having said that, the brilliant high school setting is definitely what makes this film both nostalgic and unique. During school, the pressure of being a teenager is tough in itself, not to mention the constant added nagging of parents, and these struggles are timeless, iconic, and universal. A takeaway here would be that teenagers all over the world are still constantly evolving, in terms of communication.

In Vale’s case, she was one to submit a video essay instead of a written one, to defend her passion but when it came to making her parents understand that following their expectations was not something she wanted. Her sharp video-making skills do come in handy when she created one to tell her parents that she wants to pursue filmmaking, whilst slightly snubbing the family elevator business with broken hearts and sad faces on the video. The beauty of this film lies in the unknown, so to say. In yesteryears, letters were exchanged to profess one’s love. In this era, it’s texting, and if you’re lucky, having that blossom into something really special and meaningful!