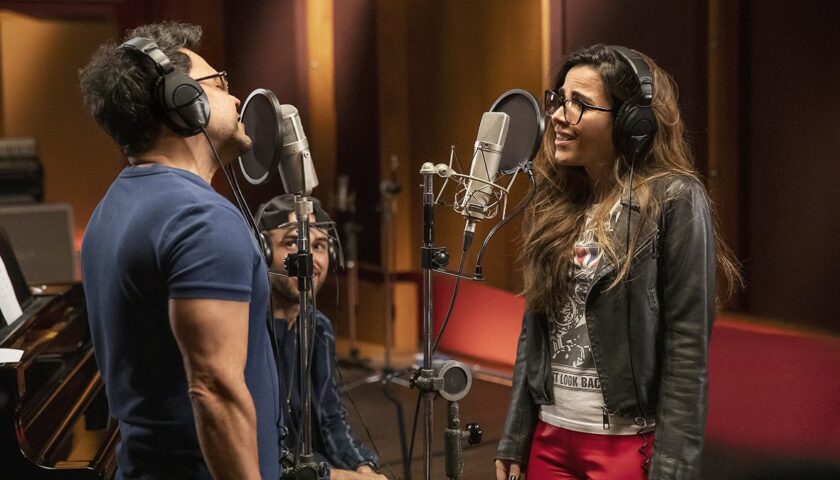 Zeze Di Camargo is one of Brazil’s most famous singers. Born Mirosmar Jose de Camargo to a farming family in Pirenopolis, a town in the central-western state of Goias, “Zeze” and his brother Welson David di Camargo (“Luciano”) began singing and performing in the country-inflected sertanejo style popular in the region. 30 years and 50 million records sold later, the music of Zeze di Camargo & Luciano remains wildly popular, and Zeze is a rich man. But all those decades of singing, recording, and touring took a toll on his family life. He was largely absent as his children Wanessa, Camilla, and Igor grew up, and his career in the public eye and the infidelities that came with it ultimately broke up his marriage, too.

As The Family That Sings Together begins, Zeze is attempting to slow down a bit and reconnect with his kids. He’s writing and recording an album with Wanessa, who is a well-known singer in her own right, and father and daughter also visit the Di Camargo family plot in rural Pirenopolis, where Zeze was raised by his mother and beloved, recently-departed father. As he invites his extended family to his own well-appointed farm and ranch in Araguapaz for some much-needed R&R and communal barbecuing, Zeze’s efforts at reconciliation confront the old wounds of separation, divorce, and chronic lack of affection head on.

Igor and Wanessa aren’t shy about detailing how absent Zeze was from their early lives. And it clearly grates on him, even as he declares his wish to be better. But at the same time, Wanessa says she got into singing and recording music as a means of becoming closer to her father, and when the barbecue gives way to an informal jam session full of sertanejo traditionals and new favorites, it’s obvious that music and its connectivity across the generations really is the conduit that helps keep the Di Camargos together.

“I now have a chance to spend time with them,” Zeze says in a cutaway interview during the first episode of The Family That Sings Together. “Our relationship will change after this series, for sure.” The Brazilian star says this with seeming conviction, but there might be cracks in his resolve. Throughout “A New Beginning At Every Turn,” the first episode of this five-part series on the Zeze and his relationships with the greater Di Camargo family, he spends half his time speaking to the camera about wishing for repair and the other half demurring from things like participating in a game of charades or admitting head-on that he really has been an absentee father to his children.

There’s clear friction, too, between his life with new girlfriend Graciele Lacerda and how his grown children with ex-wife Zilu Godoi fit interact with it. And speaking of Godoi, the very public spectacle of their divorce is a storyline here, too, one juiced with headline drama and the sense that the new reality for the Di Camargo family is still quite raw. (Wanessa and Igor spend a sequence in the first ep talking about all the places on Zeze’s farm where they see themselves with their mother, who he hasn’t specifically allowed to return to the property.) Music is definitely a throughline for this group, and a means of creating harmony between the generations. But there’s a lot going on beneath the surface, too, and that should give Family That Sings Together some drama-filled reality show legs.