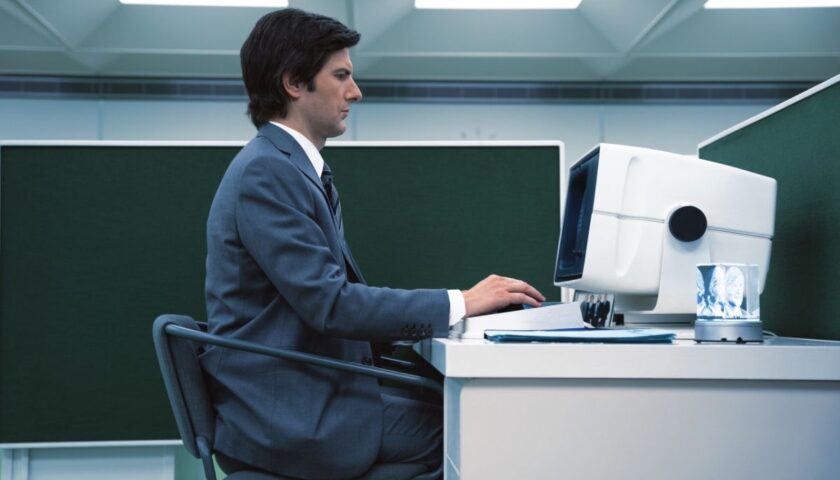 Midway through the “Severance” premiere, senior manager Ms. Cobel (Patricia Arquette) is in the midst of disciplining new department head Mark S. (Adam Scott). Having already dangled a carrot to no avail, she decides to pick up the stick. “You know, my mother was an atheist,” Ms. Cobel explains, walking around her desk to stand over her confused subordinate. “She used to say there was good news and bad news about hell: The good news is that hell is just the product of a morbid human imagination. The bad news is whatever humans can imagine, they can usually create.”

The vague yet haunting threat is mostly lost on Mark, but it’s clear to viewers. Lumon — the massive, mysterious conglomerate Mark and Ms. Cobel work for — has created its own little circle of hell: the “severed” floor, where a select group of employees volunteer to bifurcate their memories between what happens at work and what happens at home. That means when Mark starts the day sitting in the parking lot, weeping uncontrollably, he has no memory of why (or that he was even crying) by the time he takes the elevator down to the windowless bowels of his office. A switch is literally flipped as he moves between floors, activating an implant in his brain that separates Mark from his life outside of Lumon. When he goes home at 5:15 p.m., those memories are restored, but he then loses any recollection of what happened underground.

Both an excellent premise for a conspiracy-thriller and an eerily believable bit of science-fiction, the practice of severance is just one brilliant idea in a series built from many. Created and executive produced by Dan Erickson, the Apple TV+ series showcases its own exciting imagination, from building a unique office environment to fitting a sinuous story into nine expertly calibrated episodes. Ben Stiller directs six of those entries (notably, the first and final three) with an unsettling symmetry; balancing and unbalancing compositions in order to undercut the inherent comforts of routine and uniformity. Paired with the surprising particulars of Lumon’s culture (nothing can prepare you for the parties) and meaningful narrative twists, “Severance” condemns a hellish corporate culture while remaining suspenseful, enlightening, and oh so much fun.

It also takes full advantage of a talented ensemble. At Lumon, Mark is joined by Dylan (Zach Cherry), Irving (John Turturro), and fresh recruit Helly (Brit Lower). Dylan is immediately recognizable as someone too smart for his job. His desk is covered with company rewards — erasers (“mostly decorative, since we don’t have pencils”), finger traps, etc. — all earned for finishing ahead of schedule, all covered in the company’s blue and white branding. Irving, meanwhile, looks down on these perks as “children’s” toys, preferring to realize his reward in an honest day’s labor. By-the-book and loyal to his Lumon overlords, Irving still suffers from strange visions dreams: black ooze spilling from the cubicle walls, covering his ’80s era computer monitor and keyboard, threatening to envelop him along with his station.

Rounding out the Macrodata Refinement department is Helly. New to the team, she serves as our initial, empathetic audience proxy, asking many of the questions we want answered. What do they do at Lumon? No one knows. Why did they decide to be severed? No one will tell them. Who are they? A first name and last initial are all they get (Helly R., Mark S., etc.). Personal details of their lives outside are only doled out in general sentiments during “wellness checks,” but Helly isn’t willing to wait. She tries to leave. She tries to quit. But she can’t. Only “outies” (what employees are called when outside the office) can resign; “innies” can ask to leave, but those requests are almost never approved. After all, if you don’t have to remember the nine worst hours of your day, why would you ever leave?

Or so one theory goes. Claims like these are enough to turn even the most gullible individual into a skeptic, but “Severance” is clever in revealing which obstacles are put in place by shady company strategies and which are self-inflicted. Erickson’s story zeroes in on how much corporations can take from their employees and how little is offered in return, without letting individuals completely off the hook. The result is a consistently tense thriller broken up by peculiar humor and genuine humanity. Stiller’s contributions are immense. His biting, satiric wit is all over “Severance” — which marks his second-straight prison break story after 2018’s “Escape at Dannemora” — but its the way his camera works with the savvy production design (courtesy of Jeremy Hindle) that truly pops. The oners down an endless maze of white corridors. The way cubicle walls slide up and down to trap workers in tight frames. The contrast between the timeless stasis of antiseptic office life and the bristling cold of a messy existence above ground. It’s a striking, immersive design, if you’re on or off the clock.

As the season progresses, the practice of severance becomes more and more crucial to the series’ world-building. The procedure is both highly controversial and growing in popularity. Lumon may have invented the mind-altering device, but other companies (and perhaps even the government) are looking to use it on their own people. But as the stakes tied to severance’s perceived success skyrocket, so do the personal concerns of each employee. Scott, who played the soulless corporate villain gutting Life Magazine in Stiller’s 2013 feature “The Secret Life of Walter Mitty,” flips the script and delivers career-best work. Subtle, precise, and always relatable, he imbues each version of Mark with distinct physicality, while maintaining their connection through an innate curiosity and simmering frustration. It would be easy to play the role as two parts; instead, Scott works to make the audience see Mark as one person. (Lower, who we mainly see as Helly’s innie, is also superb, and Arquette tears into her duplicitous manager with a masochistic conviction.)

Whether you invest in the allegory, character arcs, or both, “Severance” hits its marks. Compulsive on an episode-to-episode basis and unshakeable in between sittings, there are so many ideas swirling, so many pieces moving, it would be easy to overlook the immense lift needed to give the show its clarity. Erickson and his writing staff deserve a ton of credit. The season plays out cleanly and efficiently; episodes range from nearly 60 minutes to a crisp 40; cliffhangers abound, but they’re earned. (Season 2 needs to be greenlit, shot, and delivered to me immediately.) This is serialized storytelling that knows how to make the most of its episodic format.

If hell is the nadir of human imagination, “Severance” is easily one of its highs.