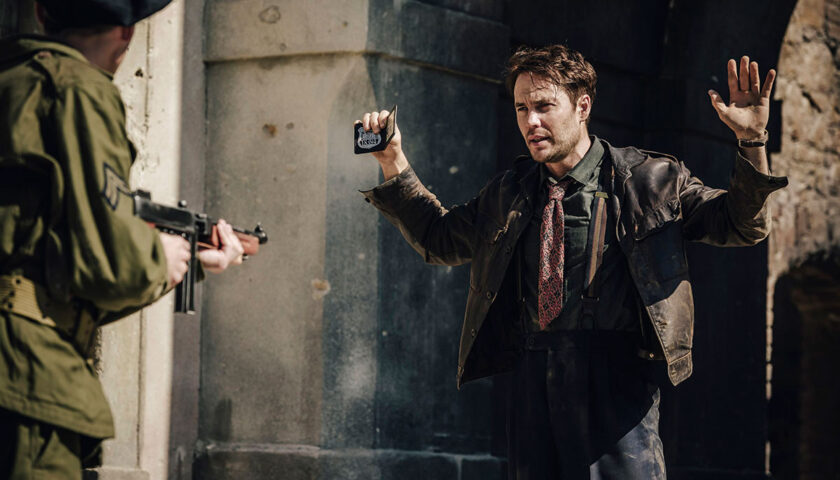 Played by Taylor Kitsch (“True Detective”), Max, a NYPD cop in war-torn 1946 Berlin, looks straight at the camera early in “Shadowplay,” and pours out his soul.

Period dramas rarely break the fourth wall, but for Mans Marlind, the creator-writer-director of Tandem’s “Shadowlands,” “we don’t have to be traditional. Especially with period, you need to be even more modern, to avoid the stiffness of costume drama,” he says.

“Television’s development [is] creating audiences that are smarter, meaning we can be more and more daring, which is what audiences are looking for,” says “Shadowplay” co-director Bjorn Stein. The show has been shooting since April 29 in and around Prague.

“We’re always looking for something different. I pride myself on taking risks,” he told Variety.

“Shadowplay” is set on a large-scale canvas, the bombed-out Berlin of 1946, one year after World War II, as the war’s former Allies, the U.S and Russia, jockey for power in the wrecked city, and its survivors try to rebuild their lives.

“Knowing the market is very key to whatever you’re doing. But it’s also about taking chances and doing something that people haven’t seen before. That’s kind of in our DNA,” says Tandem’s Rola Bauer, citing Tandem’s 2010 hit “The Pillars of the Earth.”

“Shadowplay” also responds to what Bauer calls her essential two E’s and two S’s: “Make programming that’s enlightened and entertaining, and build a safe environment to support your creator’s vision.”

That’s a shared concept. “Film and television is such as malleable experience. It’s collective choices you make along the way that make the magic,” says David Davoli, exec VP of international television at Bron Studios, a series backer. “In creative terms, embracing Mans’ vision has been the No. 1 collective choice. Audiences want to feel a series is telling them something about themselves, their own human condition.”

“Shadowplay” certainly looks set to deliver on that score. Max is in Berlin to save the brother who once saved him but seems to have lost it, killing unrepentant Nazis in ghastly ways. He embarks on what Tandem’s Tim Halkin calls a “very complex, multilayered journey.”

Another character, Elsie (Nina Hoss) a former university linguistics teacher who’s joined the police force, has created a vegetable garden at her home, growing her own food, symbolizes the hope of rebuilding Berlin, says Halkin.

The Berlin of 1946 had “absolutely no structure, no law, nothing, it’s a question of survival,” says “Shadowplay” producer Rick McCallum, at Film United.

For Marlind, the series “pushes the essence of what humanity is all about, to find peace where there is still war, to find trust where there is no honor. To love the present because it is stronger than the past.”

In other ways, “Shadowplay” is also Tandem to a T, a historical event series.

“We’re a company that takes high-concept historical or myth ideas and looks for their contemporary resonance,” says Bauer.

Tandem’s series are also crafted like films, using grand-scale physical sets. “Too many big international productions have [to rely on] CGI to attempt to give scope and grandness,” Bauer said at MipTV.

“I was on the set a couple of weeks ago,” says Studiocanal CEO Didier Lupfer, “and Rola and Tim have found places that are amazing. The setting will look totally authentic, Berlin, utterly destroyed, just after WWII, even if the sites are in fact outside Prague.”

Tandem’s reputation for TV epics is built on such projects as 2004’s “Ring of the Nibelungs,” a two-part miniseries complete with dragons and battle scenes that cost a reported $25 million, still way above most miniseries’ budgets 15 years later. On “World Without End,” Tandem built a whole 14th century English village in fields outside Budapest, including a collapsible hydraulic bridge.

On “Shadowplay,” Berlin exteriors will be shot with drones on a 366,000-sq.-ft. site around a semi-ruined Soviet-era sugar factory. Its facades have cavities; stripped of stucco, walls expose brickwork below; rubble has been piled against walls; real grimy dust blows down the streets.

“They’re boots on the ground, on set when they need to be, know how production works,” Miller adds.

They also sign innovative deals. Produced by Studiocanal’s Tandem Productions and Canada’s Bron Studios, “Shadowplay” is text-book Bauer. The first broadcaster she brought in, as a co-producer, was Germany’s ZDF.

“Some shows are local, but resonant globally; some shows are global from the get-go, like ‘Shadowplay,’ but have to be landed locally. ZDF is renowned for prestige historical drama, so [they were] key to have on board,” she says.

An additional eight episodes are planned for a 2020 shoot.