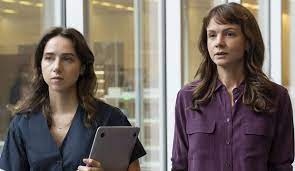 If, like me, you consider “All the President’s Men” to be one of the most exciting movies ever made, it’s remarkable to consider that it came out in 1976, just four years after the Watergate break-in. The saga of Richard Nixon’s corruption and downfall had saturated the culture, yet every moment in “All the President’s Men” tingled with discovery. That’s why it’s a film you can watch again and again. When a big-screen journalistic drama gets built around a news story that epic, it needs to give you a version of that feeling. “Spotlight,” the Oscar-winning 2015 drama about The Boston Globe’s unraveling of the child sex abuse scandals within the Catholic Church, wasn’t as great as “All the President’s Men,” yet it, too, was laced with a sense of discovery. It’s there in how the film anatomized not just the horrific behavior of abusive priests but the omertà of the Church.

Given that, the bar is high for “She Said,” a bombshell drama about The New York Times’s uncovering of the Harvey Weinstein scandal in 2017. Like Watergate, the revelation of Weinstein’s crimes — not just one movie mogul’s monstrousness but the whole system of secrecy and denial that dominated the arena of sexual harassment and abuse in and outside Hollywood — was a story that shocked and changed the world. The reverberations of it are still being absorbed; Weinstein himself, now serving a 23-year prison sentence, hasn’t even finished being on trial. So you may wonder how, exactly, “She Said” is going to capture what that story felt like before it became a story.

The movie, written by Rebecca Lenkiewicz and directed by Maria Schrader (it’s based on the book of the same title by Times reporters Jodie Kantor and Megan Twohey), accomplishes this by tapping into something that was always an essential part the Weinstein saga, but one I’ve never experienced as vividly as I did watching “She Said”: the pervasive, unfathomable fear that ruled Harvey Weinstein’s victims.

The movie opens in 2016, when Twohey (Carey Mulligan), a Times investigative reporter, is getting several women to go on the record accusing Donald Trump (then a presidential candidate) of sexual abuse. The fear is already pervasive. Trump, who phones Twohey to deny the accusations, is fulminating in his rage, and after the story is published one of the accusers gets sent a bag of excrement in the mail.

It’s no big leap from Trump to Weinstein. When Kantor (Zoe Kazan) starts to get tips about Weinstein’s harassing behavior (and worse), she speaks on the phone to Rose McGowan, the first Weinstein accuser to go public, and even the furious McGowan is skittish about signing on to participate in the story. She explains that she’s been burned before — by the Times, and by other outlets who pursued a Weinstein exposé only to drop it.

Twohey and Kantor start working together, and what they discover, speaking to former employees of Miramax, is that the woman there have been systematically traumatized — first by Harvey, with his litany of harassing rituals (the forced massages and jacuzzi baths, the disrobing and masturbating, and, in certain cases, the act of rape), and also by what happens afterwards. If they speak up, they‘ll be blackballed from the entertainment industry; Harvey has the power to do that with a phone call. And many have been pressured into signing nondisclosure agreements, which means that they’ll be sued if they talk. The culture of NDAs becomes part of the system of oppression, a way to buy silence by demanding that these women sign away their voices.

Beyond that, the sense of entitlement that Weinstein brings to sexual abuse suggests that he’s a man who lives outside the law, and that he’ll therefore stop at nothing. In “She Said,” we never see Weinstein’s face, but we hear him — on the phone, and in the chilling actual recording made by Ambra Battilana Gutierrez of her encounter with Harvey and his coercive tactics in the hallway of the Peninsula Hotel. And we see him from the back, a man who carries himself like an ogre. Fear, and the fight against it, is a key theme of “She Said.” The film places that fear — of assault, of joblessness, of shame, of desolation, of dark cars following you in the night — at the epicenter of the culture of abuse.

Following the template of “All the President’s Men” and “Spotlight,” “She Said” is a tense, fraught, and absorbing movie, one that sticks intriguingly close to the nuts and bolts of what reporters do. When Twohey and Kantor start showing up, often unannounced, at the homes of former Miramax assistants, the look of grim dread on the faces of those women says more than their words. We see the reporters at home, juggling work and husbands and kids, and we feel their deep solidarity with the women they’re trying to coax into talking. Their reporting connects former assistants, movie stars (McGowan, Gwyneth Paltrow, and Ashley Judd, playing herself), as well as the financial executives who oversaw the payouts to silence Harvey’s victims. We see the journalistic juggling they have to do to build a sense of collective power in these women where there’s been none. (There’s also the added pressure when they learn that Ronan Farrow is working on the same story at The New Yorker.) Strand by strand, Twohey and Kantor weave the tale of a sinister corporate web with Harvey the toxic spider at its center.

In the brightly lit offices of the Times, the editors add a spice of dramatic tension — Patricia Clarkson, terse and worldly as Rebecca Corbett, who will never tip her hand as to just how badly she wants this story (though we read it in the dance of Clarkson’s eyes), and Andre Braugher as Dean Baquet, a born negotiator who knows how to handle a terrorist like Weinstein. Mulligan, now wily and now explosive, and Kazan, who beneath Kantor’s Poindexter façade creates a stunning X-ray of the journalistic mind whirring away, are a dynamic and, at moments, moving team of ace reporter operatives.

Yet for everything that works about it, “She Said,” after its superb first hour, doesn’t built to an electrifying payoff in quite the way you want it to. It’s not so much that we know what’s coming as that the story stops gathering a sense of intricacy. Can Twohey and Kantor get one or more of Harvey’s abuse survivors to go on the record? Without that, they have no story. Yet somehow, in the course of waiting for that breakthrough moment, the film starts to feel more targeted, less epic than what the Weinstein saga became: a prophecy of how the world had to change. “She Said” remains compelling, but by the end the deliverance you feel is more redux than revelation.