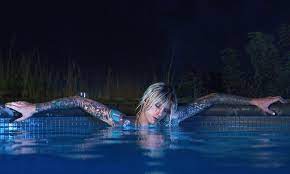 The idea of a Music Icon thrashing around and getting drunk and coked up endlessly should not be any big news or any groundbreaking sort of plot. But oddly enough, some studio execs thought that it was a big deal that Coleson (aka Machine Gun Kelly) was the lead was willing to be the messed-up character, that they had to put some unfortunate money behind it.

The result, as expected, is to make him out to be a total relentless asshole to everyone in his eyesight, especially the sweet and patient Assistant played by Maddie, who deserves as much credit as she can get for her acting chops in realistically portraying someone in the position of having to deal with the ridiculous antics of the spoiled “genius” she has to babysit.

The most hilarious scene which gives a realistic example of the so-called musical genius turning into a foul-mouthed child, throwing a tantrum in a TV interview studio, where the techs and the makeup people all scatter while Cole (his real name is the same as the character) yells and cusses out everything the poor girl does, for no reason–and then she quits, only to be combing his ridiculous ratty hair in the next shot.

The entire film is set up to somehow make us sympathize with the Cole character, only to leave us utterly cold as he is utterly devoid of any sort of sympathy for anyone, including his little 4-year old daughter. God only knows how that kid could ever mistake this man-child for a father.

This movie is pointless and is really only required viewing for that cross section of the audience that admires this kind of spoiled, egotistic, and vapid mentality.