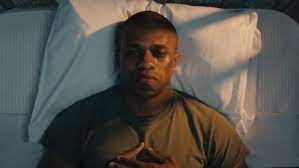 The Inspection feels like a deeply personal film from Elegance Bratton. This causes it to also feel unrelatable for many, despite being beautifully shot.

The Inspection is based on a true story, which is likely its ultimate downfall. It follows a young gay man who decides to join the Marines instead of living on the streets. You see, his mother kicked him out of the house at 16 for being who he is. His decision to better himself is inspiring, but heartbreaking when he admits that he knows he is going to die and would rather die in uniform than as just another homeless man in the streets.

The majority of the film takes place at boot camp, where he is beaten down by the drill sergeants and other recruits. He is teased and treated even more poorly than the others because of who he loves, which is absolutely devastating to see. However, this going on for nearly ninety minutes becomes redundant. Those who enjoy watching pain on screen might be able to stay invested the whole way through, but the story almost gets sadistic at times.

Probably the biggest issue with this film is the stigma that it feeds into. While it is very clear this is personal story from the writer and director, and that it was important for him to tell it as he lived it, having French almost immediately start fantasizing about his fellow recruits and superiors because he is gay just feels wrong.

It almost comes off as confirming that yes, gay men should be in the military because they will instantly want to have sex with the straight men and it will make them uncomfortable. Some viewers will likely check out here, but hopefully they can get past this bizarre choice and stay with the movie for the ending — because that is empowering and inspirational.

The cinematography is powerful, and honestly quite stunning at times. The Inspection is beautifully shot in a way that does its best to help the viewers to relate to the main character — even if they have nothing in common. Unfortunately, it all too often feels like you are on the outside looking in, which hurts when trying to let the viewers experience what French does.

That said, Jeremy Pope does a phenomenal job in the role, leaving everything on the table. He makes French easy to root for, and extremely likeable. Gabrielle Union is also well cast as his mother. Her performance is a heartbreaking one, as you cannot help but feel sorry for her — even if she doesn’t deserve it.

While parts of this movie could be a struggle, especially for those that hate seeing someone go through unnecessary abuse, there are several moments that are extremely touching. The final few scenes of the film show how far French came, even though he was put through Hell to get there. The words he speaks to his mother are enough to make anyone want to cheer for him, but also give him a big hug.

The Inspection is empowering and inspiring at times, but it also drags on a bit too long for a ninety minute movie. It also feeds stigmas that are best left alone.