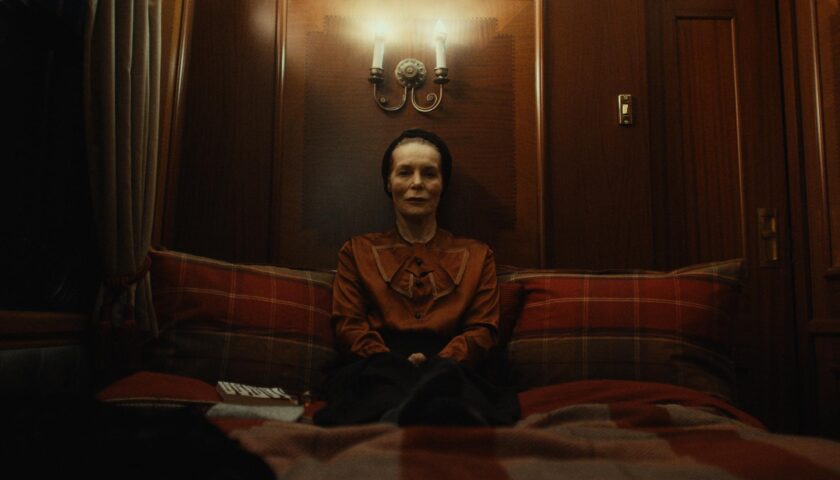 Wounds, both physical and psychological, become scars with time. But whether those scars are to be hidden or worn as badges of honor — evidence less of past trauma than of subsequent strength and healing — becomes the surprisingly resonant dilemma at the heart of Charlotte Colbert’s witty, weird horror-drama debut, which scooped the First Feature award in Locarno. “She Will” may not be particularly terrifying, except perhaps to abusers, rapists and anyone who’s ever used the phrase “it was a different time” to excuse the sins of their past without reckoning with them, but as a superbly crafted, thematically rich fable, it administers a potent dose of #MeToo vengeance, all while wearing its nasty sense of humor like a red-lipstick grin applied to a perfectly masklike face.

It helps that the face here is that of Veronica Ghent, an aging movie star played by an outstanding Alice Krige, she of the highest, sharpest cheekbones and the darkest, glitteriest eyes. Krige’s Ghent starts off as a snappish, brittle Norma Desmond type, who has recently undergone a double mastectomy and is being tended to through her convalescence by young, bleach-haired, boots-and-bomber-jacket nurse Desi (an excellent Kota Eberhardt). At first our sympathies are all with down-to-earth Desi, as she patiently suppresses her eyerolls in response to the older woman’s querulous, imperious iciness. “I’ve had a mastectomy, not a lobotomy,” Veronica barks as Desi gently tries to get her to follow medical advice. “All I need from you are bandages and the occasional bath.”

Veronica, who become famous at 13 when she starred in a film from celebrated auteur Eric Hathbourne (a perfectly cast Malcolm McDowell), has booked into a remote Scottish retreat to recuperate. But when the pair arrive there they discover that while they get a “rustic” little cottage some distance through the forest from the main house for themselves, they are not the only guests. Leading the motley crew of self-improving residents is Tirador (Rupert Everett, sporting wild hair and pearl earrings), a new-agey guru who mounts yoga classes and therapeutic drawing sessions using charcoal picked from the forest floor.

The charcoal, he claims, is peculiarly creatively fertile due to its high concentration of human cremains: The retreat is on the site of a historic, or more likely folkloric, witch-burning some centuries ago, ghostly memories of which start to invade Veronica’s dreams. But instead of being terrorized by these flashing images of young women in iron restraints being brought to makeshift pyres, Veronica draws some unearthly strength from them. Certainly her post-op pains lessen. Her relationship with Desi thaws and then warms. Soon, the deep melancholy that lies behind her shellacked facade starts to reveal itself.

Part of that sadness is paranoia about the aging process generally, and part is about her breast removal surgery as, she imagines, symbolic of a loss of femininity — these are deeply believable fears, especially for an actress formerly celebrated for her beauty and nubile youthfulness. “Androgyny,” she sighs bitterly, comparing her own reflection to the carelessly gorgeous Desi’s “so attractive in the young and so repugnant in the old.” Meanwhile, a nationwide search is on to find a new teenager to play her role in the remake of the film that made her name — a film to be directed, of course, by Hathbourne himself. Female ingenues flare, wither and are replaced; their abusive, exploitative male svengalis simply accrue more admiration, respect and power as they age.

Colbert and co-writer Kitty Percy work a lot — arguably a little too much — into their screenplay, and as a result occasionally a stray line of dialogue can feel a little clunky. The exact nature of the ancient Scottish witch-burning that gives the place its supernatural power is never clearly outlined, so gives license for a lot of different Gothic manifestations: hauntings; dream-teleportation; rains of ash; oozing, murderous mud. But even its least convincing, most contrived turns, such as the fraught situation that the otherwise stoutly smart Desi gets into with a local (Jack Greenlees) who is clearly a mansplaining wrong ‘un from the moment he tells her she’s pretty “when she smiles,” are carried by the performances and the terrifically assured craft.

Jamie D. Ramsay’s photography is glowering, damp and sinister, with rich crimson accents, and if there’s a slight overuse of drone shots that drift eerily over the darkened landscapes (an element that feels on the verge of becoming an “elevated horror” cliché), really these pauses give a moment for Clint Mansell’s appropriately deranged score to take the lead. The music, in turn, blends seamlessly into an uncannily precise soundscape in which tiny noises, like the beating of birds’ wings or the oily slicking of mascara onto eyelashes or a night breeze full of whispers, are amplified. And the whole is assembled into a heady but economical 95 minutes by editor Yorgos Mavropsaridis, who as frequent collaborator of Yorgos Lanthimos knows a thing or two about cutting along an atmospheric, dissociative bias rather than one of traditional storytelling logic.

These days, the term “witch-hunt” is frequently invoked by aggrieved men complaining about so-called “cancel culture” and/or protesting their innocence of sexist offences, so “She Will” can be seen as slyly reclaiming the terminology and the mythology of witchcraft for the traumatized female survivors of male predation. But what is maybe most special — and most deliciously troubling to the bad men who thrive in an environment of competition and intergenerational incomprehension between women — is the deeply satisfying and moving portrait of female solidarity it paints. Veronica gains peace of mind not just through her mystical connection to the avenging viragos of yore, but through her burgeoning bond with Desi, and it suggests that as long as different generations of women simply get different manifestations of the same misogynist bullshit, the antidote to that toxin can, perhaps, be found in each other.