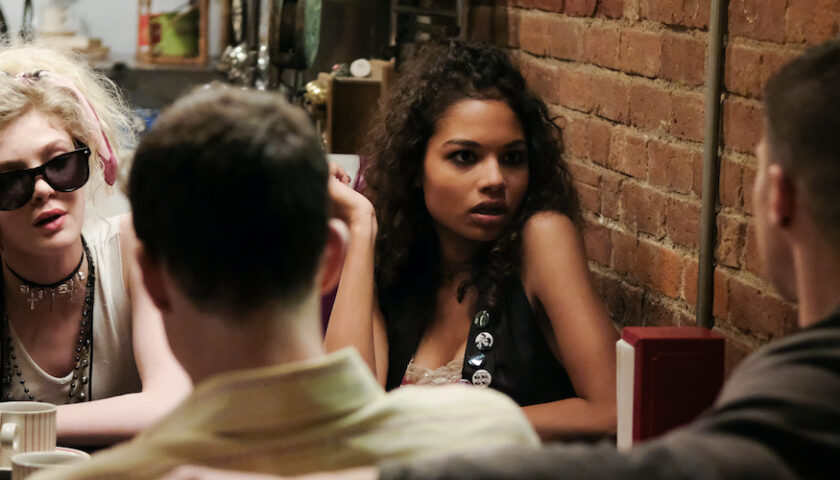 It’s possible that if you lived or went through some sort of ‘80s music phase at the right age, you might have some fun spotting the dozens of references throughout Stephen Kijak’s cinematic tribute to The Smiths, “Shoplifters of the World.” Or, it’s possible you’ll roll your eyes at popular lyrics woven into the dialogue and the nonstop parade of references throughout. I fell in the latter camp, grimacing while characters use “sixteen, clumsy and shy” and “that joke isn’t funny anymore” not as Smith song lyrics but casually in conversation, as if teenagers routinely broke out in verse, philosophizing existentially before doing something ridiculous. When coupled with the cast’s mismatched acting and Kijak’s dubious screenplay, there’s little left to enjoy.

In “Shoplifters of the World,” a group of friends in Denver band together out of love for their favorite group, The Smiths. Already, their lives are starting to change—one friend is going into the military because his parents told him to, a couple in the group starts to sense breakup tension in their relationship, another is stuck at the same job she had when they first all met. But an ominous shadow then clouds their party plans when Cleo (Helena Howard) learns The Smiths broke up. Word spreads through the circle, but the group continues towards their original plans. However, Dean (Ellar Coltrane), the lovestruck sad boy who lets Cleo shoplift from the record store where he works, wants to pay homage to their favorite band and impress Cleo. So, he takes the store’s gun, drives down to the local rock station, and forces the macho metalhead deejay (Joe Manganiello) to play all of The Smiths’ albums at gunpoint.

The unfortunate timing of releasing this movie the week Denver’s neighboring city of Boulder suffered a mass shooting aside, the movie just never finds its groove. Here is a group of characters so obsessed with a band that they trade song lyrics like gossip, but they don’t feel like characters outside of their preoccupation with The Smiths. Even their hang ups around gender norms, sexuality, and celibacy are references to the band. There’s even a conversation between Dean and the deejay Full Metal Mickey about the Smith’s message of vegetarianism and Cleo’s car lets everyone know that “meat is murder.” The movie lets no part of The Smiths’ ideology be left unmentioned. That barrage of references can feel like overkill when Sheila (Elena Kampouris), of “Sheila Take a Bow” fame, dramatically writes out “There is a better world,” a line from the song “Asleep,” on a mirror in lipstick in an emotional moment of rejection.

Speaking of the movie’s references, they extend beyond the scope of The Smiths and onto their contemporaries. After all, what kind of post-punk rock fan would you be if you didn’t sneer at more popular groups like Bon Jovi for selling out and writing shallow songs about parties? Among the many visual and verbal name drops are Twisted Sister, Alice Cooper, and Kiss in the rock station. During the groups’ party stops, they run into someone dressed as Siouxsie Sioux at a house party and a bouncer dressed as Grace Jones at a gay bar. Sheila, who dresses like Madonna, has a “Suddenly Seeking Susan” moment in a bathroom, using an air dryer to dry off. It’s as if “Shoplifters of the World” is trying to test the limits of how many references can a movie hold.

With a story by Lorianne Hall, Kijak so clearly wants to share his love of The Smiths with the world, but it overpowers just about everything else in the movie. Cleo and her crew continue partying even as she hears Dean has taken over the local rock station by force, only showing up once she learns other people are flocking to the station. Howard and Coltrane’s listless line delivery doesn’t shore up much emotional stakes in the story. In fact, most of the supporting cast’s performances are pretty flat, except for Manganiello, who brings a surprising amount of empathy to the story as his hostage deejay character. Where the kids are cold and hard to connect with, he goes through the shock of being held at gunpoint and mocking The Smiths, to opening up to Dean and eventually appreciating their music. He goes through an emotional arc like no one else does in the movie. Eventually, Manganiello and Coltrane get a rapport going that feels separated from the rest of “Shoplifters of the World,” which only adds to the film’s discord.

Much of Kijak’s career has been dedicated to making documentaries about music and musicians, like “Sid & Judy,” “Stones in Exile” and “We Are X.” He’s covered the gamut of popular music from Backstreet Boys to Lynyrd Skynyrd. In a way, “Shoplifters of the World” is very much a career-spanning tribute, including clips of The Smiths in their heyday and occasional quotes from Morrissey from old interviews, and obviously, an astounding number of songs for a band who only released four studio albums. It’s unfortunate that the finished tribute doesn’t quite come together, and the tension between needing a compelling narrative and paying respects to bands whose music changes our lives never gets resolved. How bittersweet for a movie about The Smiths to break up over irreconcilable differences.