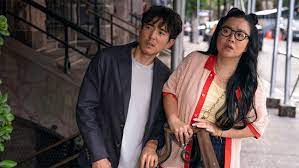 Shortcomings, which premiered Sunday at the Sundance Film Festival, calls out some of the negative qualities romantic-comedies often celebrate in their protagonists. Randall Park directs the refreshing take which suffers no fools.

Ben (Justin H. Min) and Miko (Ally Maki) are a couple in Berkeley, Calif. When Miko leaves for an internship in New York, Ben has a chance to see if other women will put up with him any more readily.

Like many romantic leads, Ben has strong opinions about why he’s not where he wants to be in life and harsh judgments about others. Shortcomings does not pretend Ben is insightful and misunderstood.

Ben keeps telling people he’s just joking when he’s really just being mean. Shortcomings shows how hurtful sarcasm can be, and doesn’t let Ben off the hook for what may have sounded like witty lines in his head. He also just interrupts people.

This isn’t a new trope, either. Ethan Hawke’s character in Reality Bites traded in ’90s slacker sarcasm, and Harry in When Harry Met Sally… was a know it all, so there’s a long cinematic history of characters like Ben who nevertheless get the girl.

Ben is attracted to white women which upsets Miko when they are together. Ben’s gay friend Alice (Sherry Cola) observes it too, and when he’s single again, Ben pursues two different white women.

With these two encounters, Shortcomings shows the difference between a lust that’s uncomfortably awkward and a natural connection that’s just endearingly awkward as two interested parties figure out the new dynamic. Ben still gets in his own way with the latter, too.

The first cynical observation Shortcomings presents is when Ben attends a screening of an Asian rom-com. Ben resents the pressure to be happy for representation when it’s still asking Asian talent and audiences to settle for white tropes.

At first, it seems like maybe Park has a beef with Crazy Rich Asians, or his own hit Netflix rom-com Always Be My Maybe. But, given the film soon reveals Ben as unsympathetic, perhaps he’s meant to be an example of the cynics who can’t even enjoy a good thing.

Adrian Tomine adapts his own graphic novel. Park keeps the pace moving. The film consists mostly of dialogue scenes and Park gives those scenes rhythm.For fans of the traditional romantic-comedy, Shortcomings may be jarring but that’s what makes it good. The history of superficial rom-coms deepens Shortcomings, and the next formulaic rom-com might even be richer after Shortcomings pointed out why it’s unrealistic.