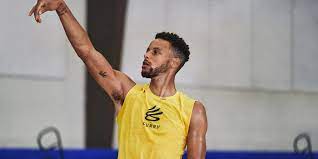 Of all the major American sports, basketball is the one where personality shines through the easiest. There’s no helmet, no facemask. Any one player only has to share the court with nine others. The athleticism, the fire, and the smiles all come through. So one of the biggest challenges for any documentary filmmaker trying to make a biography of a professional basketball player is to contend with what’s already freely given.

In the world of the NBA, Stephen Curry isn’t one of the largest personalities, but he’s not a blank slate either. Watch clips from any of his Golden State Warriors’ title runs or his legendary game-winners, and you’ll see a man who isn’t afraid to show emotion when the lights are brightest. He’s lived a life around sports, having come from a family of athletes, including a father and brother who are fellow NBA vets. As the opening minutes of “Stephen Curry: Underrated” show, he now has career records to go with a handful of championship rings. The biggest question for this feature-length Apple and A24 doc isn’t if all of that exists, but why. To find an answer, director Peter Nicks is tasked with going back to Curry’s time as a college undergrad.

Though the film sometimes feels like multiple Steph Curry docs merged into one, the thread that becomes the most significant begins with a flashback to the mid-2000s, tracking Curry’s recruitment to Davidson College. Over the course of his three years playing and studying there, he went from undervalued point guard to a topic of national conversation. Naturally, that attention came as a result of his on-court heroics. But the most illuminating parts of “Underrated” from that time are the tiny glimpses in between the games. It’s a more carefree, freewheeling Curry in that footage. (One particular clip from a campus sketch show will be a treat to anyone whose first few years of college featured an inexplicable amount of Asher Roth.) There are grainy digital camera shots of study rooms and hotel hallways, evoking his time there. Those become the thin backdrop for a remembrance of Curry’s Davidson teams and the NCAA tournament appearances that made the small North Carolina liberal arts college a coast-to-coast sensation for a few weeks in 2008.

Those glimpses are fun, and “Underrated” is steadily entertaining throughout. At the same time, it’s hard to escape the feeling that this film is struggling to make a compelling case for its own existence. Aside from some sparse input from Curry’s teammates and coaches (including the sage Bob McKillop, for whom the Davidson court is now named), there’s not much in those Wildcat runs that wouldn’t pop up in a well-produced, in-house NCAA special. (You hear far more from Jim Nantz, Gus Johnson, and Sean McDonough’s in-game calls than you do from Steph himself.) There’s a healthy dose of from-the-stands camcorder footage of games throughout Curry’s college tenure. But fun as that perspective is, the story of Curry’s career has already been written.

As far as what makes Curry the player he is, “Underrated” nods toward parents Dell and Sonya reworking his shot back in high school. Aside from the other technical elements of his current-day prep (seen all too sparingly in workout sequences), the rest of what “Underrated” offers as the secrets to Curry’s success are more in the realm of self-psychology. The motivating factors for any point in Curry’s career — to achieve greatness, support teammates, and represent his roots — are the kind of one-size-fits-all sentiments that you could graft onto pretty much every pro athlete’s origin story. Save for a few peppered comments about wanting to prove wrong the people who underestimated him for his size, “Underrated” is a spiritual sibling to last year’s ESPN Derek Jeter documentary series “The Captain.” Both are tasked with wringing drama out of someone who’s lived a uniquely charmed sports existence.

The closest that Nicks gets to breaking that mold is putting forth Curry as a well-adjusted superstar, one who, despite living in a Bay Area house with a private gym, a bevy of Apple products, and a tastefully upscale interior, takes a workmanlike approach to his performance. On drives to the Chase Center for Warriors games with a camera in the passenger seat, he’s already locked into a silent focus. He approaches his strength-training regimen like a run to the grocery store. Even when his commercial shoot is crashed by a famous fan, he juggles all of those elements as someone who knows that they’re all part of the job. If there’s a heavy dose of added pressure that Curry still carries after his many exploits on the national stage, he doesn’t show it while there are cameras in the room.

So searching for something to latch onto, “Underrated” includes Curry’s delayed pursuit of a Davidson degree, after leaving college early for the NBA Draft left him a few credits short. It’s another example of Curry’s life being more compelling in theory than in practice, as Zoom meetings with a professor and Google Doc thesis outlines flit in and out of the film. (Any actual discussion of his chosen topic of women’s sports is limited to a few over-the-shoulder glances of him typing out parts of a rough draft.) Seeing him finish up his school obligations as he and his college teammates talk about their time in the spotlight a decade and a half ago makes for a cute bit of symmetry, but it’s never more than just another ingredient in the soup.

For all its familiarity and the lack of surprise that Curry himself is bringing, “Underrated” is still the product of an observant storyteller. When the film gets the breathing room to be spontaneous, particularly in its peeks into the day-to-day practice schedule of an otherworldly three-point shooter, there’s an excitement and a discovery there. That spirit spills over into the contributions of editor JD Marlow, who works together some smile-inducing transitions between past and present. The match cuts between swishes a decade apart or Curry side-stepping defenders for step-back 3s show a greater sense of diligence and playfulness than you usually find in straightforward hagiographies.

Maybe it’s because this film’s perception of Curry is of a player too talented and fueled by the joy of the long-range shot to be petty or spiteful. Maybe it’s his later success that keeps his Davidson stint from feeling like the open wound it clearly still is for at least one of his teammates. Whatever the reason, “Underrated” ends up feeling like something better suited for a different medium. The speed run through the end of Curry’s 2021-22 season with the Warriors, in particular, feels like a missed opportunity, a lack of runway, or a film butting up against its own self-appointed purpose. Closer to a magazine piece than a doc — it’s probably not a coincidence this will arrive somewhere near the 15th anniversary of that ’08 Davidson team’s Cinderella tournament run — it also has the feeling of a write-around profile that managed to get some time with its main subject after all. Curry has had a fascinating past two decades, something that “Underrated” does an effective job of capturing. But in harnessing what was always there in full view, there’s not much else here to add.