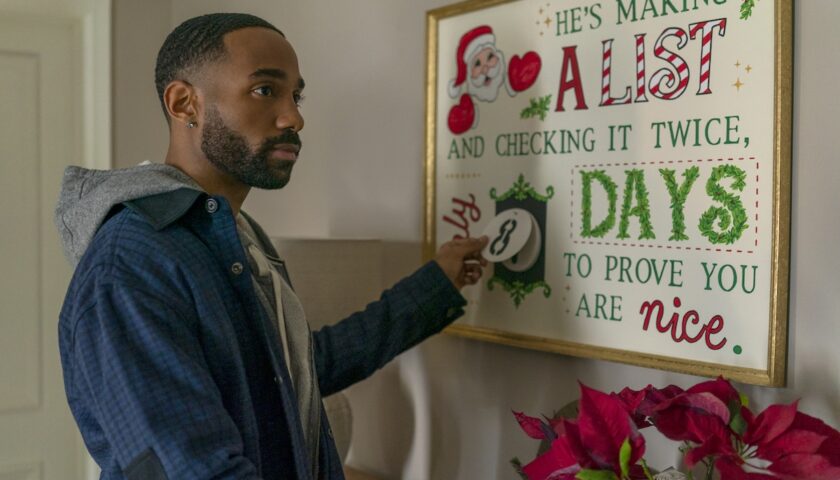 ​​The Hallmark Christmas movie cottage industry is a wonderland fantasia defying all manner of reason. As my colleague Katie Dowd argued last year, imagine it’s the Marvel Cinematic Universe — except replace Thanos and Spider-Man with the confounding notions that, say, fictional cities and nations exist all over the world with the sole purpose to bring good tidings and cheer, or that a rookie journalist can travel halfway across the world on assignment and find love there.

My boyfriend and I have spent many of our holiday seasons streamlining these flicks into our brains, as if they were the self-soothing equivalent of a Christmastime white noise machine. But there’s always been something missing in the picturesque, exceedingly white Christmases that Hallmark has pumped out for decades.

One of the latest — and perhaps arguably most pleasurable — entries to this universe is Netflix’s “Single All The Way,” a film that not only circumvents the compulsory heterosexuality of nearly every Hallmark movie that came before it, but also avoids a still-too-common pitfall of so many mainstream LGBT movies.

The film is directed by Michael Mayer, who brought “Spring Awakening” to life on Broadway. It follows the familiar contours of a Hallmark flick: Peter, a social media manager played by Michael Urie, is heartsick after years of coming home for the holidays single. That pattern continues as he and best friend Nick (the charming Philemon Chambers) finds out Peter’s latest beau — who was supposed to come home with him — lives a double life, is married to a woman and has a family. (A rather dark plot point for a Hallmark-y holiday movie.)

So to appease his accepting (more on that later) family, he brings a reluctant Nick home to Bridgewater, New Hampshire — a real place rather than a fake European country that exists only on Netflix — under the conceit that they’re actually dating. All the routine Hallmark Christmas film hijinks ensue, including a Christmas pageant, Jennifer Coolidge belting out Whitney Houston’s rendition of “Joy to the World” within the first half-hour, quirky day jobs and a town whose economy relies almost exclusively on holiday cheer.

To be clear, “Single all the Way” is not great, or even good, based on the metrics with which most people would evaluate a film. The pacing is off, reserving the majority of the will-they-won’t-they turmoil to the third act. Plot holes abound. The majority of the cast, bar the leads, really are phoning it in.

But here’s the thing. The movie still works, if you ignore that and take it for what it is: a slightly higher-budget Hallmark movie, with all the fantastic logic that these movies entail.

In “Single All the Way,” the underlying tension is not with Peter coming out to his small-town family under duress, or having a furtive romance that only gets blown wide open at the film’s climax. So many acclaimed, mainstream gay narratives from “Love, Simon” to “Boy Erased,” with only a few notable exceptions, rely on the familiar, traumatizing logic of being stuck inside the proverbial closet without an escape plan.

While stories like these are essential, especially during the holidays when so many LGBT people are forced to spend their holidays alone or hiding themselves entirely, it’s just plain nice to transpose the dream logic of the Hallmark universe to movies about LGBT people. (Compare that to last year’s prestige gay holiday romcom, the Kristen Stewart-starring “Happiest Season.” Sure, it was well-received by critics but it relied on a protagonist staying closeted throughout — and ultimately left plenty of viewers disheartened while watching what should have been comfort food cinema.)

Really, for better or worse, “Single All the Way” just plays out like a bog-standard rom-com love triangle. Peter’s mother Carole, as in “Christmas Carole” (Kathy Najimy), sets him up with a dreamy new ski and spin class instructor in town, played by bona fide Hallmark leading man Luke MacFarlane (star of such films as “Sense, Sensibility and Snowmen,” “Chateau Christmas” and “The Mistletoe Promise”). The rest of the family, meanwhile, insists that Peter and best friend Nick should be together instead, even as they ditch the idea of being a fake couple entirely.

Even when they’re not bringing their A-game, the acting is still miles ahead of most other Hallmark films, including and especially the legendary Coolidge. Her melodramatic Aunt Sandy, in charge of directing the Christmas pageant, is a welcome dose of camp. She even does a bit of fan service, at one point, literally telling Peter that “the gays … are always obsessed with me.“I don’t know why, but I like it,” she quips.

Much of the dialogue in “Single All the Way” is gay culture 101, but for a general audience, that will suffice. There’s references to “plant gays,” a line from the camp classic beloved by many, many gays, the evergreen dynamic of well-meaning straight people trying to understand gay culture. It’s worth the price of admission just to hear Kathy Najimy’s character explain the myriad “common misconceptions we straight people have about gay people.”

And perhaps, most astoundingly, the flick is one of the first rom-coms I’ve seen in a while — Hallmark holiday or not — where the concept of “will the couple you’re rooting for get together or not” actually feels believable. It helps that so often in queer culture the idea of “found family,” the community you’ve forged after losing the family you grew up with due to isolation, has become a thing to celebrate. So when you’ve found a person who feels like home, it’s hard to give that new family up — even if it means losing a potential life partner.

This idea looms large throughout the film, but thankfully never makes the film overwhelmingly bleak (this is a Hallmark movie after all). And by the time you get to the closing scene, set of course on Christmas Day, a tidy resolution feels all the more hard-won.