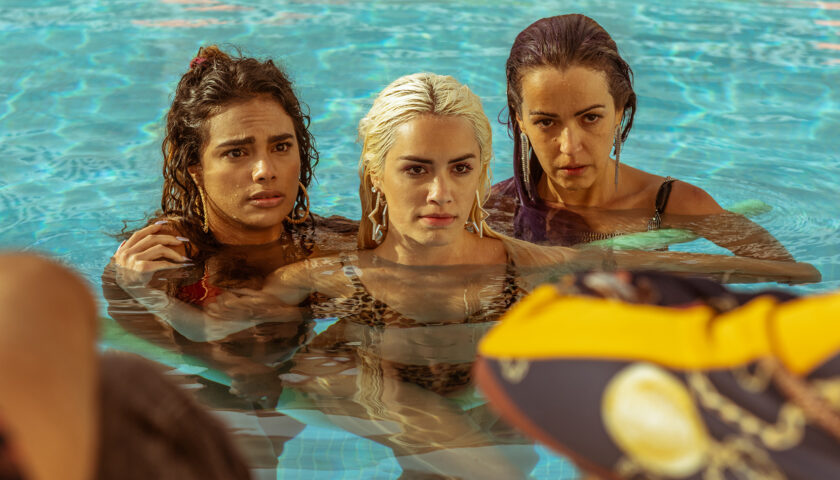 Sky Rojo creators Álex Pina and Esther Martínez Lobato describe their new series as “Latin pulp”, a summary it’s hard to argue with. The two Spaniards are responsible for Emmy-winning bank thriller Money Heist, the most watched non-English language series on Netflix. Tense and sophisticated, it is excellent television.

Their new series is much more low rent – not necessarily a criticism – and plays out like Thelma & Louise retooled for the grindhouse. The films of Quentin Tarantino might be another reference point. Sky Rojo tells the story of three women escaping conscripted sex work. Eight episodes, each 25 minutes of length, it’s direct and to the point. Its visuals are as stylised as a ’90s pop video and the glamorous depiction of violence being inflicted on women will deter some. There is, however, no question that for all the sugar laid atop, Sky Rojo is an affecting mediation on prostitution.

The show’s leading women comprise an international ensemble. From Spain is Verónica Sánchez (Coral); from Cuba Yany Prado (Gina), while Argentine superstar actor-singer-songwriter Lali Espósito (Wendy) completes the trio. Each character has a different story to tell as to how they came to sex work. This takes in factors like human trafficking, addiction and escaping persecution. And yet perhaps more powerful is the time the show takes to explore the creation and motivations of the pimps persecuting and pursuing the women.

Sky Rojo doesn’t rehabilitate the triumvirate of very bad men – Asier Etxeandia as Romeo, Miguel Ángel Silvestre as Moisés, Enric Auquer as his younger brother Christian – but it does attempt to explain what led the three of them to enter the business of modern slavery. And it explores the contradictions of their misogyny. Romeo loves his wife. The two brothers adore their seriously ill mother. Yet all the while they treat the women in subjugation to them appallingly. There are some big points being made here, they’re just dulled by the fetishisation of sex work that runs throughout the show.

The creators unquestionably present forced sex work as a very bad thing – it’s likely your tears will fall in tandem with the women’s – but the lingering shots of pert bottoms, shiny stockings and flashing neon lights undo this by creating a fantasy that may be some way from the reality. Of course, this is pulp drama – Sky Rojo presents itself as trashy, page turning fiction, it’s not supposed to be documentary – but perhaps such salient points are lost when the scenes inside the women’s place of employment resemble a Pussycat Dolls open audition day.

Perhaps we’re thinking too deeply. Sky Rojo is best viewed as a celebration of female friendship, of sisterhood surviving in the face of the horrors of masculinity. It’s a cool show. An exciting one. The music is great and the performances are solid. But there will be those who find the misery its female characters are put through indicative of the suffering female characters are put through as standard in a long list of modern TV drama. The show walks a tightrope between titillation and an affecting portrait of trauma. It makes a point, several points in fact, and all of them good, but pulp fiction rarely makes points that aren’t also problematic. Your sensitivity to how this affects you will dictate whether you enjoy Sky Rojo or not.