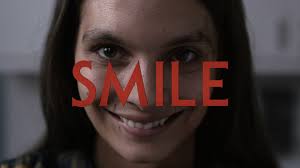 Rose is a psychiatrist plagued by what she believes to be something supernatural. After a bizarre incident with a patient, she begins to experience inexplicable phenomenons that only she can see. Throughout the film, Rose grows more paranoid that what’s pursuing her is something malevolent and, possibly, supernatural.

What makes you smile? Hopefully, whatever it is isn’t as nefarious as what’s making people smile in Paramount Picture’s new film Smile. Sosie Bacon stars as Rose, a woman trying to understand the events happening around her after witnessing a tragic death. This will be Bacon’s first lead role in a film.

Initially announced by Variety under the name Something’s Wrong With Rose in 2021, the film is written and directed by Parker Finn. Finn is known for two shorts: Laura Hasn’t Slept and The Hidebehind. The former is what Smile is based on. Marty Bowen (Love, Victor, The Hate U Give), Wyck Godfrey (Love, Victor, The Hate U Give), Isaac Klausner​​​​​​​ (The Fault in Our Stars, Looking for Alaska), and Robert Salerno (I’m Thinking of Ending Things, All the Bright Places) are producers on the film.

Dr. Rose Cotter, a psychiatrist, helps patients in a facility. One patient strikes a cord when she takes her own life in front of Rose during an appointment. After screaming over something Rose can’t see, the young girl’s face takes on a creepy smile as she has a shard of a pot in her hand. The overlay of the covered body in the trailer suggests that the patient cut a deep smile on her face and neck.

This event begins to take its toll on Rose. Everywhere she goes, she sees someone smiling eerily similar to that of her patient. She wants to know what was plaguing the girl and now her. As she walks by the room of another patient at her job, he has the same smile. When she tries to wake him from the trance he appears to be in, he starts chanting that she is going to die, seemingly telling her where the journey will end.

In her quest to understand what she’s going through, someone helps her find 20 cases of people with similar experiences. Only one of them has survived. When she talks to the survivor, he refuses to see her after finding out she sees the smiles. Based on the security footage her friend obtains, the other victims hurt themselves in front of audiences, just like her patient did.

There are clues in the trailer that Rose will end up hurt before she finds out the answer to her question. In one scene, both forearms are bandaged in gauze, though the audience doesn’t find out why. During an appointment with what seems to be her therapist, she sees the smile, and the person she’s trying to get help from seems to try and strangle her. Will Rose figure out how to stop the smile in its tracks before it’s too late?

The initial plot synopsis given confirms the smiles and what they cause are part of a supernatural entity, or at least that’s the explanation Rose has for it. Will she figure out what caused the phenomenon in the first place?

“After a bizarre, traumatic event involving a patient, a psychiatrist begins to experience terrifying occurrences that only she can see, and grows increasingly convinced that she’s being pursued by a malevolent supernatural force.”

Smile pulls iconic aspects from other famous horror films. There is only a week, or seven days, to figure out how to stop the supernatural force at work, much like the popular 2002 Naomi Watt film The Ring. The smile seems to follow her everywhere she goes, just like in the 2014 film It Follows. These aspects worked well in their respective films, and they likely will in Smile as well. It’s hard to go wrong with a supernatural force following you and a limited amount of time to figure out how to stop it.

Caitlin Stasey, featured as the patient that sets off the series of events in the film, starred as Laura in Laura Hasn’t Slept, the short the movie is based on. It isn’t clear if she is portraying the same character between the two, but it can’t hurt to check the short out before Smile hits theaters this fall.