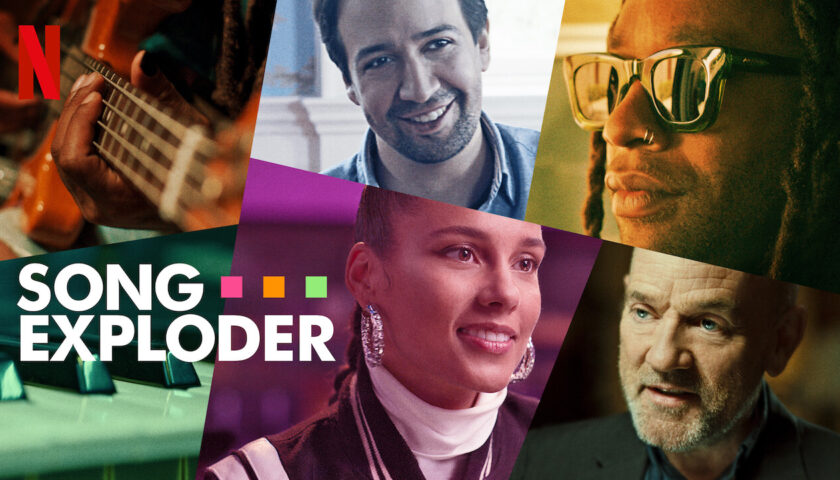 If you’re a big music fan and an avid podcast listener, you’ve probably heard of Song Exploder. The biweekly podcast created by Hrishikesh Hirway in 2014 features a range of musicians, who dive deep into the components of their hit songs and walk listeners through the process they used to create them. The show has featured U2, The Roots, Fleetwood Mac, The 1975, Selena Gomez, Weezer, The Killers, and composers for Game of Thrones and Black Panther. Now, the show has been translated from your headphones to the small screen, courtesy of Netflix.

Like the podcast, Netflix’s Song Exploder series features artists demystifying the creation of their songs, from their earliest ideas to finished recordings. The show is high-quality and comprehensive, making it perfect for viewers who want to learn more about their favorite jams. If you’re instead looking to fall in love with a featured artist for the first time, you might want to search elsewhere as you might find the episodes tedious.

There are four 22- to 27-minute episodes, each focused on a single musician and song. Alicia Keys breaks down both the celebration and mourning on her silky R&B ballad “3 Hour Drive,” Lin-Manuel Miranda recalls searching for Aaron Burr’s point of view in Hamilton‘s “Wait for It,” members of R.E.M. reflect on the unlikely success of “Losing My Religion;” and Ty Dolla $ign explains how he created an ode to his native city in the rhythmic slow jam “L.A.”

The bulk of each episode features interviews, concert photos, footage from songwriting sessions, and more. After the artists spend around 20 minutes explaining how the lyrics were written and instruments were chosen, the featured song plays in its entirety, just like in the podcast. On screen, however, the music is accompanied by moody visuals that pulse along to the beat.

Hirway is a skilled host, and its no wonder he’s created such a successful brand. He’s good at getting the musicians to open up and asks sharp follow-up questions. He also knows how to isolate the crux of a song, which is why we see him getting Lin-Manuel Miranda to bust out a voice memo of “Wait for It” he recorded on the New York City subway and R.E.M.’s Peter Buck to play through the mandolin riff in “Losing My Religion.”

Song Exploder is smoothly edited. The visuals are sleek, the story naturally progresses, and a lot of details are crammed into a limited timeframe. These explorations, as mentioned, however, are far more likely to interest these artists’ most passionate fans more than a casual music listener.

Of the four songs presented in this season of Song Exploder, I am by far the most familiar with Hamilton’s “Wait for It.” (I decorated my college graduation cap in lyrics from the musical and religiously entered the Broadway show’s ticket lottery until it closed.) While there is an insane amount of Hamilton content out there, I still enjoyed the exploration of “Wait for It” due to its personal nature and detailed focus, despite not getting a ton of new information. Relating to the other episodes, however, wasn’t quite as easy.

While I admire the musical contributions of all the featured artists, I don’t have the same connection to any of their songs, so I wasn’t as interested in the episodes centered around them. None of the segments are particularly mind-blowing or unique, and it was harder to stay engaged with the in-depth deconstructions of songs I’m not attached to, especially because they move so slowly.

Like most podcasts, an audio episode of Song Exploder can be a form of background entertainment, but the Netflix show demands more attention, meaning viewers need to be more invested. So if you’re not all in on an artist, it’s harder to want to keep watching — especially because the visual component doesn’t really add much to the show.

Song Exploder on Netflix is essentially the podcast with pictures. If you turned it on and didn’t watch the screen, you would still perfectly understand what was going on. It still plays like the podcast. And sure, it’s fun to see Alicia Keys recording in the studio or Lin-Manuel Miranda walk through Aaron Burr’s house in Pennyslvania. But just because it’s nice to see these things doesn’t make them necessary to the overall narrative.

The Netflix show is polished, but it doesn’t try to create new fans. Rather, it caters to longtime listeners who want a heavy breakdown. Song Exploder is fun if you already care, so if you’re obsessed with a particular artist that’s featured, you’re likely going to enjoy their episode. However, if you’re unfamiliar with the music in the series, it’s probably better to catch more of your faves on the podcast instead.