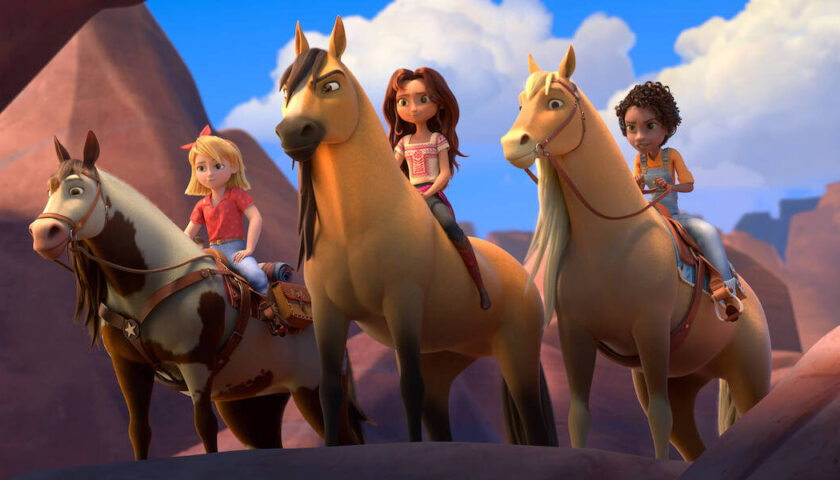 When “Spirit: Stallion of the Cimarron” hit theaters in the summer of 2002 — after an out-of-competition premiere at Cannes, no less — the DreamWorks animated adventure didn’t seem necessarily poised to kickstart a sprawling, decades-long franchise. It was mostly well-received, with some critics heralding it as a new classic while others took umbrage with some of its more predictable elements, and it pulled in a very respectful $122 million at the global box office. A mix of computer animation and traditional hand-drawn styles, the tale of a free-spirited Mustang (voiced, and this is true, by Matt Damon) and the Lakota Native American who helps save him offered a classic fable with some forward-thinking ideas, and was also just lovely to look at.

Fifteen years later, the film — which literally ends with its equine hero riding off into the sunset, the point of the entire movie — inspired a strange followup: a computer-animated Netflix series about a plucky tween girl who befriends a wild mustang named Spirit and basically folds him into her (domesticated!) life on the American frontier. The series, entitled “Spirit Riding Free,” is readying for its ninth season, to say nothing of the specials, spinoff series, and short-form selections that have accompanied it. Somehow, there’s still more: Elaine Bogan’s sweet, if slight, animated feature “Spirit Untamed,” which awkwardly reworks the story of “Riding Free” into an easily digestible 88-minute package.

In “Spirit Untamed,” screenwriters Aury Wallington and Kristin Hahn condense the long-running series into what essentially functions as an introduction to a show that has eight seasons under its belt already. It’s a strange next step for the oddly enduring franchise, if only because the audience members that will likely be most taken with “Spirit Untamed” have probably already consumed much of “Spirit Riding Free.” Gussied up with some star-powered voice recasting — no, Matt Damon does not reprise his role, but Jake Gyllenhaal and Julianne Moore are on deck as the grownups, and the kid stars come to life through stellar work by Isabela Merced, Marsai Martin, and Mckenna Grace — and a handful of stunning sequences, the film still can’t compare to the one that started this franchise, but families could do far worse when it comes to wholesome entertainment.

Like most animated adventures about cute kids and their animal pals, “Spirit Untamed” opens with heartbreak and death, as young Fortuna (mostly known by the more Anglicized “Lucky”) Prescott (voiced by Merced) and her sweet dad Jim (Gyllenhaal) ooh and ahh over her trick-horse-riding mom, who soon dies off-screen. Years later, plucky Lucky has spent her childhood growing up under the watchful eye of her Aunt Cora (Moore), who stepped in after Jim proved too heartbroken to keep his kiddo.

Lucky is a magnet for adventure and mischief, though she spends most of her time trying to enchant local wildlife, as her cloistered life has mostly kept her away from other kids. Unlike its predecessor, “Spirit Untamed” is entirely computer-animated, and while sequences involving horses and the outdoors tend to fare better, early bits that follow the film’s human characters tend to look flat and decidedly un-emotive. (Everyone, even a miniature donkey who appears throughout the film for some serious comic relief, seems to be in possession of an uncomfortably wide forehead; our eventual bad guy, obviously voiced by Walton Goggins, also has a big chin.)

After Lucky upends her grandfather’s bid for governor — a subplot never mentioned again — she and Cora are packed off to spend the summer with Jim in the charming border town of Miradero, where Lucky will suddenly be faced with her mother’s legacy. Everyone in town, it seems, knows about Lucky, and as much as Jim wants to keep her from becoming a bonafide horse girl like her mom, it isn’t to be, not with horses everywhere and horse-loving pals so eager to make her acquaintance. There’s practical Pru (Martin) and silly Abigail (Grace), and soon enough, there’s a kidnapped wild mustang named Spirit who Lucky believes she can make into her own faithful steed.

In the grand tradition of children’s films oriented around animals, it’s deeply upsetting at times, particularly as the girls grapple with the actual, uh, spirit of the story: that wild animals deserve to be wild. The trio bond just as Spirit’s family (including, of course, a tiny little foal clearly meant to pull the heartstrings, it works, dammit) is rounded up and packed off on a train bound for, well, nowhere good. Soon, they’re off on an adventure that helps dilute the episodic feel that plagues the rest of the film, focusing the plot on one big, grand journey that builds on the best bits of “Spirit Untamed.”

Still, it’s an endeavor that does feel mostly at loose ends, an unwieldy story that needs to either be cut down to its most cohesive pieces and most striking sequences or stretched out into, well, maybe not eight seasons of a show, but something like it. Fans of the original film will still find something beautiful underneath, and “Riding Free” acolytes will likely delight in seeing a splashier take on a story they already love. Everyone else, however, might wonder when they can hope to be set free from this story, just like Spirit.