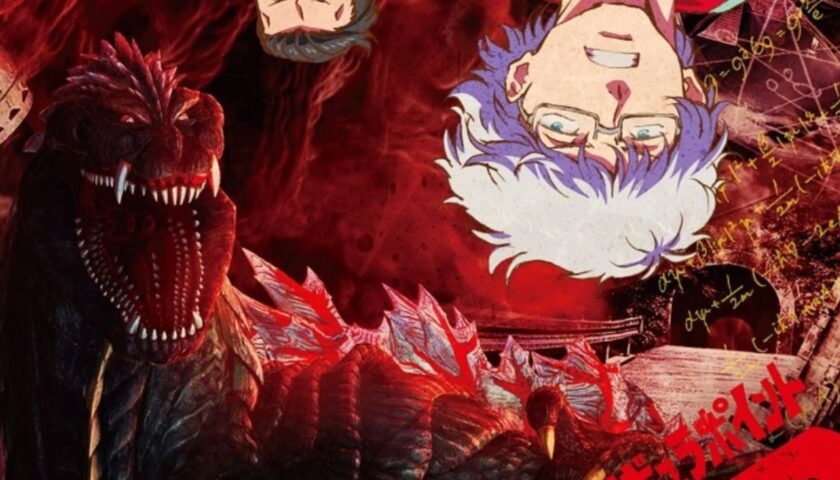 In Godzilla Singular Point, Netflix parlays the novelty of an anime King of the Monsters into an ambitious 13-episode series, written by physicist turned science fiction author Toh EnJoe, directed by Atsushi Takahashi (Blue Exorcist: The Movie), and animated by studios Bones and Orange. The series will be available to stream globally on June 24, but on Netflix Japan, it’s been following a weekly release schedule since March so that subscribers can now access the first 10 episodes.

I live in Japan and have been following the series as it has aired here. And let me tell you: fans of giant monsters need to have this series on their radar for its worldwide debut.

Fans who were sour on the previous 3DCG anime trilogy by Polygon Pictures (which also streams on Netflix) may find a much-needed palate cleanser in Godzilla Singular Point. This is an all-new story, not connected to the movies, and most of the animation is hand-drawn, which gives it a texture more in line with traditional anime. The kaiju are still animated in 3D and some of them are greatly reduced in size, but for the most part, they blend in better with their surrounding environment.

Eiji Yamamori, who served as the key animator on every Hayao Miyazaki film from Princess Mononoke onward, provides the creature designs. Blue Exorcist creator Kazue Kato handles the human characters, who are front-and-center with their embattled mech, Jet Jaguar, as they attempt to stave off a red apocalypse prefigured by pterosaurs (mini Rodans), an ankylosaurus (mini Anguirus), giant sea snakes (multiple Mandas), and overgrown spiders (unofficial Kumongas). The guest of honor, Godzilla, arrives typically late to this kaiju party and when he does, it just might mean the end of the world.

Each episode of Godzilla Singular Point has a one-word English title, but the original Japanese title of the second ep, “Manatsu Oni Matsuri,” translates as “Midsummer Demon Festival.” As the series opens, that’s the general vibe in Nigashio, an apparently fictional city in the real-life Chiba Prefecture. Here, we see a team of men in happi coats waiting at the train tracks with a street festival float. Futuristic flying lanterns clue us into the time setting of 2030.

Obon, the Japanese equivalent of Halloween, comes in July or August so summer is the time for ghost stories and Godzilla Singular Point taps into that right away. After a short intro that plays like stream-of-consciousness gone haywire (more on that later), the first word of lucid dialogue spoken by a disembodied voice is literally yurei (ghost). It comes in the context of “Yurei yashiki?” which the English subtitles render as “Haunted mansion?”

They’re not talking about the Disney attraction. The voice belongs to Yun Arikawa (Shoya Ishige), a blue-haired programmer. He’s on a scooter with his coworker, Haberu “Barbell” Kato (Taro Kikuchi). As representatives of Otaki Factory — “solutions in home repair and all things supernatural” — they’ve been sent to investigate a deserted mansion with flickering lights. Strange noises emanate from it at night and rumors attribute this activity to a yurei or vampire.

So far, so good. Yun and Haberu aren’t quite Ghostbusters, but they do employ ghost detectors and they do discover a secret passageway in the mansion. This all happens in the first five minutes of episode one, so it’s not a tremendous spoiler to say that they find a radio playing a spooky song with a palindromic title.

That sets the tone for Godzilla Singular Point. The show’s byzantine plot unfolds like a mystery. At times, Kan Sawada’s soundtrack gives it the mood of a suspense thriller. Yet as much as it might flirt with the occult, this is a work of hard science fiction that’s just as likely to mention UFOs or SETI (the search for extraterrestrial intelligence). There’s talk of transtemporal dimensions and orthogonal diagonalizers and a lot of other technobabble; some of it comes in moments where all that’s onscreen is a rapid-fire smartphone chat.

The subtitles fly by, so it’s not the kind of series you’ll want to have on in the background while you’re clipping your toenails. This thing demands your full attention. It lures the viewer in with an atmosphere of intrigue and if you’re of the right persuasion, you might find yourself bingeing its 23-minute episodes in an addictive fashion. Just don’t expect to see the King of Monsters right away.

The first glimpse of something resembling a kaiju comes from a mural at a bus stop, where the other purple-haired main character, Mei Kamino (Yume Miyamoto), stands waiting. She’s a graduate student in Biologia Phantastica, the study of imaginary creatures (fishes that swim through time, butterflies in the fourth dimension). “It’s about understanding this world by studying things that don’t exist in this world,” she says, sounding every bit like one of us people who thrive on film and television discussion.

In the mural, a fearsome, shark-like leviathan can be seen swimming through a red tide while a Japanese archer fends off a flock of attendant pterosaurs. This dovetails with a local legend about an apocalyptic monster that emerges from the sea when it turns red. Three guesses who that might be…

The Godzilla franchise isn’t exactly known for memorable human characters, but the namesake of Otaki Factory, Goro Otaki (Wataru Takagi), arrives like the cartoonish cure for that. He’s a lazy-eyed coot who’s “caused uproars about aliens and underground civilizations” and who’s “invested all his personal assets to build a robot to protect Earth.” Said robot is none other than Jet Jaguar, an obscure character from Toho’s 67-year-old Godzilla film series, here reimagined as a ground-level mech (as opposed to a giant Ultraman knock-off).

The inclusion of Goro/Jet Jaguar, arguably the real standouts of the series thus far, allows for some fun action with an old man in a mech versus monsters. Highlights include a fight between him and the first of many Rodans — Godzilla’s earliest heralds, here likened to Quetzalcoatlus specimens — and another one between him and Anguirus, whose timey-wimey spikes can seemingly predict and deflect bullets.

Anguirus is initially small enough that it almost looks like Yun could throw a saddle over him and ride him, if not for those spikes. We later see the monster chasing a truck across a golf course. By then, he’s grown larger, but fans still shouldn’t expect to see him towering over buildings.

So far, I’ve found Godzilla Singular Point eminently watchable and enjoyable, but because it’s not available outside Japan yet, I’ve also been in a media vacuum where I’m left wondering what the audience reaction will be in the rest of the world. A common complaint about the 2014 Godzilla movie was that it withheld sight of the title monster too much. Godzilla only had eight minutes of screen time in the 123-minute film that bears his name.

I haven’t clocked his screen time in Godzilla Singular Point, but if I had to hazard a guess, I would say he has about the same amount, spread out over the first 10 episodes. For me, that hasn’t been a deal-breaker because the characters and the world they inhabit have proven absorbing enough on their own to keep me invested as a viewer.

Back in March, my chief criticism of Pacific Rim: The Black, another mech-and-monster anime on Netflix, was that it skipped straight to the post-apocalypse in the franchise that supposedly canceled the apocalypse. Godzilla Singular Point puts the end of the world — or a disaster very much like it — back onscreen. Winged creatures come flying out of a blood-red ocean like Lovecraftian emissaries. Flashes of empty store shelves and crowds full of face masks recall real-life pandemic scenes in Tokyo over the last year. We even see the words “Social Distance” printed like a brand name on a smartphone cover.

Singular Point moves into its last act this month and it’s possible they wanted to save Godzilla, the boss kaiju, for the big finish, while focusing on other franchise monsters, old and new, as harbingers of the apocalypse. It needs to be said, however, that this is shaping up to be another one of those Godzilla stories where there’s very little actual Godzilla, at least in the first two acts. EnJoe and Takahashi clearly favor the less-is-more approach. It’s not until the ninth episode when we really get a good look at Godzilla, and to their credit, they manage to paint him as an appropriately fearsome symbol of catastrophe.

Parts of Godzilla Singular Point feel indebted to the works of Hideaki Anno, and not only his live-action Shin Godzilla, but also Neon Genesis Evangelion. When the King of Monsters makes his first cameo, it’s in a pre-evolved form, more whale than gorilla. A glimpse is all we get, but he has fins instead of legs and as he breaches the ocean’s surface, you might not even recognize him were it not for the familiar fanfare of Akira Ifukube’s classic theme (which never quite resolves itself in a full march, as if to musically reinforce that the character is not yet whole).

On land, Godzilla is hidden in a cloud of red dust, but at one point, it’s like the animators took a page right out of the Shin Godzilla playbook and decided to encase him in coagulant (similar to how he’s portrayed in a statue near Tokyo Station). Images of tanks firing over guardrails and monsters leaping out of the water next to battleships might have precedents in the live-action Godzilla film series, but seeing them depicted in anime for the first time brings to mind Evangelion episodes like “Asuka Arrives in Japan.”

EnJoe also has Anno’s penchant for hyper-referentiality. In addition to the technobabble, literary and religious allusions abound, with characters name-dropping and quoting the likes of Walt Whitman, Dante’s Inferno, William Blake’s “The Tyger,” the Book of Revelation, and the Bhagavad Gita (by way of Robert Oppenheimer). Instead of NERV headquarters with Lilith on a cross in the basement, there’s an abandoned black military facility with a Godzilla skeleton in the basement. Instead of the Spear of Longinus, there’s the Spear of Anguirus.

The aforementioned intro to episode one shows sheet music, equations, squiggly lines, and abstract sketches of what look like extra-dimensional eyes—“incomprehensible doodles,” as one character later calls them. Disjointed thoughts from different people unspool in voiceover and, for a moment, it’s as if we’re right back at the end of the Evangelion TV series, getting lost in the shared headspace of Shinji Ikari and other characters.

Where the last three episodes will take us is anyone’s guess, but as it builds toward Armageddon, Godzilla Singular Point has the makings of an epic in the vein of The End of Evangelion. I don’t want to overhype it, but that’s not a comparison I make lightly. Godzilla Singular Point offers a much more cerebral take on the King of Monsters than the recent Hollywood smash-em-up Godzilla vs. Kong. In a franchise as long-running as this one, there’s room for both popcorn flicks and more densely layered, novelistic TV shows. Godzilla Singular Point fits the latter bill. It’s an impressive new homegrown Japanese spin on the King of Monsters and it may just be the rightful anime heir to Shin Godzilla.