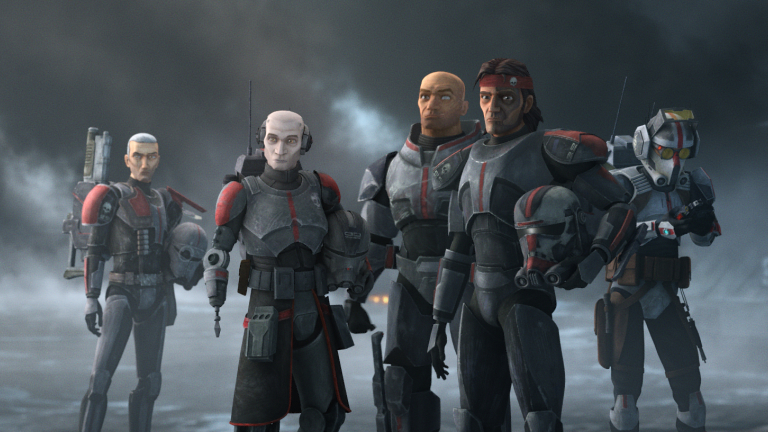 A long time, in a galaxy far, far away, a crack team of five genetically modified commando clones known as the Bad Batch witness the execution of Order 66, which wipes out the Jedis, and ends the Clone Wars. The team’s rebellious spirit puts them at odds with their fellow clones — and the newly formed Galactic Empire.

Star Wars: The Clone Wars, the animated series that filled in the gaps between Attack Of The Clones and Revenge Of The Sith, was not perfect; after 133 episodes, you’re going to get some crude matter in amongst the luminous beings. But at its best, Dave Filoni’s series had some of the most satisfying storytelling and world-building that Star Wars’ vast mythology has to offer: fleshing out minor characters with rich, years-long narratives, and offering human (or human-like alien) stories in-between the flashy lightsaber battles. Somehow, at its peak, a cartoon often managed to feel less cartoonish than the live-action prequels it was inspired by.

From the initial title fade — the Clone Wars logo burns through to reveal the Bad Batch logo — to the staple newsreel-style voice announcing the episode, it’s clear that the new series promises more of the same. It’s a spin-off directly linked to its mother show, focusing on Clone Force 99 (aka the Bad Batch), a group of specialist troopers previously seen in Clone Wars’ seventh season, and — with shades of The Magnificent Seven or The Dirty Dozen — a premise true to the franchise’s founding pulp principles.

It certainly looks and feels like its predecessor. The animation, retaining The Clone Wars’ house style, is superb for what it is: marionette-style CG caricatures rendered at made-for-TV quality, but cinematic in scale and ambition. It still seems geared mostly towards a younger audience, especially in some of the cheesy dialogue and goofy voices (though credit to Dee Bradley Baker for voicing multiple shades of the same DNA) — but with enough edge and depth to the storytelling to hold a grown-up’s interest.

So far, so familiar. But the switch in focus here, from headline-grabbing Jedis to lowly clones, is immediately interesting. The Clone Wars dedicated several notable arcs to clones like Cut Lawquane breaking free of their militarised programming; this is a whole show about it. The new setting is compelling too, arriving at the end of the Clone Wars and the turbulent nascent years of the Empire. The feature-length first episode begins just as the genocidal Order 66 is deployed (and with it, liberty dying with thunderous applause); like all good Star Wars stories, this takes the side of the outsider.

Naturally, it’s also a Star Wars story deeply entrenched in the corner of the universe in which it was forged. (The concept originated with George Lucas himself.) Despite giving clones centre-stage, appearances from Palpatine and Tarkin, among others, keep proceedings tied to the ‘main’ series, and while the Star Wars faithful will no doubt be sated, you’d hope The Bad Batch will eventually be confident enough to plough its own furrow. Like The Clone Wars — which began with a mixed bag of a feature-length story, before finding its feet in later seasons — the best of The Bad Batch may yet be to come.