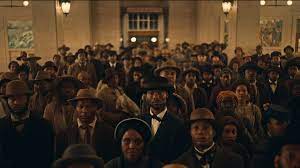 After his work on If Beale Street Could Talk, Barry Jenkins travels further back in time with The Underground Railroad. As much of American history will attest to, violence carried out against Black people is circular. Everything repeats, changes, repeats again. Based on the book by Colson Whitehead, this ten-part Amazon Studio series is constructed to embody that very fact. It studies the recurrence throughout, via different genre conventions and a touch of magic realism — reimagining the real Underground Railroad as a literal subway, run by jovial train conductors. Later episodes lean into surrealism as the characters feel literally and existentially lost, examining their constant fleeing. Not to say that the show is a perpetual museum tour of Black trauma; The Underground Railroad is sensitive and respectful throughout. It’s easy for a work like this to become sensationalist, but the violence here, though potentially wearying, is never treated as spectacle. It feels truthful rather than exploitative.

The story follows runaways Cora (Thuso Mbedu) and Caesar (Aaron Pierre) as they flee the slave state of Georgia via the railroad, each new station taking them across the American Southeast, every state offering its own malevolence. But this is not just a tale of suffering. There is also beauty, as all the visual hallmarks of Jenkins’ cinematic work are on display. James Laxton’s sumptuous camerawork and evocation of portraiture feel fully invested in the characters’ inner lives rather than just their bodies, every scene linked to a subjective point of view. That fine visual work is bolstered by a grand score of haunting, emotive strings from Nicholas Britell, simply his most beautiful work yet.

The writing is equally striking, with dialogue that feels both naturalistic and poetic, revealing but not didactic. There are moments of vibrancy and humanity, flirtations and jokes, that other stories based around slavery often leave at the wayside — it’s as interested as Moonlight in love growing amid austerity. Further to that, each episode culminates in audacious needle drops — look out for Outkast’s ‘Bombs Over Baghdad’ and a chopped and screwed version of ‘Money Trees’ — that can feel like a shot of irreverence from Jenkins, with an almost amusingly direct correspondence between the episode and the lyrics. But they’re not jokes: they further the show’s implicit conversations between the past and the present, those song-choices acting as a kind of contemporary ‘testimony’, the stories required to gain admission to the railroad.

The show’s avoidance of sensationalising this era extends to its casting, which avoids spectacle and the magnetism of stardom for the majority of the white characters. This leaves the spotlight on Mbedu’s riveting performance as Cora. Her constant transformation is performed with such emotional acuity, her psychology constantly clear without being overstated. Through Cora’s experiences — events that become part of her “testimony” — the series looks at the mechanics of anti-Blackness, focusing on how it perpetuates through capitalist systems, as well as responses to it.

Anti-Blackness isn’t shocking, it’s a fact of our lives. So, when TV shows seek to deal with Black communal and historical trauma, it feels patronising to treat it as a surprise. The Underground Railroad pursues depth of character instead of a need to provoke; it would rather elucidate and examine emotional specifics rather than just violence in itself — and a frequent atmospheric unease often forewarns the inevitable. Crucially, Jenkins doesn’t leave emotional distance from the series’ antagonists either. The slave-catcher Ridgeway (Joel Edgerton) is not a caricature of sneering evil but a recognisable person, his contempt visibly borne of privileged entitlement as well as a twisted careerism. An episode dedicated to his relationship with his father (Peter Mullan) keeps him human, but not sympathetic. He’s irredeemable, and he’s real.

That differentiates it from more self-important contemporaries — like Antebellum and Amazon’s own Them — which imagine racism as something cartoonish and less-than-real, observing Black trauma with morbid and degradative fascination. Unlike those works, The Underground Railroad has a perspective beyond simply observing the horror of oppression. It explores how white allyship can be used as a veil; the idea of bootstrapping (the fallacy that working hard will save you); that capitalism will prove an equaliser (it doesn’t); and questions what emancipation even means in a country with such bloody foundations.