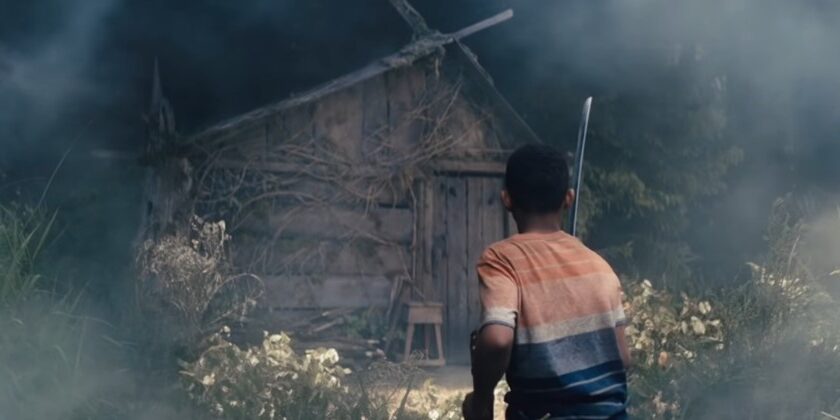 A boy sets out on a quest to save his ill mother by searching for a mythic figure said to have magical healing powers.

Family adventure doesn’t always have to be 100% child-friendly. It’s something I think we can all agree on and an aspect of David Oyelowo’s (written by Emma Needell) The Water Man that would elevate it above mediocrity should it have stuck to its (water) guns rather than chicken out on really exploring some dark subject matter for a film rated PG.

Relative newcomer Lonnie Chavis plays young Gunner, an aspiring graphic novel artist attempting to write a story about a detective investigating his own murder. Death seems perpetually stuck on the boy’s mind (after his family moves into this small town, he shows up to a random funeral jotting down notes for his own writing). Once we learn about the looming inevitable tragedy coming within the family, it’s understandable. Gunner’s mother, Mary (a somewhat underutilized Rosario Dawson), has leukemia, and it’s only getting worse.

As Gunner learns that his mother is not getting better, he swaps all of the books he checked out from the library on murder to scientific ones, going as far as using his newfound knowledge to recommend types of medication to the nurse. Death comes for us all, some sooner than others, and it’s unavoidable, which is the primary lesson here in The Water Man. It’s not the first children’s fantasy film about processing death and probably won’t be the last, but it’s typically ambitious storytelling to be admired.

Pulling double duty as Gunner’s father, David Oyelowo is frequently at odds with the child and far less supportive of his artistic endeavors than his wife. Accidentally, he also ruins one of Gunner’s sketches which turns out to be on the final straw, causing the boy to head outside to destress. From there, he comes across a bearded local played by Alfred Molina that dumps a whole bunch of mythology exposition about a great flood that took him many lives in the town, and how one of those people came back to life thanks to finding a stone while mining. The legend earned him the name of The Water Man, and the story goes that he is roaming the nearby forest, still looking for his deceased wife to bring her back to life.

With the help of a slightly older girl named Jo (Amiah Miller, rocking some cotton candy-colored hair), who mysteriously is always hanging out around an abandoned mill with graffiti all over the walls about the folktale, they set out into the forest on a mission. Obviously, Gunnar wants to find The Water Man and is thrilled that Jo claims to know where to find him, but there is a sadder and heartbreaking dynamic under the surface. Jo bears a scar on her neck that she tells is the work of the titular supernatural being, but to adults, it’s clear that something darker is going on, whether it’s self-harm or abuse at home.

From the stampede of horses to snowing in July, The Water Man has its fair share of fantastical moments, except they unfortunately never feel majestic. There’s never a real sense of urgency or adventure, even when we learn that a forest fire is spreading and could consume them all unless the dad uncovers where his son went and saves the day. It is as lazily resolved as Alfred Molina showing up for one more scene.

What does work is that the chemistry between Gunnar and Jo is ever-shifting; one minute, they will be getting along. Another, there will be some roughhousing with Jo expressing a range of emotions from pain to jealousy. Meanwhile, dad has another difficult decision to make; choosing to tell Mary that their boy is missing or falling into the same mistake of hiding things from loved ones because he feels they won’t be able to handle it. These character dynamics are intriguing, but aside from exquisite photography from Matthew J. Lloyd, they are deserving of a tighter script that’s more connected and emotionally resonant. However, as far as directorial debut does go, The Water Man is still a worthwhile first effort from David Oyelowo with the right mindset to provide something of actual substance for people of all ages.