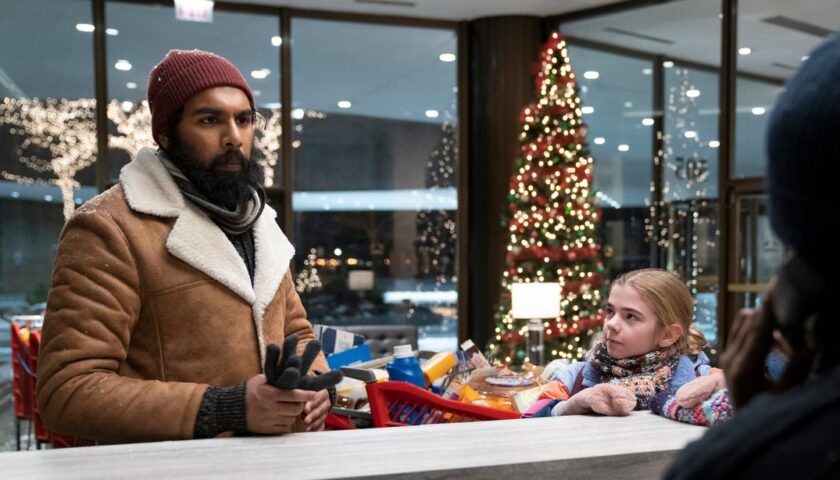 Suppose there’s a pandemic. Whoops! And it alters the future’s trajectory. Been there. It doesn’t take much imagination to connect to the premise of HBO Max’s 10-episode miniseries “Station Eleven”: A deadly swine flu rapidly devastates the Earth’s population. The disaster sends civilization in a tailspin as the few survivors attempt to carve out the rest of their lives against a post-technological backdrop.

Based on Emily St. John Mandel’s 2014 debut novel, which won the prestigious Arthur C. Clarke award, the literary dystopia set in the Great Lakes region has a theater-geek twist. The sudden death of movie star Arthur Leander (Gael Garcia Bernal) of an apparent heart attack on stage while playing King Lear at Toronto’s Elgin Theater heralds the arrival of bad times. From the moment of his collapse, the series spirals out, touching first on the aftermath for 8-year-old Kirsten (nimble Matilda Lawler), the bookish cast member who idolized Arthur and will become the series lead. She’s rescued by a sympathetic audience member, Jeevan (Himesh Patel, “EastEnders”) whose health-worker sister has confided in him: This flu isn’t playing. Grab supplies and hunker down, she advises.

Having established the viral apocalypse, the episodes bounce back and forth in time – from the days, weeks and years before Day Zero, to two decades in the future. Little Kirsten matures into an attractive nomadic performer, played by Mackenzie Davis (“Happiest Season”) in a way that recalls the image of a gangly Uma Thurman chilling in rural Woodstock, New York. She has joined the Traveling Symphony, a communal Shakespearean troupe that circles the Great Lakes biennially, sharing the power of theater and music to the raggedy survivors. Twenty years later, Kirsten still clutches the prophetic graphic novel Leander gave her before he croaked, entitled “Station Eleven.”

This oscillating in time disorients, which may be the intent of creator Patrick Somerville (“Maniac,” “The Leftovers”). The point is to unravel the backstories of all the various characters – the feckless star’s rise and fall as a thespian; his first wife, the graphic novel creator Miranda (Danielle Deadwyler of “The Harder They Fall”); the audience member Jeevan who rushes on stage to revive Leander, only to rescue Kirsten; Leander’s best friend; and Kirsten, both young and old. The show climaxes when Kirsten finds herself and her artist pals attracting the attention of a religious fanatic, The Prophet (Daniel Zovatto), who sees in the pandemic a punishment for man’s follies, Shakespeare included.

For theater geeks, the show makes the dynamic of channeling early trauma into fictional characters explicit. For example, scenes that dramatize young Kirsten reacting to her parents’ fates later become emotional source material. Her older persona milks these traumatic memories to access the powerful feelings underlying the internal tragedy of Hamlet, whom she’s playing in a gender-neutral production. It’s an interesting trick: the play within the play within the pandemic.

Whether you consider Kirsten’s future hippie collective a haven or a hell may depend in part on your feelings about a communal actors’ utopia. It struck me as a little too close to the itchy-socked, Birkenstocks-wearing groovy folks that follow The Grateful Dead. At times, “Station Eleven” is unintentionally silly and self-serious.

The show is stronger when it focuses on the storyline of Arthur’s first wife, Miranda, with whom author Mandel revealed to The Los Angeles Times she has a strong affinity. A seasoned businesswoman and logistics expert, Miranda’s a smart, self-assured and dynamic figure who won’t stand for BS, whether in business or marriage. As played by Deadwyler, she’s compelling and eminently watchable. Garcia Bernal has fun embodying the egotistical actor from young aspirant to movie star. (Who knows what past experience he’s channeling?) Patel’s warmth, empathy and irony grounds the series.

If you can keep track of the diverse characters young and old, randomly ricocheting through time, and enjoy a bit of the Bard tossed in for good measure-for-measure, this ensemble sci-fi series envisions the post-pandemic future and offers a variety of fictional possibilities. If you’re sick of pandemic parables, it may help to remember that Mandel originally published the source material in 2014. Besides, contagion fiction is as old as Edgar Allen Poe’s “The Masque of the Red Death” — even older if you consider the Old Testament’s frogs and boils. To quote Exodus 9:14: “For this time I will send all my plagues on you yourself, and on your servants and your people, so that you may know that there is none like me in all the earth.”