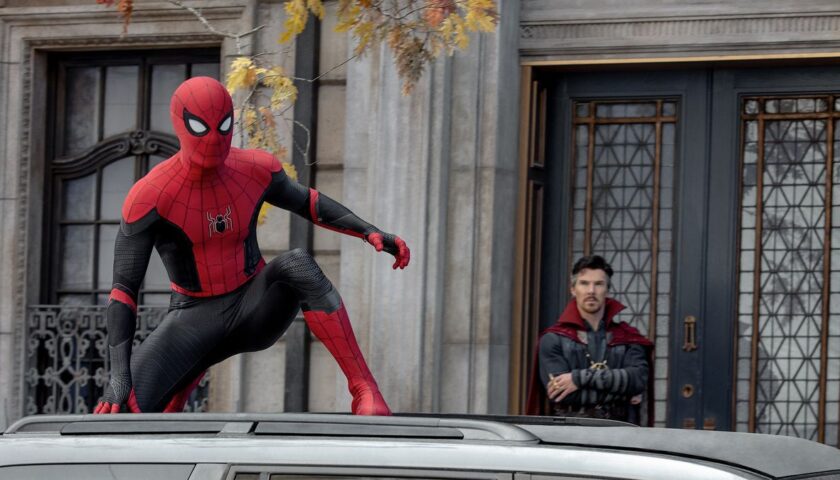 If you thought this was going to be the biggest Spider-Man movie ever, you might be right. With at least five villains, rumors of returning Spider-Men, a record-breaking trailer and the concept of the multiverse opening it all up, Spider-Man: No Way Home plays just about every trump card it has to claim the title of next Avengers: Endgame.

For the most part, everything works. Just make sure you’ve seen all the previous Spider-Man movies. Despite an inevitably tangled web of characters, backstories and motivations, No Way Home manages a surprisingly tidy plot if you understand where each player comes from. Watch Spider-Man’s back-catalog and you’ll be in the know as to why the people at the back of the theater are cheering at any given moment.

And if you’re not intimately acquainted with two decades of previous Spider-Man films? If you’re here for simply a well-oiled and entertaining Marvel (and Sony) flick, you won’t be disappointed. You might not fully appreciate the scale of what’s essentially the live-action equivalent of Spider-Man: Into the Spider-Verse, aka the best (or second-best) Spider-Man movie ever. But you’ll be treated to likeable heroes with relatable character development; slick, dynamic actions scenes; weird, wacky humor; high stakes; powerful emotional punches; and at least one incredible one-liner, delivered by Aunt May (Marisa Tomei) of all people.

Basically, this is the Tom Holland Spider-Man movie that feels most like the previous Tobey Maguire and Andrew Garfield installments. Director Jon Watts deals with real consequences, a darker tone in general and a recognizable New York setting (with a few Marvel Cinematic Universe touches). In other words, the third Holland entry truly makes up for the filler that was Spider-Man: Far From Home.

The basic premise sees Peter Parker deal with the fallout of events right at the end of Far From Home. His secret identity is known to the public, combined with the small (fabricated) detail that he murdered Mysterio (Jake Gyllenhaal). Now, with a savage media after him, fronted by the glorious (but underused) J. Jonah Jameson (J.K. Simmons), Peter must adjust to a difficult existence chased into the uncomfortable spotlight of the public eye.

If you gathered this plot point from the record-breaking trailer, you could argue it isn’t reason enough to warrant Peter’s next decision: going to Doctor Strange (Benedict Cumberbatch) and requesting the sorcerer cast a spell that reverses everything back to normal. This idea begins as sweet hijinks in keeping with the John Hughes-influenced high school fun ‘n’ games of Holland’s first two outings. But what follows is a surprising, expectations-toying spectacle with a deeper thematic heft.

Marvel advertised the inclusion of returning villains, including the Green Goblin (Willem Dafoe), Doctor Octopus (Alfred Molina), Electro (Jamie Foxx), Sandman (Thomas Hayden Church) and The Lizard (Rhys Ifans). Maybe this was to warn you to study up on their backstories. Only one or two lines are provided to explain why each villain reacts in they way they do to a storyline that plunges them in a different universe.

The standouts are the Green Goblin and Doctor Octopus. Thanks to Marvel’s digital de-aging technology, Dafoe and Molina mostly look like they did nearly two decades ago when they appeared in Sam Raimi’s original Spider-Man trilogy — mostly, because sometimes it looks like an Instagram beauty filter has been placed strategically over certain parts of the screen.

The visual effects in general have been parceled out and tapered down, so that we don’t have to sift through the effects-heavy murk-storm of Far From Home. The action scenes, featuring hand-to-hand combat, feel more practical and visceral. Grittier, sweatier, bloodier. A first-person perspective straps you in for a dizzying ride with Spider-Man swinging from A to B. Small details, such as Peter using his webs to grab things around Aunt May’s apartment, add welcome charm and color. This time, Peter also exercises his Spidey senses, so that the often-joked-about “Peter tingle” is now a real asset — one that we can finally feel too, via sound effects and a close-up on Holland’s face.

A sequence with Doctor Strange is not only trippy and eye-popping, but it gives Peter a chance to use his other superpower: his brain. Holland’s iteration, while younger than the previous two, rarely has the opportunities to utilize this less-flashy asset. A scientific prodigy in the comics, Holland’s on-screen version verged on being painted as a frustratingly naive and gullible athlete. But this time around, he fares much better (though Spidey’s trademark quips, apart from one scene with Doc Ock, are still sorely lacking).

Holland also gets to showcase his dramatic acting talents, more than just his effortless likability. The darker, PG-rated material pushes Holland to burning, emotional places. His eyes flicker with the difficult moral decisions nagging Peter. Special mentions go to Zendaya and Jacob Batalon (Peter’s best friend, Ned). MJ has much more to do this time around, despite playing Peter’s girlfriend and inevitably finding herself falling from a tall building in the third act. MJ is even gifted a thread of character growth. But be warned, such gifts can so quickly be taken away (sigh).

The camera work is slicker, the dialogue is snappier and the inner turmoil of our hero churns nicely along. A Russo Brothers influence can almost be felt ushering Holland’s third Spider-Man escapade into new, weightier territory. If the character is to become the next Tony Stark, this is the way to etch a few more scars into a more interesting hero’s facade.

In other words, if you came for the biggest movie of the year, you’ll definitely leave satisfied.