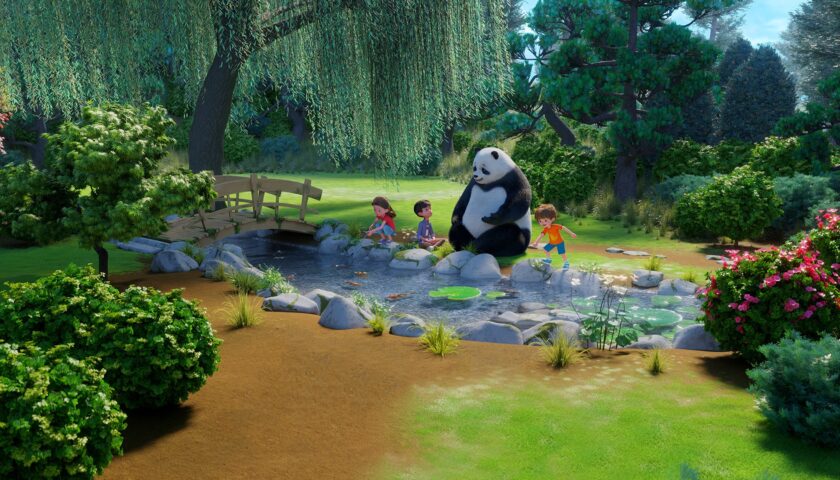 Apple TV+ continues its inspired streak of children’s fare with an adaptation of Jon J Muth’s Zen storytelling book series. Stillwater takes the central character from those books, a stoic and wise panda, and pits him against the foibles of three young kids.

Stillwater, which lands on Apple TV+ today, feels like a kind of classic PBS kids cartoon. It’s all about trying to prepare pipsqueaks for life’s disappointments by teaching them how to shift their perspective — and understand that some of life is beyond our control. There’s an awful lot to enjoy in this one.

Jon J Muth has written dozens of comics and books, but none are as beloved as his children’s books in the Zen series. In them, a panda named Stillwater teaches lessons, culled from Zen Buddhism, Taoism or other Eastern religious philosophies. Stillwater’s job was to help kids see around the everyday catastrophes that can sometimes stop them in their tracks. Stillwater’s anecdotes to the kids would help them compartmentalize their sadnesses and defeats.

The books were, in other words, ripe for adaptation for two big reason. One, they feature an adorable protagonist in the form of a giant panda hero. And two, the stories can help children get through their days with newfound and hard-earned wisdom. In the Apple TV+ series, Stillwater helps three neighbor kids through little problems that seem big (a dog not returning your affection, games seeming difficult, a rainy day ruining your plans for the day). With help from stories and fables, they come to see that not only is problem-solving easier than they imagined, but that a little hardship is just part of life.

The show is directed by longtime animation veterans Roy Burdine, Gary Hartle, Jun Falkenstein and Amber Tornquist Hollinger. (The latter two handled direction and art direction on The Tigger Movie.) Done in stunning computer-generated animation, the world of Stillwater and his three charges overflows with detail and personality.

The environment has a purposeful, pleasing simplicity, and yet is richly nuanced. Each glimpse at a koi pond, the panda’s fur, a paper lamp or the night sky is as specific and immaculately textured as possible. The faces of the kids in fact look more broad. There’s just no way a human face can stay pleasant and happy if you’re applying the level of detail of Stillwater’s fur. Ironically it serves the show to leave the kids’ skin less exact.

The bulk of the show takes place in the pleasantly loping and slow world of Stillwater and the kids. However, when disappointment strikes, Stillwater tells stories that are shown in a hand-drawn animation style, less reliant on realistic surfaces. The anthropomorphic jungle cats, parrots, mice and scorpions are all brightly colored and animated so that frames are dropped to further differentiate the two modes.

It’s a toss-up which of the two styles is more pleasing to the eye. But the split between them allows the animators to get more experimental and far out than when showing the kids going through their relatively mundane daily lives. The show never talks down to its young audience. And you can reasonably expect Stillwater to draw in older viewers with its pretty images and “good vibes” story beats.

It’s not the most revolutionary approach to kids entertainment, but it is agreeably written and top-shelf stuff from a craft standpoint. I suspect the show will face some criticism from a cultural standpoint. (A white author like Muth offering lessons in Buddhism through the avatar of a talking panda is bound to raise some brows). But the show is goodhearted, and anything that helps kids avert meltdowns is welcome on-screen.