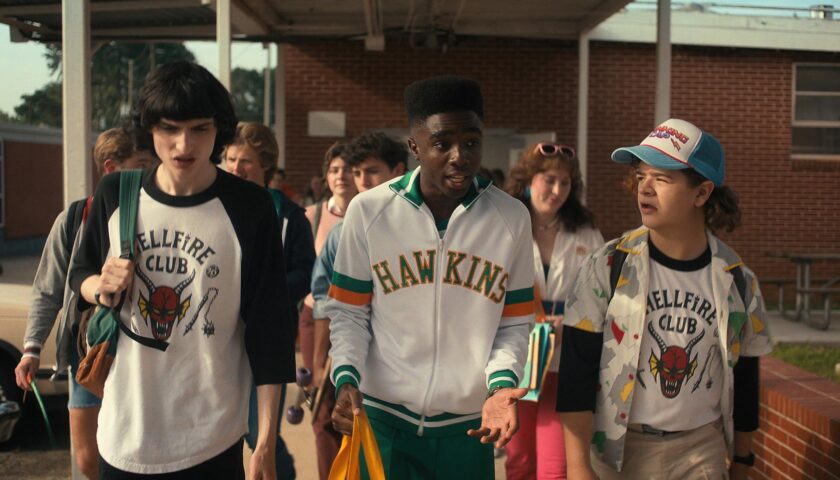 Immediately upon opening “Stranger Things” Season 4, Volume I, you might notice that the shortest episode runs 62 minutes, the longest a solid 98(!), and the average around 72. Your reaction to this (not to mention the fact that the final Volume II chapter premiering in July will feature an astonishing run time of two and a half hours) will likely dictate how much you’ll enjoy this fourth season in general. Either you’re psyched for more “Stranger Things” — the bigger, the better! — or you’re currently squinting at these words on your screen trying to parse out what, exactly, could necessitate this many more minutes for a show that was once a decently fun pastiche of ’80s adventure movies.

Watching the show’s grand return at the same time that Netflix has hit its first real roadblocks as a streaming service and tech company makes for a surreal experience, if at least a fitting one. After becoming Netflix’s first real behemoth of a pop culture hit, the Duffer Brothers’ increasingly ambitious series both echoed the rapid expansion of its network and clearly informed the way it moved forward with other projects that might scratch similar itches. (You can draw a straight line from the “Stranger Things” ‘80s nostalgia machine to something like “The Adam Project,” the recent Netflix movie seemingly spat out by its almighty algorithm.) Season 4, given all the time and money it could want, represents just how exponentially “Stranger Things” has grown and how much it’s allowed to indulge its every instinct, so long as it keeps subscribers logged in just a few (hundred) minutes more.

From a narrative point of view, at least, the answer’s simple. As the central four boys — once tweens, now such young adults that the bass in their dropped voices practically rumble through the walls — have learned after playing hours upon hours of Dungeons and Dragons, a straightforward quest can twist and multiply into something far more complex and far-reaching given enough time. Now, six years after the show first dropped, “Stranger Things” has significantly leveled up its mythology to complicate its stories well beyond its initial bounds. It’s also scattered its characters to the wind enough that checking in with all of them has become increasingly difficult, to the point that, apparently, there is just no trimming it all down to fit the confines of a traditional TV episode.

Throughout the seven episodes premiering May 27, the cast ends up split between several groups and locations. The season opens in 1986 with the Byers family — Joyce (Winona Ryder), Jonathan (Charlie Heaton), Will (Noah Schnapp) — living in California, where newly adopted Eleven struggles to fit in amidst all the sneering, blonde bullies. Back in Hawkins, Mike (Finn Wolfhard) and Dustin (Gaten Matarazzo) have joined their new high school’s Dungeons and Dragons collective, headed up by charismatic Dungeon-master Eddie (Joseph Quinn), while Lucas (Caleb McLaughlin) tries his hand at popularity as the basketball team’s most dedicated benchwarmer. Max (Sadie Sink), who ended Season 3 as a beloved member of their group, has since retreated into her own grief and confusion over the gory death of her brother Billy (Dacre Montgomery). If anyone’s at all consistent, it’s the older teens; Nancy (Natalia Dyer) has taken her skills to the school newspaper, while Robin (Maya Hawke) rambles about her forbidden crush on a girl to her coworker and best friend, Steve (Joe Keery). Oh, and Hopper (David Harbour) is somewhere in the Soviet Union, presumed dead but very much alive and more miserable than ever.

With all these characters to track, “Stranger Things” certainly does have its work out for it, and mostly manages to keep everything moving at a steady enough clip once it establishes the four or so subplots that end up defining the season. The problem is that pretty much every plot (except for Eleven continuing to explore her origin story) gets less compelling the further they get from Hawkins.

For example: the California escapades run out of steam with every tired weed joke, and continue to waste Schapp’s skill at conveying Will’s tenderest pain with a single glance. Ryder ends up siloed in a zany side mission with Brett Gelman’s manic Murray, which does little for either actor. And with all due respect to Harbour, whose depiction of an alternately snarling and sympathetic man remains one of the show’s best performances, just about every cut to Hopper is a drag. (Unfortunately, this season does nothing to justify the decision to keep this character alive after his stunning sacrifice at the end of Season 3. Let characters other than Barb and randos die, “Stranger Things”!) As every episode creeps further past the hour mark, it gets harder and harder not to resent these threads for sucking up so much time.

Whenever “Stranger Things” does go back to Hawkins and what it does best, though, it’s easier to forgive some detours. Max’s pain gives Sink plenty to, uh, sink her teeth into, especially in the episode dedicated to her trying to face it head-on. An eventual team-up between Robin, Steve, and Nancy brings out the best in all three actors, especially as Dyer’s spiky determination balances out Hawke and Keery’s breezy rapport. And now that the show’s beginning its descent into its final season, it’s also smart to not just have the rest of the town finally hit its limit with all these mysterious deaths, but prove all too susceptible to the very real Satanic Panic of the era.

It helps, too, that the new Hawkins beast — which Dustin accurately calls out as a Freddy Krueger facsimile — feels more tactile and viscerally frightening as he preys on teen trauma. The so-called “Vecna” does have a (very cool) explanation, but before that, it’s also just an effectively creepy monster of the week that brings new undead life to the Upside-Down. In fact, for as interesting as the eventual reveals are, it’s downright jarring to realize that there’s going to be a whole other season beyond the second part of Season 4. The way Vecna ties into the rest of the series makes it hard to imagine how much more juice the series could squeeze from it — but of course, mining as much material from this one property as possible is now as much the point of “Stranger Things” as anything else.