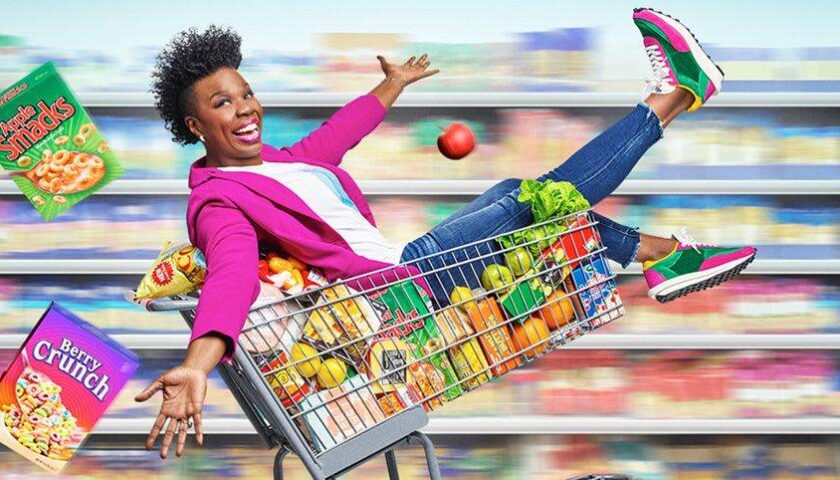 Reruns of the 1990-95 version of Supermarket Sweep have been burning up social media since they debuted on Netflix a few months ago, but the history of the grocery shopping game show goes back a quarter-century before that. The original version, with rules similar to what you see now, ran on ABC from 1965-67; it was actually shot in a supermarket. The ’90-95 version, which aired on Lifetime, and the revival from 2000-03, which aired on the now-defunct PAX, were both hosted by David Ruprecht; they turned a soundstage into a supermarket and were both revered for their low-budget thrills. The show has been revived on ABC, spruced up a bit and with a new host: the always-high-energy Leslie Jones. And the grand prize is now $100,000.

With “Push It” playing in the background, Leslie Jones runs out onto the supermarket set of Supermarket Sweep.

The Gist: Yes, it’s a new version of Supermarket Sweep, the game show where people have to “sweep” through a supermarket to fill their carts for a chance to win a bundle of money. This version is hosted by former SNL cast member Leslie Jones, who was a fan of the version that was on various cable networks in the early 1990s and again in the early 2000s; she even tried out to be a contestant on the PAX version. She even calls out David Ruprecht, the host of the ’90s and ’00s edition.

The gameplay is similar to those older versions of the show. Three teams of two friends and/or relatives compete to add time to the sweep that will determine if they’re going to do the “big sweep” for a potential prize of $100,000. First there’s a “mini-sweep,” where one member of each team tries to find a product that they guess from a rhyming puzzle. Then there’s a round where players buzz in to answer questions and gain time. It could be a “swipe right” quiz where the contestants have to guess the product mascot from a dating profile. Or it could be a quiz where logos are filled in one element at a time and people have to guess. Then there’s a round-robin where the team members switch off in a rapid-fire question round.

Next is the sweep. With whatever time they have accumulated, a member of each sweatshirt-clad team has to sprint through the store and fill his or her carts with as much expensive stuff as they can (think meat, small appliances, diapers), keeping an eye out for inflatables that carry bonuses, items from Leslie’s “shopping list”, golden cans, and other chances for bonus money. In the first episode, a bonus comes from getting flowers from the florist, who’s intentionally slow. One shopper was so impatient, she yells, “Gimme the roses, Richard!”

If you watch the reruns of the Ruprecht versions of Supermarket Sweep on BUZZR or Netflix, you’ll notice a few things: The fact that everyone changes into colorful sweaters with fake collars for the sweep round, and that the money at stake is quite low, even by ’90s standards. If you win the bonus round in those versions, your team got the princely sum of $5,000. We were wondering if increasing the top prize 20-fold would fundamentally change what is essentially an endearing, low-budget esthetic.

We’re happy to say that the new version of Supermarket Sweep doesn’t try to dress up what’s essentially a pretty straightforward game show. Jones is an enthusiastic host, as you’d expect, encouraging the contestants, dropping one-liners and doing funny play-by-play as people scramble to load their carts. The quizzes that help the teams accumulate time have been updated for 2020, but are still the product-placement-laden slices of pure cheese that the Ruprecht versions had. The set is a bit bigger (there’s more room due to the fact that there isn’t an audience for the show, which started shooting over the summer), with some mood lighting, but it still mostly emulates the brightly-lit stores you hate spending time in.

And the sweaters? Well, they’re still there, but there’s no fake collars and every team got a chance to customize their shirts before coming to the set. One team added fringe to the sleeves of their green shirts, another added ruffle-y puffs to their pink get-ups. It’s a nice modern update to that.

The only quibble we have is that the two additional questions in the bonus round slow things down, because the contestants stand there and discuss risking the money for what seems like forever before deciding. It’s something that ABC likes to do, playing the “human element” of a show up, so there’s a storyline instead of just two people going for cash. Of the two shows stitched together to form the first hour, the second one moved better, so maybe the producers have figured out how to speed things up. We really don’t need the discussion part; believe us, we’ll pump our fists if the people win the 100 grand, whether we know anything about them or not.