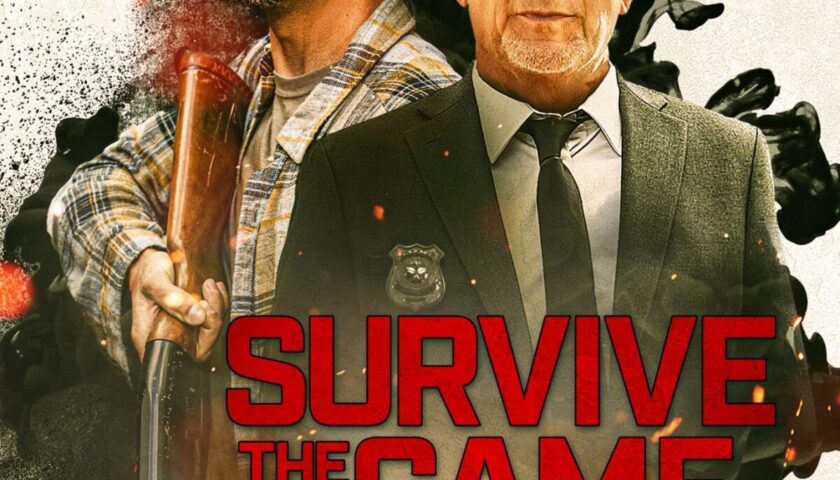 When cop David is injured in a drug bust gone wrong, his partner Cal chases the two criminals who shot him. They all land at a remote farm owned by troubled vet Eric, and as Cal and Eric plot their defense, more of the gang arrives – along with a wounded David. Outnumbered, the three heroes must use stealth, smarts, and good shooting to take down the drug-dealing mob.

At this point, I’m conditioned to expect very little from the plot of anything “starring” Bruce Willis (once again, it’s somewhat false advertising to promote him that way, although not as bad as some of his recent appearances). Enter Survive the Game courtesy of director James Cullen Bressack and writer Ross Peacock (the latter of which is making his debut for a full-length feature), which has no plot beyond a drug bust gone awry that pits a pair of detectives and a grieving former military veteran against the criminals. Other than a few expository details about one or two characters, that’s it.

If that little synopsis sounds similar, that’s probably because Bruce Willis and Chad Michael Murray have already teamed up for a similar flick; last year’s Survive the Night. And while I have not seen that movie, looking at the copy-and-paste posters for both movies alone is enough to tell that no one is trying to do anything distinct or exciting here. Equally telling is how many more projects these two have lined up working with one another.

Anyway, the initial bust leaves Bruce Willis’ David with a gunshot wound (while such a thing what the fallen from grace action behemoth is par for the course these days, at least his character doesn’t randomly walk out of the story in this one), leaving his partner Cal (Swen Temmel) in pursuit of the assailants. They include vile couple Mickey and Violet (Zack Ward and Kate Katzman). The latter essentially cosplays Harley Quinn, presumably because nothing on the page gives these characters any semblance of personality. She’s not the only one either, as another henchmen rocks a mohawk and green jacket attempting to pass himself off as Robert De Niro in Taxi Driver. Whether any of this is supposed to be amusing or not is anyone’s guess, but the shameless cosplaying is more entertaining than just about everything else going on.

Aside from that, Survive the Game is a slog that constantly sees characters making threats or repositioning themselves around the farmhouse everyone ends up at, planning their next attack. The house belongs to Chad Michael Murray’s Eric, dead inside from a recent car accident that took the life of his wife and daughter. As a result, once all this mayhem shows up at his door, he is not really concerned with living or dying, just protecting the home (the only thing he has left) and helping out Cal.

With over ten violent criminals to contend with, Survive the Game offers up a whole lot of repetition, but in its defense, the amount of shooting and fighting it does throw at the screen is preferred to watching any of these characters engage in dialogue. Whenever that’s happening, surviving is more about not falling asleep watching. A hand-to-hand fight shot from inside a car with another character unconscious also shows that James Cullen Bressack occasionally wants to shoot sequences creatively. And even Bruce Willis, while still phoning in an embarrassing lazy performance, is marginally involved in the chaos. It’s still a waste of time, but not the worst Bruce Willis movie of 2021, which, I suppose, is something to be grateful for. Not even a drinking game is reason enough to attempt surviving Survive the Game.