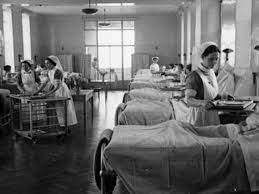 IN A NUTSHELL: “Syndrome K” is the second documentary film from filmmaker Stephen Edwards’ (acclaimed composer of “Requiem for My Mother”, and musical contributor to award-winning films such as “Nomadland”, and “Dallas Buyer’s Club”).

“Syndrome K” is the true story about a highly contagious, highly fictitious disease created by three Roman Catholic doctors – Adriano Ossicini, Giovanni Borromeo, & Vittorio Sacradoti, during the Holocaust to hide Jews from Occupying Nazis in a Vatican-affiliated hospital during World War II. When over 1,000 Jews from the Jewish Ghetto in Rome were deported to Auschwitz on 16 October 1943, many other Jews sought refuge in the Fatebenefratelli Hospital, directly across the Tiber River from the Ghetto, and Syndrome K became a way to save them.

THINGS I LIKED: It was really great to hear Ray Liotta’s voice as the narrator one last time. He unexpectedly passed away in his sleep just recently on May 26, 2022.

Despite the somber topic of the Holocaust during World War II, this fascinating documentary presents an energetic telling and leaves you feeling hopeful and inspired. Powerful and impactful documentaries are those that speak about ordinary people doing extraordinary things, “Syndrome K” is one of those documentaries.

The film utilizes incredible footage and photos of the time, as well as interviews, reenactments, and even animation.

I absolutely adore Italy and have been there several times. I loved seeing the old and current photos of the amazing city.

The film is incredibly engaging due to the topic but especially because of the quick scene changes and visual effects. It never felt like a boring documentary at all, and the time flew by very fast!

THINGS I DIDN’T LIKE: Nothing! It was very well done!