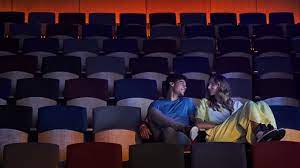 Jodi (Ava Michelle) is finally figuring it all out. She’s learning to love her height, happy with her best-friend-turned-boyfriend Dunks (Griffin Gluck), and even brave enough to audition for her school’s production of Bye Bye Birdie. She’s forgiven Stig (Luke Eisner) for his sins against her, and she wears BFF Fareeda’s (Anjelika Washington) designs around school. When she’s cast as the lead in the musical and starts getting attention from other boys, however, Jodi struggles to shut down the negative voice inside her head, afraid she’s going to blow up her life. And in a way, she does; after a botched anniversary dinner, she pushes Dunks to break up with her, and the two head down an uncomfortable path as they wonder if they made the wrong decision.

As rehearsals progress and her friend group deals with their respective issues, Jodi’s anxieties mount; she can’t quite face the fact that her sister Harper (Sabrina Carpenter) is moving to Los Angeles, she can’t get Dunks to talk to her, and the idea of actually getting on stage even as her bully Kimmy (Clara Wilsey) tries to psych her out becomes more and more daunting. What does the future hold? Will she ever be able to truly trust herself? With the help of her support system and finding the kind, confident voice inside herself, however, she may very well make it through after all.

Tall Girl is silly. It always has been. There’s a little bit of charm present due to the strength of the cast, but the writing is shallow, presenting us with undeveloped friends and a one-note mean girl. The sequel feels entirely unnecessary, especially given the totally forgettable nature of the first installment. At the beginning, Jodi had no real personality beyond her insecurity, slouching through the hallways with a sullen look on her face and hoping that no one would notice her. In Tall Girl 2, she’s once again not given much to do besides figure out which boy she wants to date and learn to silence the negative voice inside her head. Griffin Gluck, so damn funny in American Vandal, does his best to elevate a shoddy script, but short king Dunks somehow falls into the grating nice guy trope this time around, and it sucks. Jodi’s friends – Fareeda in particular – who were previously relegated to the sidelines, do get a bit more to do here without simply waiting to cheer on Jodi, which is a welcome changeup. Unfortunately, however, the plot of Tall Girl 2 feels all over the place and confused, existing in a world of sexless, stake-less sweetness that expects us to care deeply about a character so self-absorbed that she can’t notice what’s happening in the lives of anyone around her.