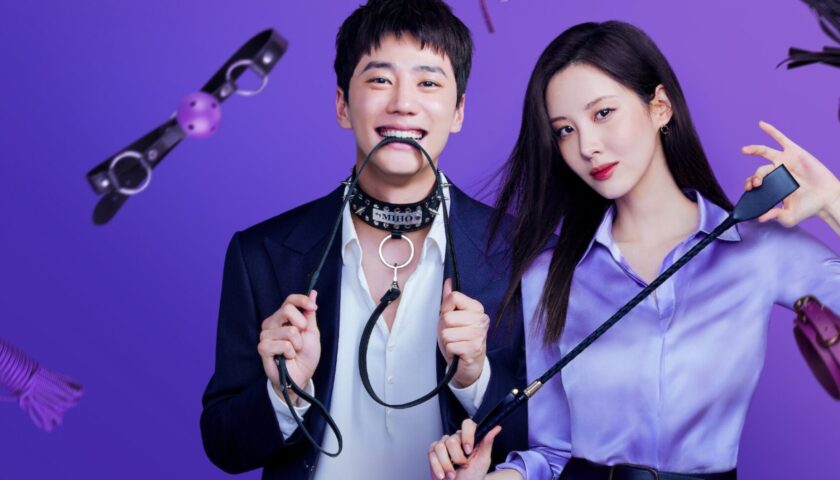 Based on the webcomic Moral Sense, the film begins as Jung Ji-woo (played by Seohyun) comes across an unfamiliar face in the office, who is later revealed to be a new transfer from the company’s business department. His name is Jung Ji-hoo (former UKISS and UNB member Lee Jun-young); the uncanny similarities between their names – there’s only a singular letter separating them – elicit amusement from their co-workers, who point out the likelihood of misidentification in the future.

Like clockwork, said confusion happens almost immediately: a mysterious parcel addressed to Ji-hoo is mistakenly delivered to Ji-woo’s desk, who opens it to find a curious spiked collar. Ji-hoo is thrown into a frenzied state by the mere sight of Ji-woo discovering the contents of his parcel, and tries his best to play it off by explaining that it’s for his (fictional) three-year-old poodle. He fails miserably, of course – Ji-woo’s unfazed disposition allows her to spot the cracks in his pretense. The rest is history: the wild whirlwind of a raunchy new relationship begins between the two colleagues, who engage in a contractual dominant and submissive (D&S) relationship soon thereafter.

For instance, while Ji-hoo does develop a desire for Ji-woo to enter a D&S dynamic with him as her submissive, he’s careful not to push or pressure her into engaging in things she may not feel comfortable with. Likewise, Ji-woo takes the time and effort to understand her feelings and what the relationship would entail, thoroughly researching the concept and establishing a contract that emphasises consent from both parties involved.

The delicate expression of its subject matter is delivered best through its educational aspects, executed to near perfection by director and writer Park Hyeon-jin. She allows viewers to take away at least some information about the oft-misconstrued sexual dynamic, which is already a win for the film.

The only thing that leaves us wanting more is the on-screen chemistry between Seohyun and Lee, which at times fails to justify the magnetic, nearly inextricable relationship they’re trying to depict. Certain high-tension scenes come off as awkward, while some others make them look like amicable friends at best. The film itself could also benefit from better pacing, as it suffers from unnecessarily long-drawn events that leave space for viewers to grow disinterested, particularly in its second act.