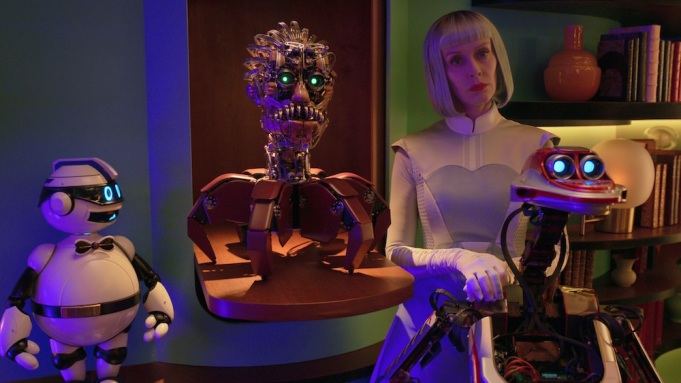 Machines might seem an antithetical thing to get sentimental about, but in Jean-Pierre Jeunet’s view of them as imperfect, quirk-prone and funny, they’re pretty much human. The film-maker cobbles together off-kilter worlds where everything is mechanized yet nothing works properly, daily life turned into an absurd burlesque of glitches, miscommunications, system errors and sound-the-alarm snafus. In early-career triumphs like Delicatessen or The City of Lost Children, Jeunet assembled Rube Goldberg contraptions with such fastidious personal care that they couldn’t help but be imbued with the idiosyncrasies of their creator. Sometimes, he’ll apply this notion in a more figurative way to satirize the catch-22-clogged French bureaucracy, a giant engine seemingly built to malfunction. He gets in one or two such cracks with his latest film Bigbug, in which fees incur fees that incur fees. Mostly, however, he’s concerned about actual robots.

Technology takes the explicit focus of Jeunet’s literally screw-loose new comedy, now landing on Netflix (with a dearth of fanfare, surprising for the director behind one of the highest-grossing foreign-language releases in the history of American moviegoing). The streaming platform is an ironic place for a film so wary of the “internet of things” to end up, though it’s caught between the digital and analog on a few concurrent levels. The action has been confined to a home full of hinky practical-effect androids, wedged in a prefab neighborhood of little-box CGI conformity. A revolution among next-gen automatons raging outside traps a collection of homo sapiens there, mismatched caricatures befitting the broad sex farce inexplicably jammed in the middle of this commentary on AI run amok. Between klutzy ploys to get into each other’s pants, the organic life forms collude with the cruder household bots they have come to consider family to beat back the real menace: the charmless homogeneity of smart-tech.

Something’s not right with the ubiquitous off-brand Robocops cheekily dubbed Yonyx (François Levantal), their forehead QR-code tattoos and oversized fake teeth unsettling even before they rise up in a coup d’etat. They are polished to the point of untrustworthiness; fittingly, one of their kind gains traction as a fringe politician. This dash of background color plays on a television in the home of Alice (Elsa Zylberstein), which is kept in order by a short circuit-looking vacuum, a talking bust of Albert Einstein that walks on animatronic spider legs and the bob-haired electro-maid Monique (Claude Perron). They’re three of the good ones, friendly and helpful when not on the fritz, somewhere between nanny and pet for Alice and daughter Nina (Marysole Fertard). Most importantly, they’re cool with servitude, garbling any class-based allegories in favor of a loftier ontological journey to learn what it means to be human.

Their joint quest to become a real boy/girl/vacuum often plays like the B-plot to the goings-on with Alice’s many guests. We’ve got a sleazy suitor (Stephane de Groodt) and his surly teen son (Hélie Thonnat), her loutish ex-husband (Youssef Hajdi) and his trophy girlfriend (Claire Chust), her aging neighbor (Isabelle Nanty) and the obsolete hunk (Alban Lenoir) she’s programmed to love her. Locked indoors until the threat level beyond their impregnable walls sinks to an acceptable number, they moon over one another with serviceable bawdy humor that only briefly veers into that distinctly Gallic brand of shrillness. A running gag involving the Kama Sutra provides a helpful reminder that the national perception of the French as highbrow sophisticates does not account for their studio comedies.

Thinking beyond the containment of his chamber-piece setup, Jeunet indulges in some universe-building that takes his signature combination of the morbid and silly to a brighter, peppier register. In the teal retro-futurist kitchen, Monique shakes nutritious crickets out of a box like cereal, and on the TV, the show “Homo Ridiculus” subjects humans to humiliating scenarios for the amusement of the Yonyx. Outside the window, roving drones blare advertisements personalized to the rapidly deteriorating state of society. The tone stays light even as the incoming tide of robo-fascism worsens to book-burning, but the bleak details of dystopia are always rapping at the door.

Whether it’s the scenery or the cybernetic characters, Jeunet takes far more interest in things than the people he leaves as thin archetypal sketches. Lest this be mistaken for coldness, he locates the film’s soul in those searching for one, the quirkier robots treated with more affection than their mass-produced counterparts goose-stepping out of Silicon Valley. With his work now migrating online and his jerry-rigged methods increasingly outsourced to post-production effects, Jeunet can’t avoid the impending digitization of cinema, nor life. Still, he’s not going down without landing a few good fingers to the ribs first.

Bigbug is now available on Netflix.