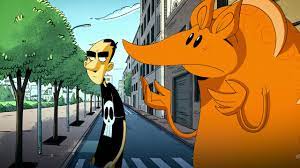 Zero (Zerocalcare, pen name for comic artist Michele Reche) is a comic artist in Rome who, at 37, more or less has existential angst about every decision he’s ever made in the past, is making now, or will make in the future. He recounts meeting his friend Alice for the first time (Zerocale does every voice except one); it was 2001 and they were both 17. He was trying to play it cool, so when his other friend Sarah introduced them to each other at a rock show, he barely spoke to her.

They seemed to hit it off, but in person they only exchanged variations on whether they smoke or not. But on MSN, “WhatsApp’s rustic ancestor,” the two chatted away during all hours of the day and night. Why didn’t they develop a more intimate relationship? Because his conscious, which he sees in the form of a giant armadillo (Valerio Mastandrea), keeps telling him to talk in vague terms and not let on how he feels.

After this reminiscence, he meets his friend Sarah, who tells him to change into his jeans. After a stressed diatribe about how filthy the men’s room is compared to what he imagines the ladies’ room is, Sarah counters that with her own horrible squatting narrative. He then puts on his pants in the men’s room, after they’ve fallen on the piss-soaked floor.

Tear Along The Dotted Line is a silly, sometimes surreal and often funny take on a guy who lives so carefully that his life has been stagnant since he was a teenager. What we appreciated about the show was that, despite a language barrier and some overt visual clutter in the animation, we found ourselves laughing more often than not.

In each 15-20 minute episode, Zerocalcare weaves a tale from his youth, often involving Alice, Sarah or his other friend Secco. The reason why he’s voicing all of the characters is that he’s telling the tale to the audience, complete with a rundown of his inadequacies, mostly fueled by the armadillo that’s constantly over his shoulder. We first see it when he’s 11, wondering if his teacher is disappointed in him because he doesn’t understand fractions and long division. Sarah sets him straight, calling Zero a blade of grass in the lawn that is his teacher’s long career. The teacher even calls him the name of a similarly-monikered classmate.

Then, the last few minutes of each episode continues the current story. It’s usually those segments that are the funnier ones in each episode. For instance, in episode 2, he agonizes over the fact that he can’t fix a flat tire, showing that working on cars is part of his “man handbook” (with a crudely-drawn penis on the cover, of course). But, because he’s Italian, he sees no problem with calling his mother to fix it, no matter how infantilizing it seems.

We think we find this stuff funnier because it’s more current, more of a Curb Your Enthusiasm-style recitation of Zero’s current grievances rather than a recall of past failures.

Still, it’s a piecemeal accounting, with a promise that all will come together at the end of the 6-episode season. Is it worth sitting through the six episodes, totaling less than two hours, to get to that conclusion? We think so, mainly because there are so many funny moments along the way.