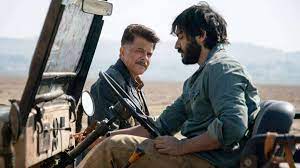 The story plays largely in two tracks. One where a senior cop is trying to investigate mysterious murders in a Rajasthan village. Another where a young stranger comes to the same village with his secret motives. Early on the viewer gets to know who the murderer is. So predictability seeps in pretty early in the plot. Also with the gruesomeness in his torture tactics, his motive also becomes quite apparent. So there isn’t much to hold your attention in the storytelling. Then there is a dacoit track which is completely alien to the main plot and has no relevance in the end.

To give it due credit, the film is amazingly shot in the barren lands of Rajasthan. Wish the same honesty and effort was shown in telling a novel story.

Anil Kapoor fits perfectly in his cop character and is the hope you latch on to till the end. Harshwardhan plays a typical man-of-few-words and no-nonsense character. He does good with showing little emotions in his deadpan looking character. Satish Kaushik is delightful until his character gets eliminated randomly. The very talented Jeetendra Joshi has little to do here other than scream to the torture. Sana adds raw sex-appeal in her village belle character. Mukti Mohan is wasted. So is Rahul Singh.

Thar ends up being a conventional revenge drama leaving you high and dry.