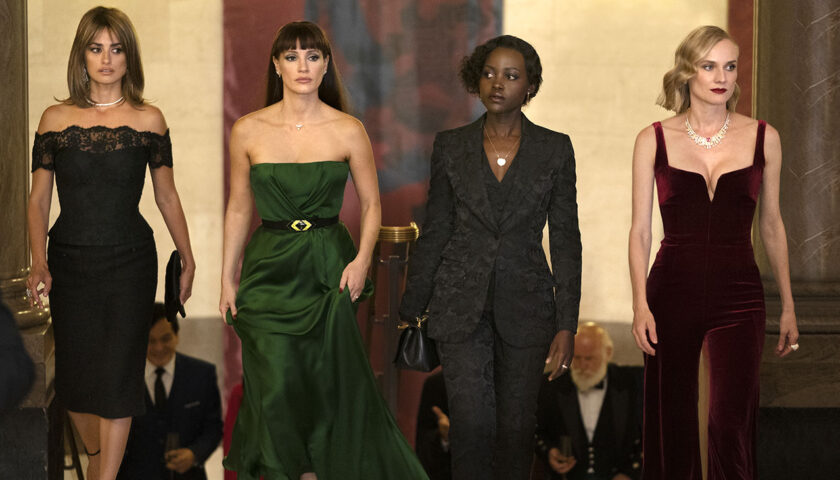 It’s not usually a good idea to grade a movie on the curve of when it’s released. But in the case of “The 355,” one is tempted to make an exception and say: For a first-week-of-January thriller, it isn’t bad. Early January tends to be a dumping ground, because the prestige awards contenders are still opening wide; it’s when you’ll get a shark drama that’s too lousy to be a trashy summer movie. But “The 355” is a vigorous formula action spy flick with an out-of-the-frying-pan-into-the-fire plot that mostly holds your attention, periodically revs the senses, and gives its actors just enough to work with to put a basic feminine spin on the genre. I make a point of that because the film does too.

The heroines are a quartet of espionage veterans who come from different countries but share a certain rogue mystique. Mace (Jessica Chastain), who works for the CIA, is assigned to retrieve a data-key drive that can do anything (blow up a plane in midair, penetrate any closed computer system) and is therefore ripe to be stolen by an international band of criminal entrepreneurs. In Paris, where she’s supposed to pick up the drive from a Colombian mercenary (Édgar Ramirez), she’s accompanied by her long-time agent colleague, Nick (Sebastian Stan), who suggests that they shore up their undercover identities as honeymooning rubes by actually becoming a couple. To our surprise, Mace agrees — but thanks to the monkey wrench thrown into their plan by Marie (Diane Kruger), a rival German BND agent, the union doesn’t last.

For a while, Mace and Marie square off like the edgy renegades they are. But they’re soon joined by two fellow agents: Khadijah (Lupita Nyong’o), a semi-retired MI6 operative who works on the cutting edge of cyber-espionage, and Graciela (Penélope Cruz), the group’s token soft case, a Colombian DNI agent who’s really a psychologist who specializes in treating the trauma of her fellow agents.

The four join forces to hunt down the drive, a countdown-to-the-apocalypse-with-MacGuffin plot speckled with well-staged overwrought action. These ace operatives have been trained to do it all: windpipe-bashing combat, existential chases through the crowded squares of Morocco, drop-of-the-hat surveillance and, of course, flaunting an attitude of utilitarian iciness that’s a match for any male movie spy. The element that comes closest to giving the film a personality is that most of them aren’t satisfied with the lone-wolf bravado that comes of being an international woman of mystery. Their view seems to be: We’ve got the moves like Bond, but sociopathic isolation is for suckers.

As action storytelling, “The 355” is generic, over-the-top, and 20 minutes too long, kind of like a Netflix movie. But it’s the well-made version of that corporate brew. Chastain has recently been showing a lighter side; her performance in “The Eyes of Tammy Faye” has an operatic playfulness, and in “The 355,” which she’s one of the producers of, you can feel the pleasure she takes in letting her hair down and biting into the role of haughty action heroine. Kruger has the moxie to play Marie as a standoffish neurotic, Nyong’o creates an unusually emotional hacker, and Cruz, as the one who’s more devoted to her family than to global realpolitik, proves the sweetest of wild cards. The less revealed about what happens to Sebastian Stan’s Nick the better, though he plays it with a baby-faced malice that’s hard to resist.

In the second half, the director, Simon Kinberg (“X-Men: Dark Phoenix”), takes his heroines to Shanghai, where they have to retrieve the drive from an art auction that’s a cover for a dark-web bidding war, which makes the film feel a bit like a heist thriller. So does the arrival of Bingbing Fan as a Chinese undercover agent who joins the team. But no “Ocean’s” sequel ever had this much machine-gun battle. Kinberg pads the film out with what some might call bravura action scenes, but while they’re tightly choreographed and edited, the fact that we haven’t seen women go through these paces nearly as often as men doesn’t make the scenes any less heavy (or noisy) in their bombast. The idea, of course, is that the action is going to sell the movie. But you have to wonder: If “The 355,” named for an anonymous female agent during the time of the American Revolution, were closer to a movie like “Widows,” which it sometimes resembles, and further from an “Expendables” sequel, it might actually have been more commercial. A January movie doesn’t need to give us too much of an okay thing.