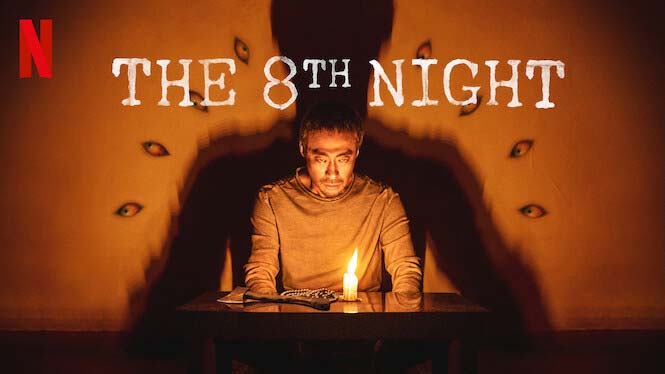 The 8th Night (Netflix) draws on contemporary Korean horror for a few scary kids doing scary things and assorted other evil-scarred humans, but it largely keeps the blatant gore at bay in favor of a foreboding mystery air, full of ancient doomsaying and those tortured souls destined to protect humanity from utter destruction.

2,500 years ago, a monster started opening the door that bridges the human realm to Hell, in order to make humans suffer.” As this introductory sequence of The 8th Night continues, we learn that Buddha stepped in to save humankind from what this monster wrought, and though its two eyes escaped  — one black, one red — The Enlightened One ended up collecting them and placing each in a sarira casket, one to the west and the desert plains, the other to the east and the jagged mountain peaks. No one would ever find these implements of evil in those places, right? Wrong! In 2005, an anthropologist, Professor Kim Joon-cheoi (Choi Jin-ho) unearths one of the caskets in the shifting sands of the India-Pakistan border. (He thrusts it aloft to be silhouetted against the sun in a reference to The Exorcist films.) Kim is driven mad by his discovery, and when we meet him again in 2020, he’s a mumbling mess of dementia and preparing to perform some kind of blood sacrifice. “Now, the door to Hell will open!” Finally, right? Jeez.

The once-in-a-lifetime instance of a super blood moon alerts an aged, dying monk named Hajeong that Kim’s ritualistic antics have set the return of the monster into motion. Hejeong, keeper of the other sarira casket, entrusts his young novitiate Cheon-seok (Nam Da-reum) with the relic, and tasks him with locating Seonhwa, aka Park Jin-soo (Lee Sung-min), a man with a tortured past who trained with the monks, only to return to society. He’s still tortured, though, and hears Hejeong talking to him. “I see that there are countless souls on your back, waiting to ascend.” Park knows it’s his duty to defend humanity from the monster, but he’s racked with guilt and anger. Still, when Cheon-seok locates him, he knows he has to do it. Park gathers up his rosary beads, and he buys a hatchet.

The monster, meanwhile, having been unleashed, is gaining strength with each mortal it kills. Detective Kim Ho-tae (Park Hae-joon) can’t make heads or tails of the murders, which leave behind shriveled and grotesque husks of what were once people. But this born skeptic does know how annoying it is when his trusty underling Dong-Jin gives him a talisman and muses over how shamanistic the killings are. As the days tick by, each established with another on screen graphic, Park and Cheon-seok make their way to the mountainous crags outside Gwangju city, pursued by Detective Kim. If that door to Hell is really opening, Kim and his sidekick are going to be there to try and exorcise the demon.

With its tosses to previous forays into the exorcism genre and a steady rudder that guides the intrigue all the way to its inevitable evil versus good showdown, The 8th Night is a solidly-made, slow-burn chiller that gets a lot of mileage out of ancient prophecies and ghosts traveling in the margins. Ultimately, however, this story is about individual human fate, and the cloud of uncertainty that seeps into and out of the inevitability that is each of our fate. “They were all alive because they couldn’t die,” the shaman tells Detective Park of the handful of lost souls unfortunate enough to connect with the deranged Professor Kim. “They were hanging by a thread.” For Park, the tortured former monk-in-training, his spiritual burden weighs on him like a blacksmith’s anvil. His soul is more dead than his corporeal self, but they both come to life when he determines that closing the door to hell truly is his only chance at redemption, just like Hajeong predicted. Even Detective Kim gets a dose of how heavy the spirit world can get in the end, and has to acknowledge that not everything is as cut and dry as police tape and a coroner’s report. The 8th Night revels in this alignment of what’s beyond with what’s right here in the everyday, and even if it trades in big scares and jump scenes for that notion, what’s left is suitably creepy, and decidedly watchable.

STREAM IT. A different film might fling the door to Hell open with a little more flair, but The 8th Night still drives at its central conceit with subtle notes of character and spirit world mystery.