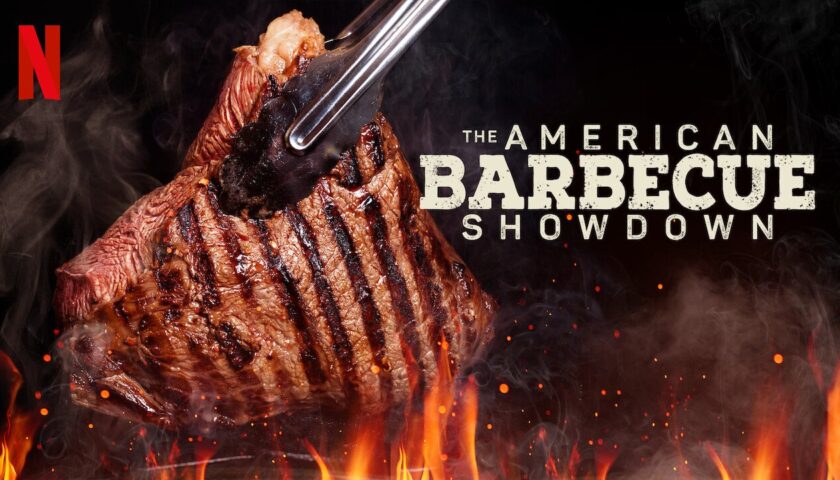 The show’s two hosts – comedian Lyric Lewis and Floor Is Lava host Rutledge Wood — and two judges — Kevin Bludso and Melissa Cookston — come out of the barn/pantry as the eight pitmaster contestants get their smokers ready.

The American Barbecue Showdown consists of eight challenges, where pitmasters are given tasks that are designed to shake them out of their barbecue comfort zones as well as allow them to tell their story via their ‘cue. As both award-winning judges say, they want to taste the story of your influences, family, etc, in the smoke and spices that you use.

The eight contestants are from all of the barbecue meccas of the country — the Carolinas, Texas, Georgia, Missouri, and elsewhere — applying recipes that have been handed down for generations. In the first challenge, the pitmasters are tasked with making a classic combo platter, with two proteins and two sides. And they’re only given five and a half hours to do it.

It sounds like that’s a lot of time, but in the world of low-and-slow, five-and-a-half-hours is a speed round. One of the contestants, Tina Cannon, questions the time, given the fact that she takes seven-to-twelve hours to smoke her meat. But everyone steps up to the challenge, some making pork butt (did you know that it’s really the pig’s shoulder?) One contestant, Michael “Shotgun” Collins, makes a personal favorite of ours: Beer can chicken, where the contents of a pierced beer can, stuffed into the chicken, slowly bastes it from the inside. One contestant, nicknamed “Grubbs”, smokes homemade sausage on a cedar plank, an unusual move.

About 90 minutes before the end of the contest, the pitmasters are thrown a “mid-smoke challenge”: Make a bread to go with the combo plate. It could be biscuits, cornbread, or anything else the teams had in mind. One contestant, Rasheed Phillips, who has never been in competition before, makes a simple pan-baked butter biscuit — and something else as a backup.

After the judges have a taste of all the combo platters, one pitmaster wins the challenge, and another is sent home.

For sure, like in most cooking competition shows, some contestants got more attention than others. How could the cameras not focus on Shotgun, complete with Mohawk and the notion that he cooks better when he’s drinking? He was all over the place with his smokers, something that damn near offended Cookston as she watched him in action. We also heard a lot from Tina, who seemed to make excuses all the way through the challenge, and Rasheed, who really brought his Jamaican and Latin background to the challenge. He also managed to make four proteins and more than two sides and nail all of them, which is amazing given he never competed before.

Of course we want to hear the stories behind the recipes, but we’re also excited to see challenges where they’re given game meat like racoon to cook (We bet Grubbs, who calls his cooking “Grubbacue”, will excel at that if he’s still around). We want to see the ribs, the burnt ends, the brisket, pork belly, sausages, etc. And we also want to see how people do less-traditional barbecue like cedar plank salmon, like Sylvie Curry did in the first challenge.

One thing we know we’re going to do is make sure we eat well before watching each episode, because the first one sure made us hungry.