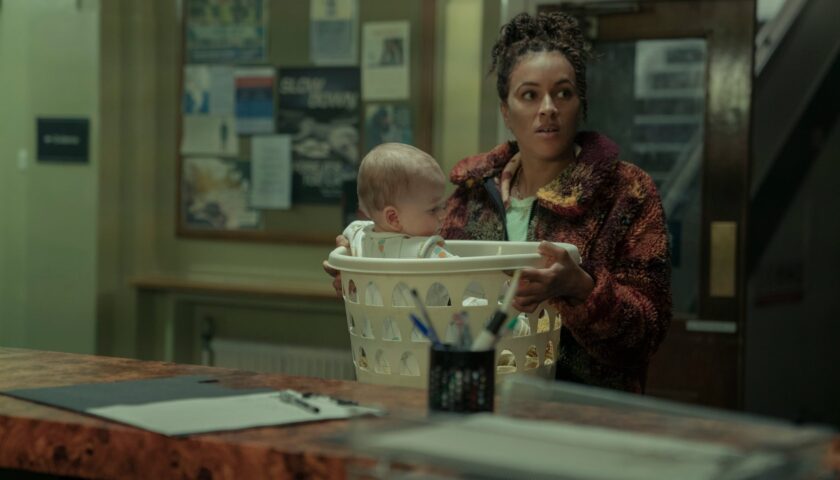 Motherhood — specifically early motherhood — is hell. It’s a concept that’s been depicted plenty of times in film and television over the decades, yet it still manages to be a topic rife with material for more. HBO’s new horror-comedy “The Baby” is the latest offering into that particular canon. As one character in “The Baby” explains, when it comes to raising a baby, “Well, no one really gets it, do they? Not unless they’re in it. In the house all day, no one to talk to. Scream, nap, eat, shit, repeat. It’s a lot.” This is after another character asks the lead whether she’s started hallucinating yet. No, not any of the expected supernatural hallucinations, but the typical motherhood hallucinations of killing your child for a little peace for once.

Naturally, as a horror-comedy, “The Baby” takes the motherhood-as-hell concept and stretches it out to be as literal as it possibly can. In fact, pretty much any and all subtext about the struggles of motherhood becomes text with “The Baby,” as the idea of a baby consuming a mother’s life and shutting them out from the rest of the world ends up being the titular baby’s single underhanded goal. Created by Lucy Gaymer and Siân Robins-Grace, the British limited series follows the single Natasha (Michelle de Swarte), a 38-year-old woman who has grown frustrated with the fact that her best friends have essentially lost their personhood to motherhood. After the announcement of another impending pregnancy in her group of friends, Natasha tries to get her head straight at an upsettingly remote beachside cabin, only to end up with a baby (Albie Pascal Hills and Arthur Levi Hills) landing right in her arms. Natasha quickly tries to get rid of the baby, but it soon becomes clear that even if she doesn’t want the baby, the baby wants her. And it will remove any and every obstacle in its path to have her all to himself.

For Natasha, the very idea of having a child — of motherhood, in general — is nightmare fuel enough. “The Baby,” however, doesn’t just rely on that fact as the source of both its horror and comedy; throughout the course of its eight episodes, the series specifically challenges the horrors (less comedy, in that realm) of forced motherhood. While “The Baby” is pretty direct about how funny it can be to see someone so reluctant to and clueless about raising children now having to deal with that — as it is pretty funny to see a cute baby sitting in a laundry basket in the backseat of a car, for safety purposes. But the show ultimately understands that there is something fundamentally wrong with and horrific about forcing that on the same type of person — and also expecting them to just “grow into” wanting that type of thing. Natasha’s relationship with the baby, even as she realizes that it’s not to be trusted, is complicated. And it only becomes more complicated the more she hears from a woman known as Mrs. Eaves (Amira Ghazalla), who wants to help her get out of this terrible situation. But considering what the baby wants and what the baby does to get what it wants, there is no simple solution to any of it. Just like there is no simple solution to the broken relationships Natasha ends up having to confront as a result of all of this, both with her younger sister Bobbi (Amber Grappy) — who actually wants a baby more than anything else — and her estranged mother, Barba (Sinéad Cusack) — who abandoned their family 15 years ago.

There is an absurdity to “The Baby” at times when you think about how much of the show hinges on Swarte staring at the baby and the baby staring back at her (or at others, who are generally the baby’s targets). Considering the amount of maneuvering that most likely needed to be done behind the scenes, and the unpredictability of babies in general, it really is worth praising the Hills twins for their work as the titular baby. The series very intentionally went the route of a very adorable baby who seems full of light and joy; though, it does seem that for the baby, joy comes from ruining his “mother’s” life. As Natasha finds herself spiraling over this baby and what it’s doing — from appearing where it shouldn’t to causing brutal injuries and deaths — somehow, the baby only gets cuter. One second the baby is teething on a spatula, and the next it’s revealing some otherworldly ability to cause chaos.

With that absurdity, there’s also definitely an “Saturday Night Live” sketch in the premise of “The Baby,” much like there was in the much-memed, little seen series like “The Slap” before it. But the way the show is put together, from the performances to the score to the direction — which especially works overtime on both sides of the horror-comedy coin — allows for it to work as an effective piece of storytelling instead of a parody. There’s also genuinely enough gnarly violence (without being too gory) to remind the audience that the stakes of all of this are very real, no matter how many sweet cooing sounds the baby makes or how humorous it is to see Natasha attempt to interrogate a baby that’s sitting in the middle of a couch that is far too big for it. (It’s very humorous.) The comedy of the series is the kind that comes out of an uncomfortable or high-stress situation, usually when you’re the only person who realizes that it is an uncomfortable or high-stress situation.

And as for the horror, it comes from a place of old-school horror in its reliance on building suspense and tension, which allows it to range from eerie, a la “Get Out,” to chilling a la “The Birds.” The series premiere was directed by Nicole Kassell, whose resume includes “The Killing,” “The Following,” “The Leftovers,” and “Watchmen” and who establishes the off-kilter visual languages of the series moving forward.. “The Baby” is certainly not afraid to “go there” in terms of who and what it will kill — as it wants there to be no mistake that the baby is genuinely an agent of evil — but the direction is typically smart to either blur the focus or get so up close that it’s never just showing things off for torture porn purposes. There’s an art to it, after all. There’s not too much flash in “The Baby,” but when there is, it’s to make a point about just how dangerous the baby is. And the baby is pretty damn dangerous.