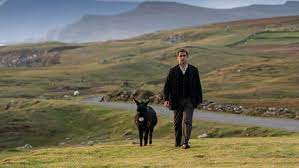 The Banshees of Inisherin 2022 Movie Review

Every afternoon — for as long as anyone on the tiny, fictional Irish isle of Inisherin can remember — two friends have sat together at the only pub in a town for a few pints of Guinness. This shared ritual might be the only thing these men have in common.

Pádraic Súilleabháin (Colin Farrell), the younger of the two, is a sweet and simple type who doesn’t ask for much from life, and gives it exactly that in return. If he died five yards from where he was born, that would suit him just fine. Colm Doherty (Brendan Gleeson) is cut from a more intense cloth. An amateur but obsessive fiddler who’s in his 60s and convinced that he has exactly 12 years left to live, Colm is prone to a certain resentment over the smallness of his existence.

One idyllic day in 1923, as the local birds chirp loud enough for the people of Inisherin to ignore the bombs exploding across the water and a world away, Colm suddenly announces that he won’t be friends with Pádraic anymore. “You didn’t do anything,” the older man insists with the calm demeanor of a doctor offering a diagnosis and its treatment in the same breath. “I just don’t like you no more.”

And so, not six minutes into Martin McDonagh’s deliciously mordant “The Banshees of Inisherin,” the seeds of a new enmity are sown — not a metaphor for the Irish Civil War so much as an absurd kind of microcosm for it. The result is (by far) the writer-director’s best film since his similarly haunted “In Bruges,” which also found the same lead actors trading sublime jabs of existential despair with all the bruised grace of a heavyweight bout. It’s a stirring tragicomedy in which one man’s sympathetic but uncompromising lust for freedom sparks an escalating series of reprisals that can only end in a stalemate or self-immolation. Or both. Or worse.

Unfolding like a gleefully sadistic mirror image of the scene in “Good Will Hunting” when Ben Affleck tells Matt Damon about the best part of his day — one friend encouraging the other to leave their go-nowhere life behind — “The Banshees of Inisherin” watches as Colm’s decision ripples across the kind of small community where conflict tends to be swallowed like communion, and cruelty is only exercised behind closed doors. Which isn’t to say that the people of Inisherin are confused by the breakup. There isn’t a soul in town who hasn’t been bored to tears by Pádraic’s lectures about the contents of his pony’s shite, or who disagrees with Colm’s assessment that the man is an utter bore.

In fact, no one understands Colm’s decision better than Pádraic’s loving sister Siobhán (Kerry Condon), a smart and beautiful single woman whose maternal affection for her only relative has only grown stronger and more self-limiting since their parents died. She’s being deprived of the world beyond their island, and the world is being deprived of her in return. Pádraic might be the sweetest soul on Earth, but his dull kindness can be a bear trap, and watching Siobhán try to wriggle her way free of it soon becomes one of this film’s greatest pleasures (thanks in no small part to the exquisite nuance of Condon’s tender yet fiery supporting performance).

Pádraic’s sudden need for a new pal also has a pronounced effect on the only character more pitiable than himself. The village delinquent — and incidentally also the son of the village cop — Dominic is an unwashed Shakespearean fool of a kid whose impish enthusiasm to share uncomfortable truths only dries up when it comes to his own. Obviously played by Barry Keoghan (who is obviously perfect for the part), Dominic has been discarded by the people of Inisherin with the same callousness that he’s been abused by his dad. He’s the most innocent soul on the island, which also means he’s forced to suffer the brunt of its guilt. But that doesn’t become a factor until long after Colm has started cutting off one of his own fiddle fingers every time Pádraic tries to make amends. It wouldn’t be a Martin McDonagh movie if people didn’t seek peace and/or absolution through cartoonish acts of ultra-violence.

Then again, “The Banshees of Inisherin” often feels more like a Martin McDonagh play — perhaps the abandoned play of the same name that he first conceived as the conclusion of his “Aran Islands Trilogy” — which might help to explain the stony confidence of his direction and the steady focus with which he follows this story to the mournful finale promised by its title (Sheila Flitton is hilarious as banshee incarnate Mrs. McCormick, an old crone so happy to cosplay as death itself that she might as well hobble around Inisherin with a scythe in her hands). If the film never feels the least bit limited by its scope or location, that’s because the Galway Bay lends it an impossibly gorgeous backdrop, replete with rolling green hills and ravishing ocean views on all sides. It’s the perfect fairy tale idyll for the harps and glockenspiels of Carter Burwell’s ominous score to subvert.

Nevertheless, the film’s most crucial terrain is the furrowed triangle of sadness that forms between Farrell’s eyebrows and nose, as the “After Yang” star — once again tapping into the vast sea of quiet dignity that has allowed him to mature into one of the most indivisibly humane screen actors on Earth — finds an infinite spectrum of sadness and confusion within the narrow confines of his “simple” character. As the stand-off between Pádraic and Colm intensifies to greater degrees of comic horror (and the lighthearted “feckin’” is gradually replaced by the harder-edged “fucking”), it becomes a thing of terrible beauty to watch Farrell affect the anger of a man who so clearly doesn’t know what to do with it.

Colm, on the other hand, is so fascinating for the stoic resolve that he stretches to demented proportions, and Gleeson’s performance is a grumpy wonder for how it finds the character straining for a way to exorcise his own despair. “The Banshees of Inisherin” lingers in the mind more for its general aroma of gallows humor than it does for any particular lines, but certain exchanges have a way of crystallizing McDonagh’s purgatorial smirk. “Do you think God gives a damn about miniature donkeys?” someone asks. “I fear he doesn’t” Colm deadpans in response, likely before lopping off another finger.

This isn’t a film that strives for big laughs — McDonagh seems more interested in putting you in a particular frame of mind, even when doing so requires a fair bit of downtime and dead air — but its constant undercurrent of humor affords the story’s most pressing questions an appropriately ridiculous context, one that speaks to the absurdities of all existence. What do we owe to the other people in our lives, and how do we serve ourselves without hurting them in the process? The answers to such things are hard to come by in this world, least of all on the tiny island of Inisherin, but “Banshees” asks for them in such touchingly plaintive ways that even God’s silence is endowed with its own shuddering weight.

The Banshees of Inisherin 2022 Movie Review