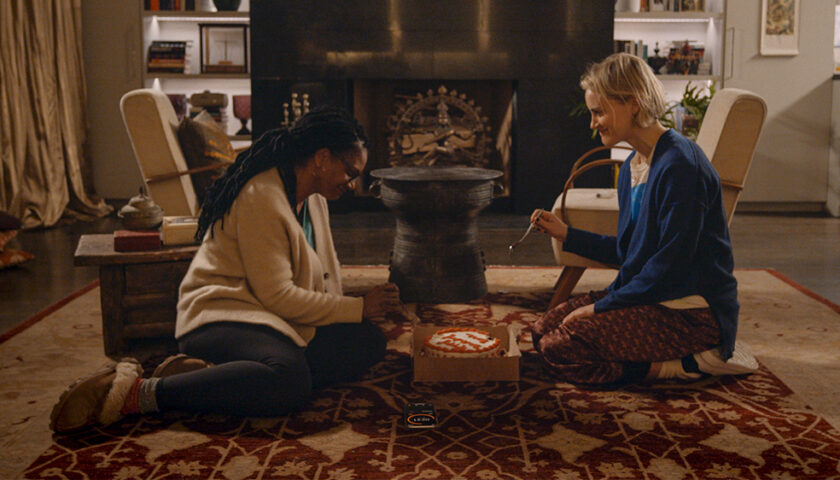 Five years ago, Michelle and Robert King created and executive produced a political satire entitled “BrainDead,” in which extraterrestrial insects began to crawl inside the ears of government officials and begin to take control of their words and actions. Since then, the prolific television scribes watched as science became politicized, especially amid the COVID-19 pandemic, and despite already having two ongoing drama series (“Evil” and “The Good Fight” for Paramount Plus) to run, they were inspired to step back into the world of satire with “The Bite.”

Written, produced and set during the pandemic, “The Bite” is centered on New York neighbors Rachel (Audra McDonald) and Lily (Taylor Schilling) who end up tasked with saving the world when a zombie virus emerges. That’s right, zombies. In addition to a global pandemic.

“I think it’s the only way to look at the craziness of what we’re going through and to take it to another level because if you just stay within COVID, it’s drama and what we wanted to do was add satire and comedy. And so, if you go a little further, you can comment on what’s going on now,” Robert King explains.

Rachel is an esteemed medical professional who starts the series off providing telehealth services to clients, and it is during one such session that she gets a sense there is something else slowly spreading: a client who has been bitten by an essential worker at his local grocery store experiences a severe drop in blood pressure. Eventually, Rachel witnesses his man dying (via the telehealth video chat service), reanimating and attacking his wife. Meanwhile, Lily is a writer currently paying her bills through online fetish work and encounters the new zombie problem when a client comes over for an in-person session, only to begin lumbering around her apartment in a way that makes her think he’s on bath salts. When she handcuffs him to her refrigerator door, he gnaws off his own hand — from which Rachel is then able to take blood and tissue samples to test.

The two women complement each other, not only because Lily acts as a stand-in for audience members who might need some of the science explained, Robert King points out, but because of their individual talents as well. “The whole reverse-contract tracing I thought was interesting because it’s a little bit of detective work, but it was more interesting to have Lily do it because she’s aware of how people work but not necessarily how science works [and] science can be pretty tedious,” he says.

Balancing scientific info with some of the show’s larger tonal swings was key for the Kings, who didn’t want the show to feel like a “Zoom science seminar.” Michelle King says an epidemiologist might look at the show “out of the corner of her eye,” but research was still important to the writers’ room process so they could make it sound “real enough.” Luckily, she adds, they not only had a writers’ assistant who is also a nurse, but also a staff writer who took a special interest in the science behind the story.

“We wanted to tell the story with government functionaries who weren’t the people you’d see on the news regularly,” she adds. “For example, we didn’t want either a fake president or to have somebody masquerade as the president. We wanted to be able to tell the story with people in the government but that you didn’t spend a lot of time thinking, ‘Oh there’s Mike Pence or whatever.’”

Having Rachel’s husband (Steven Pasquale) work for the CDC was a way to bring in some of these characters while still keeping the show focused on the human cost of the situation. When Rachel accidentally cuts herself during one of her tests, she becomes infected. He is able to come up with a solution to treat what the government has been called “Sun-9” (because no one likes the implication of the word “zombie”), but he is locked down miles away from her and trapped with a colleague who is rapidly changing herself, therefore forced to deliver the message by holding up a handwritten note to a live camera in a studio lit by red emergency lights. Rachel can’t quite make out the last part of the formula, so she mixes two versions of the treatment: one that should cure her, but one that will likely kill her.

“That the solution is a combination of Clorox and sunshine was meant to be a joke on our friend the ex-president,” Robert King points out.

Although another one of Lily’s clients has offered her a way to flee the city, she chooses to leave her apartment not to join him but to enter Rachel’s so that each one can take a treatment and the one who lives can carry the message out to whoever else is also still left alive.

“When we wrote the pilot we didn’t know where we were going [long-term], but then when we started to build the series it was clear it was about a female friendship,” says Robert King. “Especially after seeing what Audra and Taylor were doing, we knew we were ending up in a ‘Sleepless in Seattle’ design where two actors who are never together in the same room would end up together in the same room — and decide the fate of the world between them.”

The finale ends before the audience can get the answer of who lives and who dies, and both Kings tell Variety that they didn’t settle on an answer while they were work on the show. Robert King explains that he, personally, “didn’t want to know because I liked them both too much to kill one or the other.”

The six episodes were conceived and produced as a limited series, so the audience can imagine the outcome for themselves. Extending a character’s escapades beyond what plays out on screen may also be something the audience does for the delivery man who, no matter what size hoard of zombies lay in his path, kept doing his job — but whose journey was never followed beyond the moments he appeared at Rachel’s door.

“We thought if you saw a lot more it would ruin the mystique of the person,” Robert King says, adding they thought of him in the writers’ room as an essential worker who was just treating this new normal as “another day at the office” because in the real pandemic “that’s what essential workers were doing: Every time you ordered Seamless and someone showed up at the door it was a miracle!”

Equally magical may be how the Kings were able to put this show together while the pandemic raged on around them in the real world. They first began to work on the story idea in May of 2020, Michelle King recalls, when it was still unclear when productions would resume in-person filming. So they shaped the story in a way that would limit the number of actors who had to share physical spaces to share scenes, and for the majority of the ones that would, they cast significant others. Additionally, “A lot of the folks you see filmed in their own homes,” she adds, referencing characters such as Rachel and Lily’s clients. “They all live in the tri-state area and we brought them cameras that they then set up in their homes.”

The show went into production in the fall of 2020, creating a production hub in a rented brownstone in Hell’s Kitchen. The bottom two stories were turned into Rachel’s apartment set, with the top two being Lily’s apartment set. In the middle was a floor that house a control room.

“It almost resembled something you’d see for the Super Bowl. All these camera angles were on TV screens so there was no contact between crew and actors,” Robert King says. “At the end of the day when the actors left, the cameras would be rearranged and then digitally we had to remove the cameras from the scenes. It was a complicated process, but Michelle and I went in wanting this more than anything: a show where you were not aware of the Zoom restrictions. We wanted something that had action and some propulsion and intensity.”