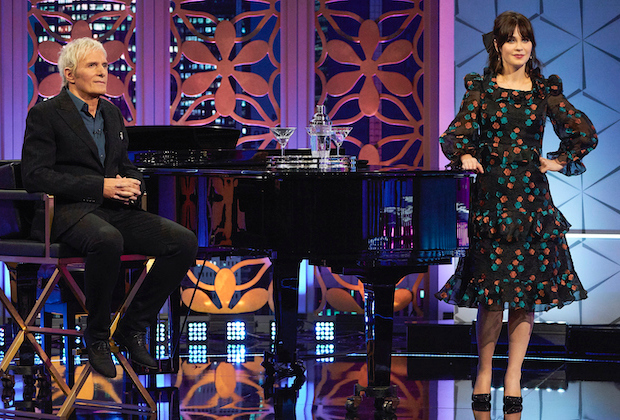 As we are all aware, linear broadcast TV is on the ropes. The advent of streaming means that it now takes something truly special for network television to cut through all the noise of the millions of choices constantly available to us. And this is why the ABC braintrust has finally figured out the one thing that everybody, regardless of age or gender or ethnicity, wants to watch. That’s right, a cheap and possibly ironic remake of a 56-year-old dating show. You’re welcome, viewers.

The Celebrity Dating Game, for this is that show, is an update of the ancient Chuck Barris format The Dating Game. What does it have that other iterations didn’t? Glad you asked. It has Zooey Deschanel and Michael Bolton as co-hosts.

“But are Zooey Deschanel and Michael Bolton sufficiently experienced to present a dating show?” you’re asking. Sadly not. Deschanel is many things – a brilliant actor, a seasoned singer – but on the basis of the first couple of episodes, her talents don’t quite stretch to “reading from a teleprompter without looking genuinely terrified”. Michael Bolton’s role on the show is less easy to pin down, but we’ll come to that in a moment.

Because first we need to address the biggest issue facing any show that gives itself the title The Celebrity Dating Game: it doesn’t feature any celebrities and nobody goes on any dates. Really it should just be called The Game, although that would confuse it with the David Fincher movie where Michael Douglas can’t work out whether he is participating in a piece of entertainment or actively being tortured. So maybe it is quite a good fit after all.

There’s a moment in the first episode that gives away the lack of celebrity quite profoundly. The mystery bachelorette asks her three bachelors, all sentient ham puppets shielded from her thanks to a giant wall, if they know who she is. One of them says Blake Lively. One of them says Demi Lovato. One of them says Taylor Swift. But the answer, in fact, is an entirely generic woman who once appeared on the reality show The Bachelorette. Her name was announced, and I immediately forgot it. This is the level of star the series has to work with.

Subsequent episodes are slightly better. Iggy Azalea pops up in episode two, who is at least a name if not a particularly relevant one, as does Carson Kressley from Drag Race. Nicole Byer from Nailed It also appears, but nobody ever guesses her identity and Deschanel has to essentially shout her resume at the winner over the closing titles. Byer does brilliantly, by the way. This is the sort of thing she should be hosting herself. But, still, it’s a highly awkward way for a date to end.

And, make no mistake, that is the end of the date. The wall draws back, the guest is introduced to the winner, they all stand there awkwardly dancing for 15 seconds and then the episode is over. What happens to the winners? Do they go out with the celebrity? Do they even talk to the celebrity backstage? There is no resolution whatsoever, which makes for a highly unsatisfactory viewing experience.

However, The Celebrity Dating Game does benefit from one legitimately strange format quirk. Remember I said that Michael Bolton is the co-host? What that means in reality is that, for the bulk of each episode, he sits silently next to a grand piano. He might offer the odd bizarre and apparently off-the-cuff response – when a guest asks how he is, he shrugs “I’m busy with this” – but for the most part he is simply set dressing. Until it happens.

Two thirds of the way through each episode, it falls upon Bolton to help the contestants out. Given the piddly nature of celebrity on offer, Bolton has to sing some clues about their identity to the contestants. And he does it in such an aggressively artless way that it’s worth the price of admission alone. For the bachelorette from The Bachelorette, for instance, he sings a rewritten version of Cher’s I Found Someone. “I found someone,” he croons. “She’s from Tuscaloosa / She was on The Bachelorette.” Meanwhile, for Azalea, he sings a version of Fleetwood Mac’s Don’t Stop updated to mention that she’s an Australian rapper. Then he names one of her songs. “Five Grammy noms / Five Grammy noms,” he adds at the end to be sure.

These performances feel like they’re being beamed in from a stranger, better version of the show. And that’s where The Celebrity Dating Game really falls down. Whoever made it can’t seem to decide whether it’s a straight remake of a classic format or a mockery of it. Many might favour the former. Personally, I’d prefer the latter. But stretched between these two poles, it doesn’t really satisfy anyone. Maybe just sit it out and wait for the Michael Bolton Describes C-List Celebrities In Song album instead.