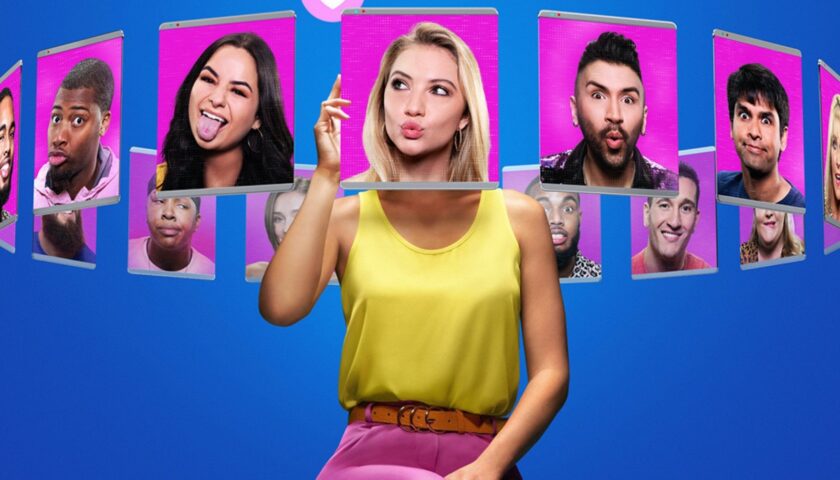 Opening Shot: Host Michelle Buteau is in a circular rooftop garden in the building where the contestants for The Circle will live. She describes it as “the real life game that asks how far you’d go to be popular on social media when there’s $100,000 at stake?”

The Gist: Here’s the idea behind The Circle: Eight contestants move into eight apartments in one building. They have no idea who each other are, and they interact with each other via a voice-activated Alexa-ish system called “The Circle,” which communicates via screens installed throughout the apartment. Some of the contestants have decided to be themselves, but others have decided to “catfish” the rest of the contestants, posing as someone else and trying to game the system. During each day, there are group chats, rankings, and side chats. But no one ever sees the real person behind each profile. At the end of each episode, one person is “Blocked” and goes home, replaced by a new contestant.

We see the contestants move in, set up their profiles and start to interact, with the cameras showing everyone’s reactions and commands as they put their profiles together, see each other’s profiles, then chat. They rank each profile on first impressions, and the top two “meet” (i.e. private chat) to see which of the bottom two gets “blocked.” The person who was “blocked” was ejected because the top two contestants didn’t think that person’s profile was real. Only it was real, albeit a bit vanilla.

Our Take: The Circle is adapted from a British reality competition that aired in 2018; Netflix is simultaneously releasing this U.S. version along with ones in France and Portugal. Its format is interesting and odd all at once. The idea that the contestants interact with each other Big Brother-style but without ever seeing each other opens things up for all sorts of fun and games. In fact, the most interesting contestants to us were Karyn and Seaburn, for the very reason that they decided to pose as other people.

It’s an odd format because what we see is a bunch of people alone in a well-appointed one-bedroom apartment, yelling at various screens and reacting to what’s going on on those screens. We know that the producers are encouraging the contestants to talk everything out, but the result is a bunch of scenes of people talking to the air like they’re in solitary confinement. It generates a lot of questions: Are they allowed to leave their apartments, other than to go into “The Hangout” to confer on who gets blocked? Do they go to take out the garbage? What is the purpose of that rooftop garden? Won’t the contestants go stir crazy not having any human contact during the time they’re playing the game?

One thing we do know is that, at least at the end of the first episode, the person who is blocked will meet a contestant face-to-face before leaving the building. It’s likely there to show the contestants that anything is possible; the profiles they think are fake aren’t and vice versa. And as the contestants attempt more flirting and various other attention-seeking behavior, the show will get more interesting. But right now, it’s just people shouting into the air, which is seriously odd and off-putting.

Sex and Skin: We’ll see if some of the contestants will resort to topless or bottomless photos to post on The Circle. For now, there isn’t any sex and not a lot of skin.

Parting Shot: When The Circle informs the contestants that the person who was blocked is on their way to meet one of the remaining residents, they all look shocked.
Sleeper Star: We’re not sure how Chris, a God-loving gay man who has a quip for every situation, hasn’t gotten his own show on Bravo yet.

Most Pilot-y Line: Michelle Buteau is a very funny stand-up comedian; she’s criminally underused in the first episode. We hear her give some lame quips about each contestant during her voice overs then see her on-camera here and there. But we’re not sure why she isn’t being unleashed to make comments that we are all making on our couches at home.

Our Call: STREAM IT. Once you get past the odd format, The Circle provides some reality TV thrills akin to what you see in Big Brother, with the added glee of seeing how far the catfishers get. In fact, we’re rooting for one of them to win the whole thing.