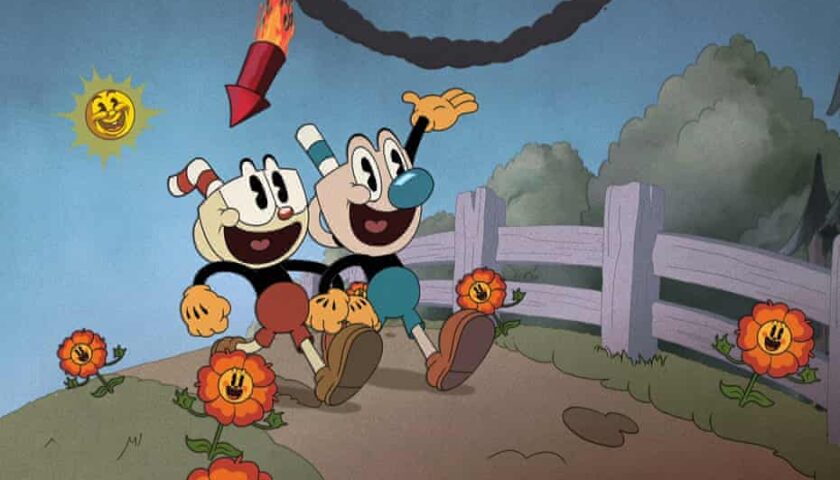 Netflix’s The Cuphead Show, like the 2017 Studio MDHR game from which it’s adapted, replicates the rubber hose animation style of the 1930s popularized by Walt Disney and Fleischer Studios. The series imagines a world of bouncy, stretchy-limbed characters where just about anything can gain sentience—and a pair of eyeballs.

But beyond some vintage title cards and a clear origin point for the art style, the inspiration doesn’t go quite as far as one might expect. Where the game draws from old cartoons in which dialogue often came second to action heavily synchronized to music, The Cuphead Show has just as much, if not more, in common with the constant chattering of latter-day animation.

Though silent in the game, Cuphead is voiced in the series by Tru Valentino in a squawky, old-timey accent that’s fitting for a character who talks about going to the “picture show” and refers to his brother, Mugman (Frank Todaro), as “Mugsy.” The headstrong Cuphead brags in an early episode that he will “double down” on any action he undertakes, while the timid Mugman goes along for the ride despite being horrified by his brother’s antics. Which is to say that they’re also a mismatched duo in a distinctly classic cartoon mold.

Most of the 12 episodes made available to press tell self-contained stories. The first finds the brothers running afoul of the Devil (Luke Millington-Drake), while other episodes feature antagonists as varied as a pair of wiseguy frogs, a bunch of freeloading vegetables, an ornery baby bottle, and a graveyard full of ghosts. Some do the bidding of the Devil, while others, in a nod to the typically disconnected nature of classic cartoons, are free agents.

Like the game, the series pays homage to the animated theatrical shorts of yore while eschewing their racist tropes. But minstrelsy is so ingrained within the fabric of those shorts that avoiding the signifiers of a racist heritage isn’t enough to put it in the rearview, as it’s still evident in the way that the characters behave and the most basic details of how they look.

In a 2017 Unwinnable essay, Yussef Cole argues that the game “essentially whitewashing” history, and that it inadvertently recreates certain stereotypes. Cole writes about the game’s story focus on gambling, noting that it was “an activity often linked in 1930s cartoons to the implied sinfulness and savagery of black Harlem and the era of swing music and jazz.”

It isn’t coincidental that the series minimizes the game’s gambling angle, depicting Cuphead as losing the rights to his soul during a carnival game rather than inside the black-furred Devil’s casino. Though King Dice (Wayne Brady), himself a caricature of Cab Calloway, also appears in the series with a largely unchanged appearance, he’s tweaked to function as the host of a rigged game show. If such changes are a little more successful at obscuring the minstrel roots of Cuphead’s primary influences, they’re a naïve concession. Changing the color of Cuphead and Mugman’s gloves from white to yellow, for example, hardly makes us forget about the origins of the attire, especially given that the brothers still have black torsos.

Many episodes are designed to play on well-trodden cartoon premises, like characters being trapped in a graveyard or being forced to care for a baby, but they’re still disappointing for their lack of narrative curveballs. Likewise, the locations are meant to be period-appropriate, with details such as two-piece telephones and radio as the main form of entertainment.

While the series certainly boasts a unique flavor as a result, it also feels restricted by those trappings, which is antithetical to the elastic, unconstrained reality of so many classic cartoons that gleefully shatter the fourth wall and the “reality” of time and place. The most absurd fun that The Cuphead Show has is when it references the brothers’ bizarre anatomy, like a scene where Cuphead rescues a goldfish by tossing it into the liquid inside his head.

The main draw here is clearly the vintage art style, and on its own terms, The Cuphead Show looks great. But no amount of overlaid film grain can obscure the rigidity of work primarily assisted by computers. Admittedly, old cartoons were created under arduous conditions, and the prospect of replicating their look by hand isn’t realistic. (In order to accomplish this for the game, the developers remortgaged their house.) But in making the leap to TV, Cuphead now lives on the same medium as the objects of its inspiration. The rubber hose animation of the ‘30s is a striking and novel skin to stretch over a traditional run-and-gun video game, but as a series of bite-sized stories, The Cuphead Show can’t help but come up short.