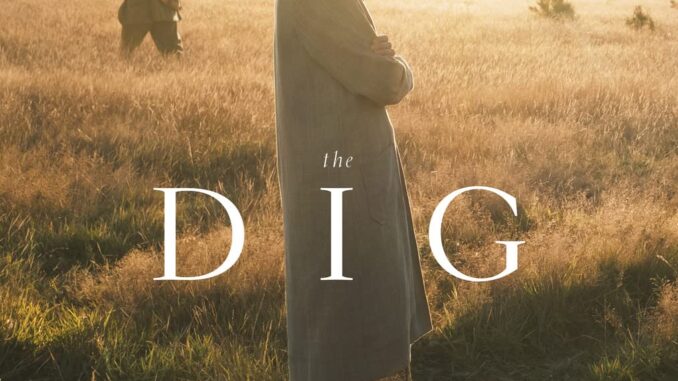 There is a gentle, old-world romance about the Netflix film The Dig, directed by Simon Stone, off a screenplay by Moira Buffini. Long tracking shots, wistful frames of the English countryside and some unforgettable visual compositions abound in this film that glides, but never really soars. Then again, it leaves you with the sense that soaring was perhaps never its intention in the first place.

The film is based on John Preston’s 2007 novel of the same name (which itself is a literary reimagination of the real-life archaeological discoveries at Sutton Hoo in England, just before World War II.) Carey Mulligan plays Edith Pretty, a widowed single mother with a large estate, who hires Basil Brown (Ralph Fiennes) to excavate a set of mounds on her property – they give Edith a ‘feeling’ that there’s something of significance underneath.

The film hits the ground running with regards to that particular mystery – you’re almost instantly curious about what could possibly lie underneath. Yet, very soon it also becomes about these two characters; and Mulligan and Fiennes are so effective at breathing life into them right away. Edith is a lonely woman, her son the joy of her life, and the curious mounds on her estate something of a project that drives her. Basil, on the other hand, is an ‘untrained’ archaeologist, but for whom digging into history is a calling, even if it’s a laborious profession that pays a pittance.

Europe is on the boil, a fascist dictator is merely days away from invading Poland, which would effectively put the entire continent in a state of war. And that’s the ticking clock that keeps things in motion – there’s a sense of urgency about the dig, because once the country goes to war, it won’t matter as much as other things would.

So, while the plot ostensibly shovels along, it also manages to pause and appreciate the point of archaeology, of looking for relics of the past, so much a part of our story as a species. These portions are perhaps the most enticing bits of the film, when the wise, brown-collar Basil and the striking, solitary figure of Edith appreciate the ramifications of digging for and discovering the corporeal remnants of lost history.

And while the older pair is obsessed with the past, Edith’s boy Robert looks to the stars. This is 1939, so space travel is still a few decades away; but the boy, with an issue of Amazing Stories in tow, is already enamoured with possibilities of the great beyond. Luckily for him, old Basil is a bit of an astronomy enthusiast as well, so he happens to own a telescope. The past and the future, thus, walk hand in hand.

As the dig and its subsequent discovery assumes greater proportions, additional characters quite literally walk into the story, and each of them eventually has a little strand of narrative running about their own little conflicts and demons. It’s here that the inherent melancholy of the film begins to dissipate, spreading itself thin over more characters than are strictly necessary.

One of the inherent messages of the film seems to be that all of the weight of history, and all of the possibilities of the future are intricately tied to every person who lives and dies, every soul in existence. The dig, then, is just another means of exploring familiar and universal that are also of great depth and heft. Still, its unwillingness to heighten its drama beyond a certain level means that a lot of avenues for it open up, but there’s no one big payoff in store. When you look back, you realise that payoffs were perhaps gently pervading through duration of the film.

The effort to stay away from the overtly dramatic is a constant feature of The Dig. Director Simon Stone, who has a large body of work in theatre, seems intent on making the picture not seem like a filmed play. So, you see very little conversation actually happening between characters. Instead, as they speak to each other, their dialogue is often overlaid with other visuals – poetic ones, pensive ones, intriguing ones; so much so that sometimes, scenes transition from one to the other over dialogue that isn’t necessarily occurring in either of them, but at some undefined point outside the two scenes in question.

That is why, perhaps, it is the imagery of the film that is its greatest asset. Cinematographer Mike Eley crafts some unexpected, haunting frames that you can’t help but admire. It is the visual strength of the film that makes it seem shorter than its 112-minute runtime, despite the fact that the film is longer it needed to be.

Its little mini-stories about a host of characters pulls it in too many different directions towards the end – a pity considering how much potential there was to explore the sensitive bond developing between Basil and the two Prettys, with the backdrop of the dig, the threat of war and those gorgeous visuals. The joys of The Dig are thus only sensory in nature; the emotions it portrays and attempts to evoke remain below the surface.