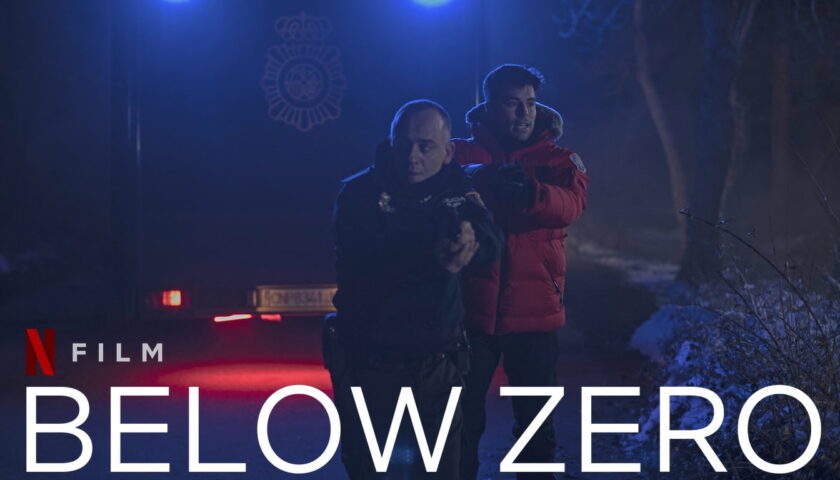 Below Zero is a film of two halves. The first sets up an intriguing and tense thriller for the second half to lean into, all guns blazing. With a prisoner VS guards scenario that looks set to explode at any moment, the midway point changes direction and starts to deliver a patchwork of influences for our characters to fight against. If you can look past some of the illogical scenarios, there’s a nice little Spanish guilty pleasure here.

As mentioned just now, the story feels like a mish-mash of different movies; a loosely stitched influence of weird and wonderful Hollywood titles over the years, both Indie and mainstream. You’ve got elements of Cube and Escape Room blended with Assault on Precinct 13 and sprinklings of survival movies like Arctic. All of this combines to deliver a constantly shifting and evolving movie that uses these tonal shifts to remain unpredictable and tense.

Some of that tensions stems from the basic premise which uses the conventional “little fish in a big pond” idea to showcase our hard-nosed prison officer Martin in over his head in the worst possible situation. Tasked with driving dangerous criminals across the country – thorough back-roads in the blustery winter conditions no less – disaster strikes.

What ensues from this tense build-up is a stand-off between Martin and the prisoners as they trade blows and gunshots while vying for control over the situation they find themselves in.

Interestingly, Below Zero throws in a nice little twist midway through, challenging the balance of power while trying to give a deeper meaning than a simple cops VS prisoners premise. While it does succeed in a way to deliver this, it perhaps could have been handled a little more elegantly than the bombastic end result we’re given.

This does translate nicely into Martin’s character arc though, with a satisfying enough ending to the journey for this character we’ve been following over the course of the movie.

Speaking of shades of grey though, a lot of this movie is shot at night, unfortunately giving this title a bit of a lighting problem. It’s not constant but there are times where a character’s face is bathed in darkness while they’re talking or reacting to what’s happening, making it difficult to see the actor in question at work.

The result is a film that has you itching to turn up the brightness during these segments. It’s not a deal breaker but is definitely something worth bearing in mind before jumping into this one.

Netflix movie Below Zero is armed with some nice action set pieces but feels far too stretched out for the story it’s trying to tell. The third act in particular is stretched out and loses some of that initial tension some prevalent early on. Yes it is a little silly, a little nonsensical and very much influenced by what’s come before, but there’s enough here to recommend nonetheless.