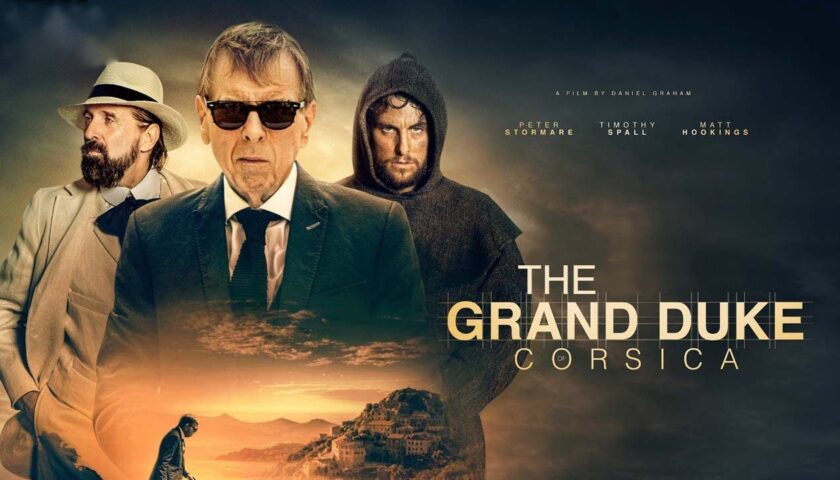 Trying to tell what The Obscure Life of the Grand Duke of Corsica is about doesn’t do the film justice. Qualifying the film as comedy, as it is known, is also by no means accurate. Because this second feature film by Daniel Graham, like its protagonists, cannot be pigeonholed.

Of course, there is plenty to say about The Obscure Life of the Grand Duke of Corsica . That the film is just as pretentious and absurd as its title, but also just as original and telling. That different storylines meet, support and overlap. That the cast is impressive and the visuals sublime. That the music beautifully encloses both the images and the dynamics between the characters.

The film is more than the story of main character Alfred Ratt (Timothy Spall), who is not the Grand Duke (Peter Stormare), but the architect who was lured to Malta by the nobleman to design and build a mausoleum for him. As quickly as this sentence is written and read, so complex and long is the road to this premise.

Ratt is first introduced, but before that we see a scene around a group of thirteenth century monks who are about to enter a small town. The leader of the couple, Saint Francis of Assisi, ponders aloud the superiority of the mind and soul over the body, but his lyrical monologue comes to an abrupt end when one of his followers has to give in to an urgent need of that mocked body. “It seems that you will never be completely detached from the body”, Francis sighs. An almost Monty Pythonesque scene, but a lot more subtle. Ratt can’t escape his aging body either. He watches with horror at his own decline – on his first appointment for an important assignment, he has to give his guts priority over his potential clients.

The banal processes of the body always go hand in hand with, or perhaps even form the basis for, the subtle reflections that the mind produces. Art, conservatism, humanity, life and death, altruism, friendships and love are reflected, sometimes in superior literary terms, sometimes in almost astonishing observations or heartfelt curses, with the line between irony and seriousness being delicate, if not at all. exists.

The developments in the film take place in carefully composed, eye-pleasing settings, whose colors and light always correspond to the atmosphere and heaviness of the events. For example, Ratt’s important appointment takes place in a classical art room lined with impressive classical murals, the party to which he is invited by the Grand Duke is a hedonistic spectacle drenched in saturated colors, and his encounter with the Count is surrounded by the darkness of approaching death. .

The story of the monks runs like a thread and a mirror to the present through the budding friendship between Ratt and the Duke. That story is another story within a story, or more precisely, a movie shot on the island that Ratt watches for inspiration. The protagonist in that film is a young, self-centered and vain actor (Matt Hookings), who turns out to play an unexpectedly large role in reality. It hardly matters that there is also a rapidly spreading epidemic, although Daniel Graham could not have imagined when the film was conceived that reality would once again prove more absurd than his fiction upon release.

In his opus, presented in five chapters, Graham shows himself to be a gifted and original storyteller, who is not bothered by film conventions and who delivers a coherent, beautiful, fascinating and witty product. He inevitably drags you into a slightly absurd and at the same time recognizable world, in which you as a viewer are surprised, entertained and sometimes moved.