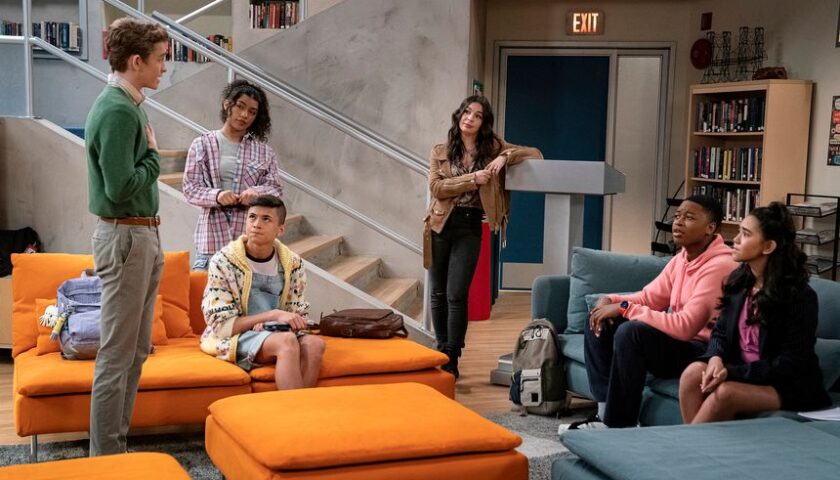 Things I remember about the original Head of the Class, which aired on ABC from 1986 to 1991: that terrific ensemble cast. Howard Hesseman, Robin Givens and the guy who’s now running Paramount Pictures? Come on! The opening credits and Ed Alton’s theme music. It’s a bop! The Moscow episodes. Your history books may say otherwise, but in my mind, the Cold War was ended by Rocky IV and Head of the Class.

Thing I don’t remember about the original Head of the Class: what the show’s actual premise was. As best I can explain, it was about a diverse group of nerds in the “Individualized Honors Program” at a Manhattan public school who relied on a permanent substitute teacher (Hesseman’s Charlie Moore) to impart lessons about life, or something to that effect. It was a show that generated its appeal around its cast and the often likable relationships among the very, very archetypal teen characters, all played by actors who appeared from the outset to be in their 30s (other than Tannis Vallely’s Janice, who was a prodigy and actually looked 11).

All of this is to say that Head of the Class was a successful show, and a generation — my, my, my generation, I suppose — has affection for it. Therefore, of course it would eventually be rebooted as a brand. But what exactly is that brand, and what is really to be gained from bringing it back? After watching three episodes of HBO Max’s new version, I’m still not sure. After a bumpy pilot, the sitcom settles into a low-key likable vibe. It’s a somewhat quaint and innocuous multi-cam that would have felt rousingly progressive in 1986 and would probably be too bland for ABC’s comedy lineup today, a show that neither gains anything nor loses much from tacking on the Head of the Class name.

The looseness of the premise is the main thing the new show has in common with the original, along with the participation of creators Rich Eustis and Michael Elias, who collaborate with new series developers Amy Pocha and Seth Cohen.

One Day at a Time favorite Isabella Gomez plays Alicia, a new teacher at some public school in what might be the Bay Area, though the location doesn’t matter in the slightest. Like the main character in Peacock’s A.P. Bio, in most ways a fresher and more direct remake of Head of the Class, it appears that Alicia is teaching just a single class — in this case, an honors debate elective initially populated by only five students. Nice work if you can get it!

The pilot for this new Head of the Class is just plain strange, primarily because it couldn’t be more obvious that the producers saw the opportunity to cast Gomez in the lead role and liked that idea, but then apparently didn’t have the time to do a full rewrite of the script around her. Dialogue positions Alicia as a tech sector burnout who turned to teaching because she wanted a job she could clock out of at 3 p.m. every day, a bit of personal background that she uses to encourage the kids to think of life outside the classroom. But this is not what Gomez is playing, nor should it be.

Anybody who watched One Day at a Time knows that Gomez’s giddy, geeky enthusiasm is a gift. That’s what she brings to the fore in subsequent episodes of Class, which appropriately center on her capacity as a youthful mentor, prone to excessive emotional investment in students who are basically her peers. This is clearly the right version of the character and the show. The resulting dynamics of episodes two and three contrast with the half-baked time-waster of a pilot.

I’d say you could skip the first episode entirely, but you’d miss some very fine work from Escalona, who after three episodes is very much the head of this Head of the Class. This is his first credit, and he’s instantly the show’s key source of humor and believable sentiment. Plus, in the third episode he gets to show off his vocal chops as part of a pleasantly ridiculous musical written by Jorge Diaz’s Elliot, an English teacher introduced ostensibly as a love interest for Alicia. Miles, who’s somewhere early in his coming-out process, is the only character here who couldn’t have been on a broadcast sitcom in the ’80s. Escalona and the expertly snarky Hall — Young Kim Wexler from Better Call Saul — can sell any punchline, however broad.

From Euphoria to HBO Max’s Generation and even the new Chucky, cable and streaming tend to lean into depictions of teenage life intended to give parents nightmares in the name of “authenticity.” Head of the Class goes to the other extreme, offering a portrait of high school in which social media provides only temporary and minor embarrassment, house parties are tepid affairs where people sit in well-lit rooms playing video games, and the kids become almost pathologically nervous when hanging out at a coffee shop with a member of the opposite sex. Somehow, despite using buzzwords like “cancel culture” as the topics for in-class debate prep, this Head of the Class manages to be even less topically edgy than the original series, which enjoyed a good Ronald Reagan joke and did, as I may have previously mentioned, end the Cold War.

Under the umbrella of “wholesomeness,” Head of the Class has a resemblance to Netflix all-ages retro multi-cams like Alexa & Katie or Mr. Iglesias. More Peacock’s Punky Brewster than Peacock’s Saved by the Bell, the second and third episodes of Head of the Class rise to the lofty pinnacle of “fine.” And, as with the original series, the show is probably more likely to offer select memorable elements — Gomez and Escalona, particularly — than to be uniformly memorable.