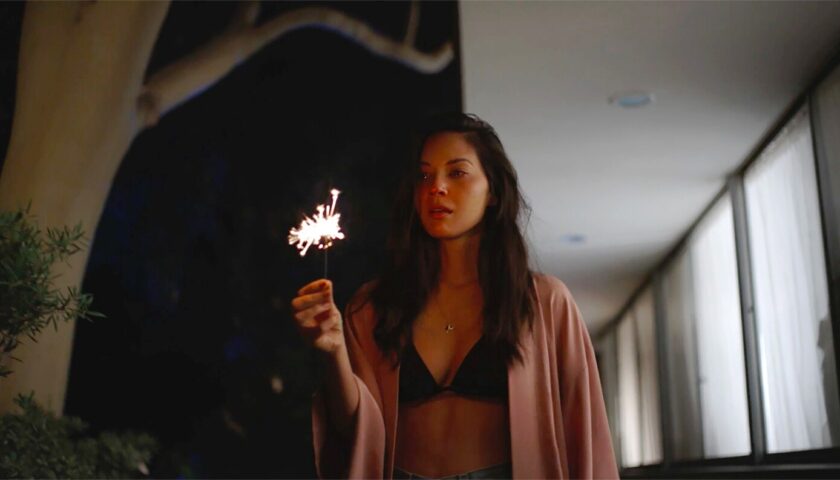 Actress Justine Bateman’s directorial and screenwriting debut immediately distinguishes her as an independent author with an original vision. And with Violet , the film is both extremely personal for Bateman and also deeply relatable: a portrait of a woman at a crossroads.

In the film, we follow a Los Angeles-based film executive named Violet (Olivia Munn) who works hard to secure her status in the industry, still dominated by white and older men, where she often sees situations beyond her dignity and her like for movies. And nothing is more difficult than your relationship with your boss (Dennis Boutsikaris) who is always exercising his power by regularly humiliating in front of customers. Violet presents herself as a confident, cold, and even insensitive person, but inside her is a cauldron of desperate anxieties about to explode.

The director then shows Violet’s daily life with bold cinematographic options such as the use of on-screen phrases that show the characters’ anxieties, the screen turns red as Violet’s emotions amplify, the use of sound to showing discomfort and of course a present and irritating voice (Justin Theroux) that always puts the protagonist down. The Voice is the film’s true antagonist.

The big surprise of the festival so far where Olivia Munn delivers a phenomenal work on Violet.

Director Justine Bateman throws us into the mind of this film producer who lives a constant battle to overcome her fears and anxieties represented by an inner voice that really is a super irritating presence both as a “character” and as a visual and technical effect. In Violet, the director delivers an extremely sensory feature as we, as spectators, feel a good part of the feelings that our protagonist feels, after all, we hear (and read in the signs that pop up on screen), we see the mixed scenes that represent everything how negative and derogatory she thinks about herself, and we also have the voice to say everything “wrong” that the young woman does, whether in her personal life or in her professional life.

And apart from the red screen that pops up when Violet starts to get annoyed about something.

And look, there is a lot to be angry about here. It’s the bastard boss who always tries to belittle you, steal your ideas, or not gamble on your projects (I want FoxRun yes!), the annoying coworkers who don’t seem to know that Violet is the head of the department and not the best their friend, the co-workers at a big Hollywood studio who always want to cross a line, the ex-boyfriend whose young girl has a tumultuous past, and the friend who seems to want to intrude rather than actually help and understand what Violet passes.

And Munn really seems to put himself on paper, one of the best of his career so far, to tell that story.

In Violet , we see the character need to put aside everything she knows is bad for her, but keeps in her life by keeping. It is a work of deconstruction and therapy with itself to evolve as a person and leave toxic people and behaviors aside. Whether it’s accepting that she is really good at her job (which she is and the film leaves no room for doubt, if you are in the movie market), bad events can happen, and sometimes a friend (Luke Bacey) can be more than just a friend but a life partner.

The aesthetic and visual options that Bateman chooses in Violet really set the tone for the feature, but it’s Munn’s captivating and magnetic presence that really makes the feature one of the biggest highlights of TIFF’s 2021 edition after being shown earlier this year. by other festivals. Violet delivers the film about the power of our minds and our own judgments, and how the ruler is always higher for some people and situations. And at the same time, Bateman delivers a completely realistic feature about trying to give your best in the job market and that there are many factors that indicate success or not.

In the end, Violet is a movie to watch and identify with what the director and lead actress want to tell. I’m rooting for a studio to buy and distribute the project so that more people can watch Violet, one of the most interesting films of 2021, without a doubt.