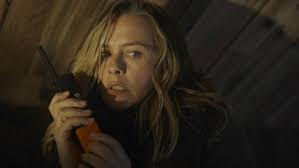 When we first meet Jake (Drew Van Acker), he’s living out the kind of back-to-nature existence that outdoorsy types might dream of. He catches fish from a stream and swims naked in its icy depths, not a trace of another soul in sight. Eventually, he hikes through the forest back to the cozy log cabin he shares with his dad, Troy (Stephen Moyer), to prepare the day’s catch for dinner.

We learn that it’s been this way for many years, Troy and Jake sharing a tiny utopia of two, far from the ruins of a destroyed world. But Last Survivors doesn’t only aim to offer up the usual pleasures of postapocalyptic thrillers like A Quiet Place or It Comes at Night — it also tries to deconstruct their dark appeal, with intriguing but uneven results.

As in all these stories, it’s not long before the family’s status quo is disrupted by an external force — here in the form of Henrietta (Alicia Silverstone, very sturdy in a smartly written role), a stranger who lives alone in the same woods. Though Jake and Troy generally take a kill-and-be-killed approach to outsiders, Jake can’t bring himself to pull the trigger when the time comes, and it’s not long before his idyllic life with Dad starts to fall apart.

Josh Janowicz’s script and Drew Mylrea’s direction fully embody the allure of these survivalist end-of-the-world narratives. Sure, Jake and Troy teeter on the razor edge of survival every single day, such that a single infection could spell death — but doesn’t life just look so peaceful out there in those pristine snowy woods? Don’t you envy Jake and Troy’s harmony with the natural world and their own primal instincts? Don’t you, too, wish you could reject the hollow comforts and hectic frivolities of modern life, and instead go to bed at the end of each day knowing you accomplished something simply by living to see another?

And then, having seduced the audience with those fantasies, Last Survivors peels away at the gloss to expose the toxic impulses undergirding them: the misanthropy, the misogyny, the misguided fixation on purity and simplicity at the cost of compassion and connection. The first time we hear of Troy’s belief that there’s no such thing as luck, only preparedness, it sounds like pragmatic self-sufficiency; after we’ve heard him rail against the evils of late human civilization a few too many times, we start to wonder what he makes of all the dead people who simply ran out of luck. It’s in this thematic throughline that Last Survivors feels most focused and deliberate.

But these ideas take a while to emerge, and on the way there, Last Survivors makes several critical blunders. It’s clear from early on that some secret is waiting to be revealed about what really happened at the end of the world. But the red flags are so big and so frequent as to become distracting, especially when some of them start pointing toward even bigger red herrings. I spent much of the first two acts driven to distraction by a single line of dialogue suggesting that Jake is unfamiliar with plastic, when there’s no way all plastic would have disintegrated in the 20-odd years since the apocalypse. I still don’t know if it was intended as a clue, or if it was just an instance of awkward writing.

The film’s clumsiness is most damaging in the case of its protagonist. It tracks that Jake’s insular life with his father has left him sheltered, even childlike: Of course he agrees with his dad on everything, because he’s literally never been exposed to any other options. But Jake is not a boy or a teenager or even an especially young man. The naiveté that might seem sweet or sad in a younger kid reads as confusing or even creepy coming from a character who looks closer to middle age than adolescence, and raises yet another pesky question of exactly how old Jake is supposed to be. (He is eventually revealed to be around 25, which does at least make more sense than the 35 that IMDb says Van Acker is.)

In part, that’s the point. We’re meant to understand that Jake has been stunted by his upbringing in ways he’s too clueless to even begin to comprehend. However, Last Survivors doesn’t lean nearly far enough into either the tragedy or the horror of his predicament. His interest in Henrietta has a queasy ambiguity, in that he seems to see her as both a mother figure and a romantic interest; his growing conflict with his dad, meanwhile, gives way to some earth-shattering secrets. And yet, faced with two situations that would make any therapist blurt out “a lot to unpack here,” Last Survivors skates right past their thorny depths in pursuit of more straightforward sentiment, underlined by David Deutsch’s angsty score.

Last Survivors can’t be accused of thoughtlessness — it’s clearly a film with a lot on its mind, one that’s eager to grapple with the gnarled roots of its own appeal. But its reticence keeps it from exploring the more challenging, and possibly more rewarding, paths laid out before it. It presents a story with the potential for intense horror, for unspeakable sadness, for a whole tangle of conflicting emotions that should put Jake, especially, through the wringer. Then, rather than go deeper toward the darkness, it turns too quickly to the light. Maybe that’s reasonable as an approach to life. But it’s a bit of a letdown for a movie.