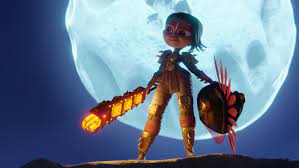 Every scene in Maya and the Three is a feast for the eyes. Deep golds, shimmering blues and fierce reds meld beautifully in this Netflix series about the adventures of a Mesoamerican teen who’s more interested in polishing her fighting skills than attending to her royal duties.

Created by The Book of Life director Jorge Gutiérrez, Maya and the Three is a grand fantasy adventure told in nine chapters, beginning on the day of the feisty protagonist’s coronation as princess of the Teca Kingdom. The first episode, “Chapter 1: Quinceañera,” opens with Maya (voiced by Zoe Saldana) recounting a tale that efficiently introduces us to her world and the prophecy that governs her kingdom, which sits above a lake tucked between verdant green hills. According to the legend, a mighty eagle and three jaguars will one day defeat the lords of the underworld.

A seamless transition from the 2D animation of the prophecy to Maya’s three-dimensional world follows. An eagle soars through the sky, and his flight is interspersed with a gleeful scene of kids playing in the square. It turns out that the eagle is Maya’s father, King Teca (voiced by Gutiérrez himself), and the three jaguars — Lance, Daggers and Shield — are her brothers (all voiced by Gael García Bernal). The first time we meet this quartet, they’re standing at the foot of Maya’s bed attempting to surprise the slumbering teen. But she’s seemingly unresponsive to their jollying and boasting. It’s not until the Queen (Sandra Equihua) interrupts them that we learn that Maya is gone.

On the other side of the kingdom, through the dense forest that separates the glorious temple from the rest of the world, Maya stands among a crowd eager to watch Bear Killah (John DiMaggio) take on his next opponent. Desperate to prove herself and eager to fight her hero, Maya challenges the burly figure. Their battle — like many in the series — is a sequence of blows and kicks enlivened by bold animation choices (Maya running against a background bursting with yellows and reds) and a lively soundscape.

Maya turns out to be a formidable opponent, causing a shift in the crowd’s enthusiasm. Suddenly they’re rooting for the young fighter, who decides to go by the name Eagle Claw instead of the less cool-sounding Eagle Foot. Whether Maya wins the fight is unclear, but she does end up with a nasty bruise around her eye and a dislocated shoulder, injuries we learn about in the next scene, when she’s back in her bed, under the care of her furious mother. Her coronation is in a few hours, and Maya is both injured and unprepared.

A central tension in Maya and the Three manifests between the lead character and her mother, who fail to see eye to eye. The Queen wonders aloud why Maya won’t behave, while Maya resents her mother for trying to turn her into someone she is not. Gutiérrez’s masterful screenplay succeeds at teasing out the stress these arguments put on their relationship without dumbing down the dialogue (a pitfall of many shows geared toward kids). I must also note that the series is deftly structured to give us room to understand Maya’s kingdom without undercutting the main dramatic thread.

After Maya and the Queen exchange a few tense words, a chambermaid ushers the soon-to-be princess away to help her prepare for her coronation. With this event, Gutiérrez doubles down on the series’ visual splendor; I imagine the festivities are just as marvelous for their fictional participants as they are for us viewers. Gold skulls hang from the layers of Maya’s variegated A-line dress, while her headpiece boasts a long staff with gold eagles on either end. Guests from other kingdoms possess their own signature styles as well, as in the purple accents of the outfits worn by the Gran Bruja (Queen Latifah) and her crew and the terra-cotta palette favored by the King and Princess of Barbarian.

Just as the celebration gets going, though, a threat emerges from the distance. Zatz (Diego Luna), the King of Bats, saunters up to the party and demands that Maya come with him, claiming that she is the daughter of Lady Micte, the Goddess of Death (Kate del Castillo). The news sends shockwaves through the party and distresses Maya the most. In a flurry of panic and much to the chagrin of the other leaders present, King Teca vows to protect Maya and declares war on the gods.

What happens next is an engaging and twisting adventure, rooted in the rich history of indigenous cultures and led by Maya, who is seeking answers about her past and trying to save her kingdom. Each episode offers opportunities to deepen our understanding of this fantastical world and to relish the visual depth of Gutiérrez’s adeptly constructed and absolutely stunning series.