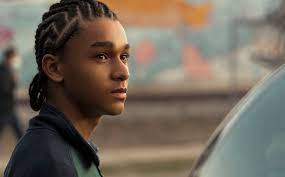 A useful exercise, before describing the new Netflix limited series Colin in Black & White as “too dogmatic” or “too on-the-nose” or “lacking in subtlety” is to take five minutes to search Colin Kaepernick’s name on Twitter or your favorite social media platform.

Kaepernick hasn’t played an NFL game since he was informally blacklisted in 2017 — I can give you a list of some of the names of inept third-string quarterbacks who have started games in recent years, if you somehow think his unemployment is based exclusively on talent — but he remains a figure who generates binary reactions. Either he’s a crusader and martyr to a cause or else he’s … let’s just say that Colin Kaepernick’s detractors are rarely graceful in their selection of words.

The show’s title refers to that split in people’s perceptions of Kaepernick as much as it refers to the racial binary in which the athlete has always felt trapped. It refers as well to the bluntness of the series that Kaepernick created with Ava DuVernay, six half-hour episodes that swing between wildly perceptive and entirely self-obsessed, between artistic innovation and bland formula, between being a show that I thought could and should be watched by everybody and being a show whose target audience may only be Kaepernick himself.

Structurally, Kaepernick and DuVernay, with Michael Starrbury as showrunner, have built something complex, if not always successful. A coming-of-age story — basically an early-’00s version of The Wonder Years — is buoyed by a terrific performance from Jaden Michael as “Young Colin.” The story is used as a framing device for documentary-style vignettes that decode racialized language, explain the Doll Test (the classic psychological experiment in which Black children were given the choice between Black and white dolls; most chose the latter, proving the harmful effects of racism on kids), or offer biographical sketches of figures like DJ Kool Herc and Allen Iverson. Structured around all this are sequences in which present-day Kaepernick walks through various backdrops, sometimes viewing his youth like dioramas in a museum, a setup that presumably mirrors the way he’s spent his time since becoming famous: being critiqued, examined, poked and prodded, put on display.

Colin in Black & White focuses on Young Colin as he pursues his football dream, with Michael leaning into Kaepernick’s insecurities in a very likable and believable way. As a scrawny eighth grader, Colin tries to convince high school coaches that he can play quarterback; as a somewhat less scrawny high school senior, he tries to convince college coaches that he can play quarterback. Though his field skills and determination speak for themselves, his main stumbling block comes in the form of other people’s perceptions of him, whether they’re the universally white football mentors who don’t see in Colin what they view as the “prototype” for his position, or the various authority figures who cannot see past what they consider racial signifiers: Colin’s hair, his sense of satire, even his taste in women.

More than anything, perhaps, the challenges of perception that Colin faces are internal. Normal adolescent identity struggles are amplified by his need to be recognized for his athletic excellence, and by questions of racial identity. His white adoptive parents (played by Nick Offerman and Mary-Louise Parker) are thoroughly well-meaning and thoroughly incapable of understanding what it means to be biracial in a world that sees things in black and white.

Every episode finds Colin facing a different thematic impediment and finding a lesson to learn, all with the built-in dramatic irony that anybody watching the series will be fully aware of Kaepernick’s college and NFL success as well as the on-field and off-field elements that contributed to his current situation, for worse or better, as a crusader against systemic inequality and an unemployed football player.

Young Colin must deal with racism from hotel workers and cops, has an awakening at a Black barbershop, makes a tough choice for a homecoming date, and confronts a football mind-set that has stood in the way of advancement for Black quarterbacks for decades. As specific as his experiences are, almost anybody who has ever felt like an outsider or been told their dreams were unrealistic can relate to them, or possibly to the effect on Young Colin of the exhausting whiteness embodied by Offerman and Parker, who are rarely given any other qualities to play. Somewhat less relatable, though built around the same thematic lines, is the show’s bigger arc, in which Young Colin repeatedly mopes about people encouraging him to concentrate on baseball, where he was considered a pro pitching prospect, when what he wants to do is play football.

It isn’t as easy to feel empathy for Young Colin pouting when he’s told he could sign a million-dollar baseball contract out of high school, but one of the most frequent charges leveled against Kaepernick in recent years is that if he actually loved football, he would just shut up, stand for the national anthem and play football. This questioning of his passion is the argument that people think they can make against Kaepernick without sounding racist. But Colin in Black & White delves into that love for football and what it has cost him, and it brings out exactly those racially inflected undertones that haters would pretend don’t exist.

The show’s nonfiction vignettes are strong, especially when they focus on lesser-known Black cultural figures, including athlete-turned-artist Romare Bearden. They’re told using animation and collage, and when I think about Colin in Black & White as a show whose target demographic is probably viewers in roughly the age range of Young Colin, the show feels illuminating and progressive. It puts Kaepernick’s political activism and the responses to it into a wide-ranging historical context that might even reach viewers who are skeptical or antagonistic toward the idea of protest. So maybe the show’s ideal audience demo is viewers of Young Colin’s age and their initially less open-minded parents? In these segments, the series is confrontational and pulls no punches, whether implicating easy and obvious targets like Donald Trump or picking apart terminology that sports fans might take for granted.

It’s less easy to warm to the long stretches in which an impeccably dressed Kaepernick gives what amounts to a glorified TED Talk, dripping with frustration when comparing the NFL combine to a slave auction, or quoting German historian Christoph Meiners’ division of humanity into the “beautiful White race” and the “ugly Black race,” or just voicing his lifelong insecurities about never being anybody’s first choice. In almost all cases, Kaepernick’s observations set up what each episode will be about, but he isn’t a natural enough screen presence to justify introductions that can run between three and five minutes. I wouldn’t want to lose his cameos entirely, though; there’s something very poignant about his simulated reactions to re-creations of his adolescence, and Michael’s performance is even better when you can compare it to the real thing.

At the helm of the first episode, DuVernay establishes a strong energy, but subsequent directors can’t maintain the necessary balance of elements and tone. The Young Colin segments are occasionally quite funny, and the Older Colin pieces are understandably indignant, to the point of simmering rage. A show with points to make and a charming story to tell, Colin in Black & White isn’t always able to do both things at the same time.