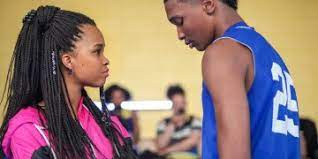 There are shows that take a few episodes to find their groove, and then there are shows that feel fully formed from the jump. Swagger fits into the latter camp. Though it’s set in a niche that’ll be foreign to most viewers — elite youth basketball in the Washington metropolitan area — creator Reggie Rock Bythewood constructs a world so richly realized that there’s no doubt in our minds it existed long before we were invited in, and will continue to exist long after we leave. Add vivid characters and sharp storytelling, and it takes only a few episodes for Swagger to establish itself as one of the best new series of the year.

Our entry into this universe is Jace Carson (Isaiah Hill), a 14-year-old basketball phenom already being singled out by coaches and scouts as a probable future NBA star. In tried-and-true sports drama fashion, he just needs a mentor who’ll bring out the best in him. He and his mother, Jenna (Shinelle Azoroh, tough and graceful), believe they’ve found one in Ike “Icon” Edwards (O’Shea Jackson Jr., magnificent in the meaty leading role he deserves). If Jace is Swagger‘s rising star, Ike is its anchor, a former teen basketball prodigy who flamed out before he went pro, and now makes it his explicit mission to build not just ballplayers but young men.

Swagger takes “show, don’t tell” to heart in a way that too few other series do. Bythewood and his writers often pass over the obvious lines, trusting the actors to communicate through loaded gazes or pursed lips as well as their words. The show has style to spare, but its most striking flourishes exist not to show off for their own sake, or to fulfill some tired expectation of what “prestige TV” is supposed to look like, but to serve the story at hand: The frame might zoom in to horror-movie proportions to convey a character’s fear, or the audio might become muffled as one player becomes laser-focused on another.

And Swagger‘s enthusiasm for the sport comes through loud and clear in its game scenes. The camera weaves through intricate choreography of the players to let them show off their moves (and, to my admittedly basketball-illiterate eye, these young actors do look like they can move). It captures some of the pleasure of seeing bodies in motion that watching real sports provides, even as the scripts capture the heated drama and intense pressure that can also come with the game. The series is touted as being inspired by the adolescent experiences of executive producer (and NBA star) Kevin Durant, and while I can’t speak to its technical accuracy, there’s a worn-in quality to its ecosystem that suggests someone working on the show has thought through every inch of it.

But Swagger is equally concerned with what happens off the court. The series does not shy away from harsher, darker realities of its characters’ lives. There are storylines about child abuse and sexual assault. Cyberbullying exists as a low but steady thrum on social media. The threat of the coronavirus (the series begins “Before ABC: Ahmaud, Breonna, COVID”) begins as background noise until suddenly it’s front-and-center. Likewise, an incident in the pilot — Jace is confronted by police simply for taking out the trash while looking like a tall Black man — suggests that police brutality casts a shadow over the kids’ lives. Later in the 10-episode season, this becomes a major focal point.

A lesser show might buckle under the weight of all such heavy-duty issues. But while Swagger does wobble here and there, it handles most of these plot points as deftly as its characters do a ball, by prioritizing the people at the center of the stories rather than reverse-engineering teachable moments or shoehorning in awkward references. By the time each of those storylines reaches a boiling point, the kids’ reactions feel true to the people we know them to be, however impulsive or ill-advised some of their responses might feel. Swagger knows both that 14 is too young to have the weight of the world on one’s shoulders, and that plenty of 14-year-olds are forced to carry that weight anyway.

Just as crucially, the series also understands there’s room even in hard times for silliness and tenderness. As somber as some of the storylines can be, Swagger is frequently a delight to watch, especially in moments when the boys are allowed to relax into their easy camaraderie. They rap and dance in the locker room before games, tease each other about their haircuts and test their charms on girls. (There’s a lovely and distinct echo of Love & Basketball, by Bythewood’s wife, writer-director Gina Prince-Bythewood, in the dynamic that emerges between Jace and his best friend, Crystal, played by Quvenzhané Wallis.) And for every harsh blow, there are moments of compassion — often extended by Ike, who, like Ted Lasso or Eric Taylor before him, is as much father figure as coach. In a world too quick to rob Black kids of their childhoods, Ike positions himself as a protective shield and a voice of reason.

Ike sums up his coaching philosophy a few times over the course of the season, but it’s in the finale that he puts it most plainly: “A good coach leads with love.” More than anything, it’s love that radiates from every detail in Swagger: love of this game, love of this neighborhood, love of this community — and, above all, love for the gangly teenagers standing in its center. What works for Ike turns out to work for Bythewood as well. Like a team at the top of its league, Swagger is in perfect harmony with itself.